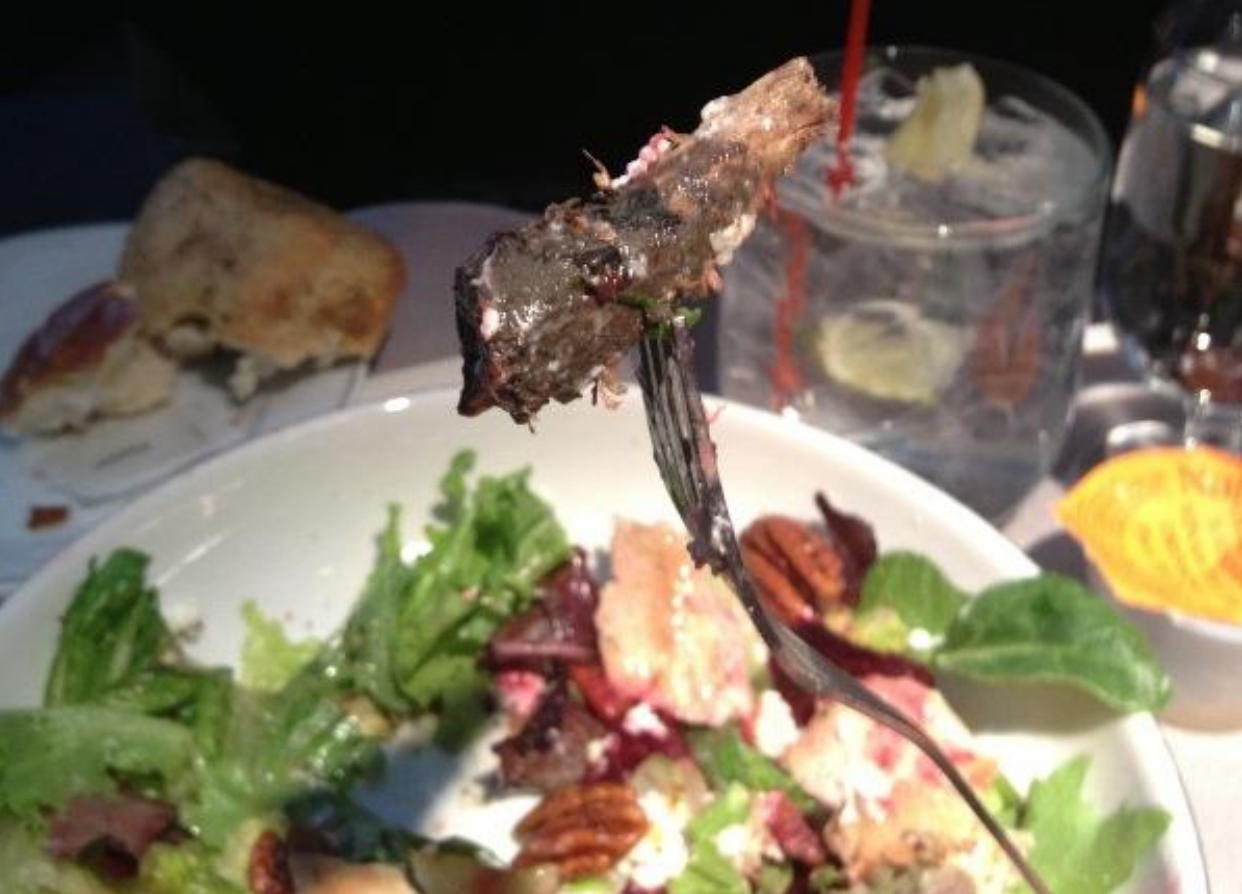 If you’re a regular reader of this site, it may seem hard to believe, but even first-class passengers sometimes need help.

Randall Hartwick is one such person, a man whose case of an unpalatable airline meal appears to be the victim of a merger — in this case, the unfortunate combination of American Airlines and US Airways.

Last summer, Hartwick and his wife were passengers on an American Airlines flight from Dallas to New York’s LaGuardia International Airport. The airline upgraded him to first class.

And that’s where our story begins.

The flight was going well until our lunch was served.

I ordered the chicken salad and began eating my meal. When I had finished about half of my meal, I moved a piece of lettuce, and underneath it, was the most disgusting thing I have ever seen on a plate.

I don’t know if it was plant, animal or something else, but it was dark brown and very large. It was slimy on the outside, but so hard I couldn’t push my fork through it.

I have a pretty strong stomach, but it took all I had not to vomit. After discovering this thing on my plate, it occurred to me that I since I had already eaten half of my meal, it was as if I had put this brown, slimy object of unknown origin in my mouth.

Quite honestly, I have not been the same since.

I have no idea what types of bacteria or disease this item may have contained and what I may have been exposed to.

Hartwick snapped some photos of the foreign object in his meal. He summoned a flight attendant.

“She took the object, bagged it, and told me she would file a report, send the object to a lab for analysis and provide me with the results of the analysis,” he says. “I have sent several letters and made several phone calls to get absolutely nowhere.”

To even be on a flight that serves food is a rarity, and as a platinum-level elite, Hartwick was sitting in the good seats while others on the plane suffered in the squalor of modern-day economy class, complete with zero seat pitch, sensory deprivation and “you-get-what-you-pay-for” attitude from the crew members. Well, that may be a bit of an overstatement, but my point is, the contrast between the “haves” and “have-nots” is stark.

To some readers, this complaint almost rises to the level of those whiny elite-level frequent flier apologists asking me to strong-arm an airline into honoring a mistake airfare.

But not quite. This passenger has a legitimate grievance. Once you get past the airline industry’s caste fixation, it’s pretty clear that he received a substandard product, and was then strung along for months.

Not exactly the American way, is it?

Eventually, the case made it to the right person’s desk. Out of the blue, a claims adjuster from American phoned Hartwick and offered $500 to settle the case.

“Although my initial complaint was with the food, it has escalated to a total lack of follow-through on American’s part,” he says. “I still have not seen any analysis of the object, so I have no idea what I was exposed to.”

Fair enough. I checked with American, which was quick to point out that the incident occurred before the merger.

“It may be tough to track down folks who have personal knowledge and we may need to search records,” a representative told me.

What’s more, the incident had been escalated beyond customer service and into the hands of the risk management department, which handles claims of this nature.

American agreed to follow up with Hartwick and share the internal documents he’d been promised. As to sweetening the $500 offer, that seems unlikely.

So today’s question is, would you take $500 from American Airlines if you found something dark and slimy in your salad?