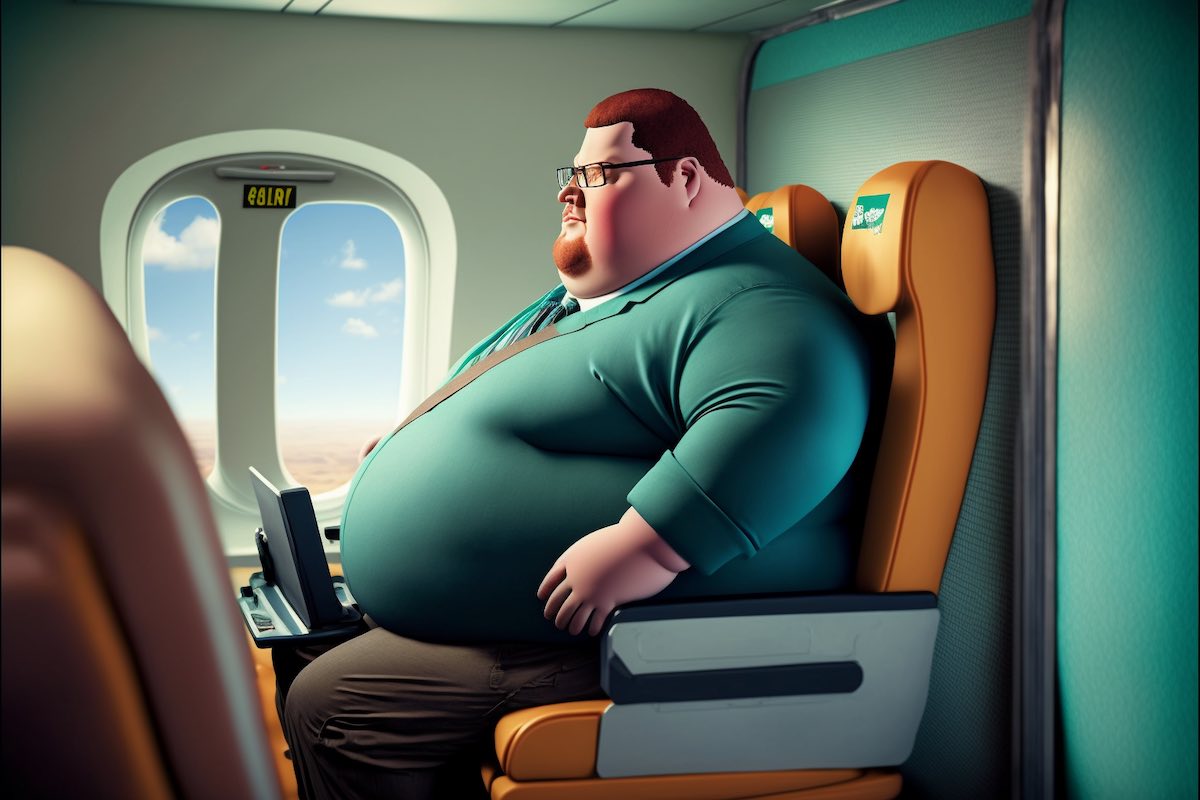 Why would anyone stand for that long? Because he says a morbidly obese passenger seated next to him was spilling into his personal space, making it impossible to sit in his assigned seat, and the flight was completely full.

Telling an airline passenger who can’t fit into a seat to stand is pretty unusual. But it happens. The question is, what should the airline do about it?

Before answering, let’s review some of the specifics of Berkowitz’s complaint. He boarded the flight on July 29, and was grateful to find an empty middle seat next to him. But that gratitude turned to horror when the airline sent a late-boarding passenger who weighed more than 400 pounds to the seat. It was the last empty one on the plane.

“His size required both armrests to be raised up and allowed for his body to cover half of my seat,” he says.

Berkowitz immediately notified the flight attendants about the passenger.

“They were sympathetic, but could not do anything,” he recalls. “No other seats existed on the plane. They would not permit me to sit in their jump seats, and fully acknowledged the mistake by their gate agent, in allowing this individual on a plane without requiring him to purchase and occupy two seats.”

Hurtigruten Group is the undisputed global leader in sustainable cruising. Building on 130 years of Norwegian pioneering heritage, the Group’s storied Coastal Express has been carrying travelers, locals, and goods along Norway’s coast since 1893. When the operator initiated its first cruise to the Arctic in 1896, it founded expedition cruising. Today, Hurtigruten Expeditions is the world’s largest expedition cruise line, offering big adventures on small, custom-built ships – including the world’s first battery hybrid-powered cruise ship – to over 250 destinations from Pole to Pole, including the Galapagos and West Africa. Hurtigruten Group is revolutionizing the travel industry’s approach to sustainability (more about Hurtigruten's sustainability efforts here).

That wasn’t just a comfort issue, according to Berkowitz. It was also a safety problem.

“It did not allow me to use my seatbelt during takeoff and landing as well as required me to stand in the aisle and galley area for most of the seven-hour plus flight,” he says.

After he returned, he wrote a brief, polite email to the airline, asking it to refund his fare or for a voucher for the full amount. He also reported the incident to authorities, citing his safety concerns.

US Airways responded with an email that described his travel experience as “regrettable” and apologized for the “difficulties” he encountered.

“Our intention is to offer the best travel experience possible,” it added. “The details you have provided indicate that we have failed to meet our intentions.”

The airline offered a $200 voucher for Berkowitz’s trouble. It didn’t address any of his safety issues.

He wasn’t happy with that, so he contacted me. I reviewed his case and agreed with him that US Airways might want to take another look at his complaint. I mean, leaving a passenger with no alternative but to stand for almost seven hours — if that’s true, then this might be one of those rare cases when a full refund is in order.

I contacted US Airways on his behalf. A representative told me US Airways had made its last, best offer. It didn’t say anything about the safety concerns this case raises.

Berkowitz says the airline is missing the point. It glosses over the safety problems created by allowing overweight passengers to buy one seat.

Editor’s note: Since this story appeared in 2011, the problem of small airline seats has only gotten worse. The FAA says it is considering minimum seat standards, but so far, has done nothing.

Christopher Elliott is the founder of Elliott Advocacy, a 501(c)(3) nonprofit organization that empowers consumers to solve their problems and helps those who can't. He's the author of numerous books on consumer advocacy and writes weekly columns for King Features Syndicate, USA Today, Forbes and the Washington Post. He also publishes Elliott Confidential, a critically acclaimed newsletter about customer service. If you have a consumer problem you can't solve, contact him directly through his advocacy website. You can also follow him on Twitter, Facebook, and LinkedIn, or sign up for his daily newsletter. Read more of Christopher's articles here.
20913