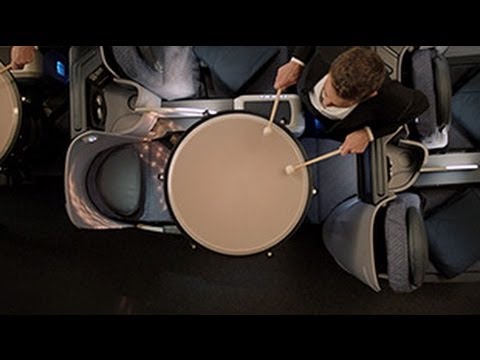 OK, I’ll admit that I poke fun at the “entitleds” behind the curtain as much as the next guy wedged into one of those sardine-class airline seats.

Oh, those elites whining about the temperature of their Chardonnay or the service that isn’t sufficiently obsequious. To have their problems!

And honestly, I wouldn’t even mention the following case unless the airline in question had started making so much noise about its superior comfort and friendliness, especially in the front of the cabin.

No need to sit through the entire video. Take it from me: It’s slick, it’s inspiring and there’s absolutely no way they filmed that in actual economy class seats.


Ever tried to play a trombone with only 32 inches of room in front of you? How about that cello?

Some industry cheerleaders apparently didn’t bother watching the rest of the videos (yeah, there are more ads) and missed the ones that laid it out for the rest of us mere mortals. Simply put, we are not part of the equation this time.

“Built around you” friendly? Tell that to the saps in the back who have everything around them, including flight attendants with that trademark “you-get-what-you-pay-for” attitude.

All of which brings us to this morning’s case, in which Karen Fierer flew from Newark to Tel Aviv under less-than-friendly circumstances.

“It would not recline,” she says. “Several flight attendants tried to fix it, to no avail. I ended up having paid for a first class seat that I had to sit upright in for the entire night.”

Now, if this had happened in economy class, I’d say, “Walk it off, Fierer.”

In Economy Plus, I’d say: take the voucher and the apology, and go in peace.

But in “friendly” first class, for which she paid $3,624? No, this passenger has a right to be upset.

United sent her a cheerful form email apologizing for the trouble and offering her a choice between a 15,000 mileage deposit or an electronic travel certificate valued at $300. She wants a refund, but will settle for a partial refund — the difference between an economy class seat and a first-class seat.

Even if United agreed to such a refund, it would do what I call “funny airline math.” Rather than pulling up the most common type of fare, a less expensive advance-purchase ticket, it would probably use a full-fare ticket as a base, which costs two to three times more. It might also “adjust” the fare, adding taxes or fuel surcharges to the price in order to lessen the amount of the refund.

Go ahead and laugh — I’ve seen them do it.

Fierer appealed the decision to the United contacts listed on my site, but they wouldn’t do anything. Now she wants me to get involved.

If United really wants to be “friendly” — if not in person, then in the amenities it offers passengers — then this is as good a time as any to show it. I realize a non-reclining seat is a relatively small problem in the overall scheme of things. But if you’re selling a lie-flat seat on an overnight flight, then dammit, shouldn’t the thing let you lie flat?