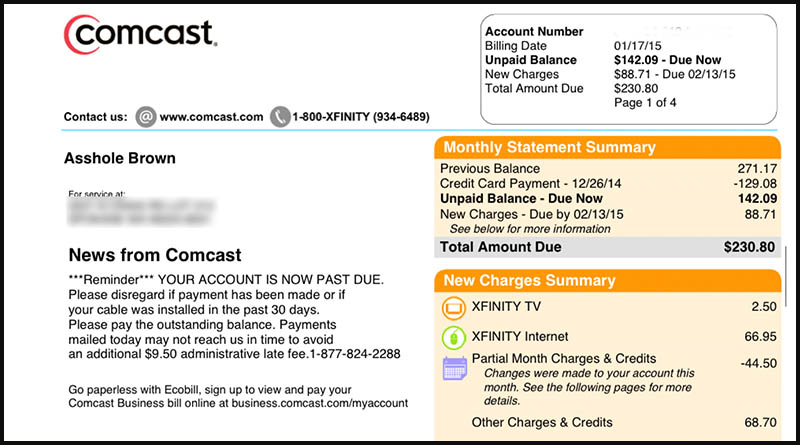 Warning: This post contains language that may not be appropriate for a family audience.

It’s no secret that employees sometimes feel their customers are jerks. But I’ve never seen one put it in writing — until now.

Lisa Brown, a volunteer for a missions organization in Spokane, Wash., contacted me about a billing problem with Comcast, her local cable provider. The issue? Someone at Comcast changed the name on their bill from her husband’s name, Ricardo, to “Asshole” Brown.

Brown has tried to fix the name herself. She’s visited her local Comcast office and phoned higher-ups in the Washington region. But she wasn’t getting anywhere and needed help.

My first thought was that someone was trying to pull a practical joke on a consumer advocate. So I asked for a copy of the billing statement and the correspondence between her and Comcast.

And no kidding, it looked like someone had changed the name. How impolite!

Next, I contacted Comcast to find out what its records said. It’s fairly easy for any customer to doctor a photo of a bill to shame a large company, so I wanted to make sure the company was seeing the same thing.

A few minutes later, I received a call from Steve Kipp, Comcast’s vice president of communications for the Washington region.

“We have spoken with our customer and apologized for this completely unacceptable and inappropriate name change,” he said. “Comcast has zero tolerance for this type of disrespectful behavior and are conducting a thorough investigation to determine what happened. We are working with our customer to make this right and will take appropriate steps to prevent this from happening again.”

I asked Brown why an employee might want to change Ricardo’s name to Asshole.

“I am shocked,” she told me. She explained that her family was having financial difficulties and needed to reduce their cable bill. She’d called Comcast to cancel the cable portion of her account, for which she had to pay a $60 fee. Instead of complying immediately, a representative escalated her call to a retention specialist, who tried to persuade her to keep the cable service and sign a new two-year contract.

“I was never rude,” she says. “It could have been that person was upset because I didn’t take the offer.”

What is a fair resolution from Comcast?

Brown, who has been a Comcast customer for the last two years, believes the company should offer a more generous refund. Also, she wants to send a letter to Comcast’s vice president in charge of customer service.

Comcast quickly made steps toward fulfilling her wishes. First, there was a call from Rhonda Weaver, a Comcast senior director of government affairs, promising to waive the $60 cancellation fee. Weaver also said Comcast was investigating the name change and would terminate the employee who was responsible.

Then there was a call from Ken Watts, a Comcast general manager for Spokane. He assured her they’d corrected the name on her account. He also promised a swift investigation and that he would find the vice president’s address.

(Well, I can probably help with that: here are the Comcast executive emails.)

“This is unacceptable,” she says. “I am requesting everything back I paid Comcast for doing this to me.”

But what is enough?

Should Comcast refund two years’ worth of cable bills? Or is an apology, a refund of the cancellation fee, and firing the employee, enough?

Here’s hoping Comcast’s other reps will keep their opinions of their customers to themselves. Based on their customer service scores, we kinda know what they’re thinking.

Do we really need to have it in writing?

Update (noon, 1/29): Comcast has issued a more detailed response to this incident.

Note: Since this story first appeared in 2015, I’ve received numerous other complaints from consumers who had been dissed by the customer service department. Among them: Home Depot allegedly used an “extremely offensive” epithet to describe this customer. And Comcast seemed to go for a repeat (it didn’t) one other.

Christopher Elliott is the founder of Elliott Advocacy, a 501(c)(3) nonprofit organization that empowers consumers to solve their problems and helps those who can't. He's the author of numerous books on consumer advocacy and writes weekly columns for King Features Syndicate, USA Today, Forbes and the Washington Post. He also publishes Elliott Confidential, a critically acclaimed newsletter about customer service. If you have a consumer problem you can't solve, contact him directly through his advocacy website. You can also follow him on Twitter, Facebook, and LinkedIn, or sign up for his daily newsletter. Read more of Christopher's articles here.
36444