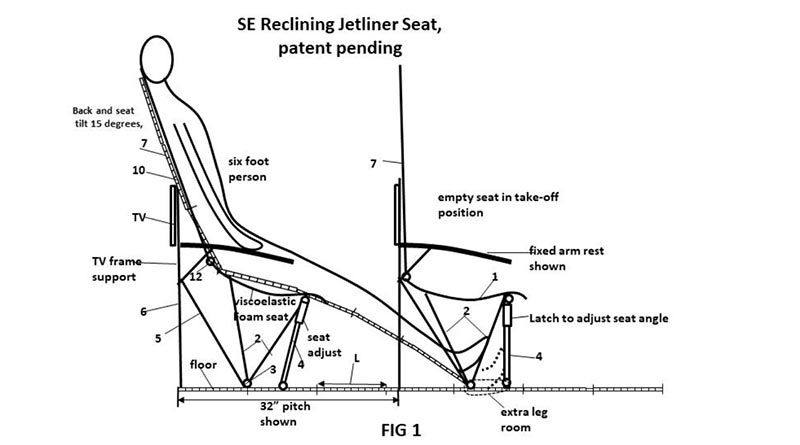 A new patent-pending design developed by Lloyd Weaver and Burk Daggett of the Bend, Ore., design firm SE Aeronautics promises to end the nightmare of millions of airline passengers by offering extra legroom, almost enough recline so you can sleep, and business-class level comfort.

If only they can get the airlines to buy it. Even if they did, there’s no guarantee the seat would result in a more comfortable flying experience. But for airlines, it might be a more profitable one.

The idea originated with the design team’s disenchantment with long-haul economy class seats.

“Why is the client, who is paying hundreds of dollars for a seat, put in such an uncomfortable situation as today’s airline seats?” asks Daggett.

The answer, of course, is revenue. Squeezing more seats on a plane is more profitable since airlines can sell more tickets. But passengers suffer.

“I personally hate to fly,” says Daggett, who is 6′ tall and weighs 190 pounds. “Today’s 17- to 18-inch seat width doesn’t fit at all so I am forced to sit in an aisle seat and get hit with the carts, or in the window seat and sit slightly twisted to allow my fellow passengers their own seat space. When the person in front of me then reclines, I am locked into a very uncomfortable — no movement — position, which often results in cramps with possible blood clotting and a long recovery.”

The morphing seat uses viscoelastic materials to create a thin ergonomic “layered” sandwich to conform to your body shape. The pan seat tips forward up to 15 degrees and the sliding seat back tips about the same amount, effectively doubling the angle to 30 degrees. That allows passengers to stretch out, and the recline doesn’t affect the passenger behind or in front of you, according to the designers.

“This is the breakthrough change that all who fly have needed,” says Weaver. “It’s what we want, what we deserve when we travel. There’s no earthly reason why we can’t have it.”

Struggling to find a balance between comfort and profit

The morphing seat isn’t the only idea that proposes a dramatic change in economy class seating. Last year, London design firm Pearson Lloyd introduced a similar concept called the Eco Seat. It offers airlines a way to increase passenger density — that’s airline-speak for adding more seats to the cabin — while maintaining a degree of passenger comfort.

The Eco Seat is reportedly designed around a slender, carbon fiber composite shell and a spine that offers structural support and contains all the seat’s functional parts, like the audiovisual module and the tray. The design uses this curving spine to reduce the volume and material of the seat.

For airlines, the Eco Seat’s main selling point is that it is lighter and thinner, which would allow airlines to stack even more seats in economy class. And more passengers means more revenue. The Eco Seat even won a prestigious design award last month, making it the front-runner in the race to build a new economy class seat.

Is the airline seat of the future practical – and safe?

As a consumer advocate who specializes in travel cases, I want to believe this new seat can replace the old, uncomfortable seats. But simply wanting an airline seat to exist doesn’t make it happen (believe me, I know).

So I asked Weaver: Is this seat practical? And is it safe?

Practical? Maybe. It’s still a concept and hasn’t been built or tested yet. The design team is looking for someone to fund this seat, which would allow them to build several test seats.

“It will be very safe because the frame is a triangle solidly anchored to floor as is the pan seat adjustment,” he says. “It may change a bit from what is shown, but not in a way that affects patent claims to this seat. This innovative design is as safe as any current seats, if developed properly.”

What others say about the airline seat of the future

What do experts say about the morphing seat? At least one academic says the idea could fly.

“On the surface, it looks awesome, says Brent Bowen, a professor at the Embry-Riddle Aeronautical University in Prescott, Ariz. “This is a great innovation.”

Bowen says it’s about time the airline industry evolved its economy class seats. They pour resources into business- and first-class seats, while allowing passengers in the back of the plane to languish in outdated and uncomfortable seats.

However, if the morphing seat uses lighter material, that could possibly offset the higher cost of retrofitting the cabins and, over the long haul, save money by lowering fuel costs.

Weaver says the response from the airline industry has been predictable — which is to say, it hasn’t responded at all.

“So far, nothing,” says Weaver. “They just don’t call back or even respond in any way.”

Weaver says he knows why airlines are giving them the cold shoulder.

“We represent change,” he says. And that threatens established relationships between airlines and seat manufacturers, and potential changes that could extend far beyond a seat, affect the future of air travel.

What about airline passengers?

Every day, passengers complain about small airline seats. Incredibly, when asked why airlines decided to shrink the amount of space between seats, they say passengers asked for it by always choosing the least expensive seat. This kind of absurd, “blame-the-victim” rhetoric has helped make the airline industry one of the lowest-rated businesses in America when it comes to customer service. The only reason airlines can continue abusing their customers is that competition has been squeezed out of the industry by a series of uncompetitive mergers.

But passengers might not like what the airline industry does with a seat like this. It’s possible to move the seats even closer together with morphing seats. At the moment, the average “pitch” between seats — a rough measure of distance” is between 30 and 32 inches, down from 36 inches before airline deregulation.

What if airlines used the space they saved to add even more seats?

“They would not need to do this,” insists Weaver. “But they could very advantageously sell these seats according to pitch. That would be a godsend if they would do that. Then, over time, they could optimize the coach class of seat and the revenue from it, to their and their customers’ advantage.”

In other words, there’s no guarantee the airline seat of the future will result in more space for passengers.