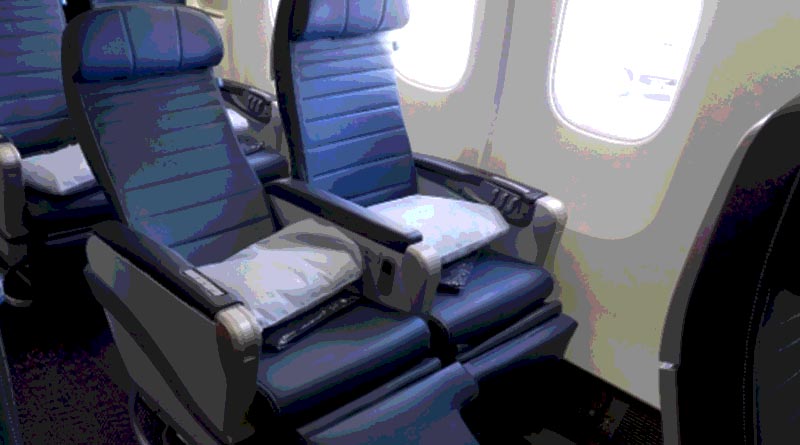 McNeill’s story is unfortunate but all too common. Inexperienced travelers often connect dots that they shouldn’t, leading to confusion and disappointment. The takeaway: Review your flight itinerary carefully and ask questions if you’re unsure. And as my old editor used to say, “Assume nothing.”

How could something like this happen? Well, as McNeill explains, she made the travel arrangements in 2017 through a travel agent, who was a friend of her spouse. The couple flew to Italy this June.

(Are the red flags flapping in the wind yet? Choosing a travel agent based on friendship, rather than professional qualifications, is a big no-no. You want to make sure you’re working with a pro. You can always make friends later.)

The tickets were supposed to be on Lufthansa in premium economy class, she says.

“The travel agent booked travel and charged airfare on Aug. 31, 2017,” she recalls. “But he didn’t book the original Itinerary we requested. Flights and travel were booked in economy seats and through a travel agency in Chicago.”

Worse, McNeill didn’t discover the problem until this spring, when she finally received a printed itinerary.

“The flights leaving Italy were on United, not Lufthansa,” she says. “We were routed through Newark, and we had to pay an additional $800 on the date of travel to upgrade to premium economy.”

Did her travel agent make a mistake?

Our advocate Dwayne Coward asked McNeill to share her paper trail — the correspondence between her and her travel agent. It showed that her original itinerary had been booked with United Airlines but operated by Lufthansa.

United and Lufthansa are partners on these routes, so it is possible to be booked with either airline and have the flight operated by the other.

Then United changed her schedule, routing her through Newark and flying her on a United aircraft. Again, that’s pretty routine.

As for the seating, a careful look at her original reservation doesn’t show a premium economy assignment. In other words, there’s no evidence that her travel agent or her airline had her flying up front. And that’s why she didn’t get premium economy seats.

A brief sidebar on why premium economy matters is in order. Airline seats are tiny. When you’re flying overseas and sitting for long periods you want at least a humane amount of personal space. The so-called “premium” economy seats offer about as much room as economy class seats did 20 years ago, give or take. But you have to pay extra for them — in McNeill’s case, $800 extra. Otherwise, no premium economy seats.

Yes, it’s shameless and greedy on the part of airlines. But for now, it’s legal.

Anyway, did her travel agent make a mistake? No, she did not. Was she a good communicator? No, she was not.

What mistakes led to the no premium economy seats problem?

McNeill wants refunds of $300 from United and $800 from her travel agent for upgrade fees she and her husband paid. She appealed to the airline (denied), to the BBB (I’ll let you guess what it said), and finally, after getting a round of “nos,” to our advocacy team.

Before I get to our answer, let’s talk about some of the mistakes and oversights that were made.

One of the issues is code-sharing, a complicated agreement between airlines that passengers don’t always grasp. Code-sharing is a marketing arrangement between two or more carriers. It allows one airline to place its designator code on a flight operated by another airline, and sell tickets for that flight. Here’s a full definition from the Department of Transportation.

In McNeill’s case, it allowed United to sell her a flight from Miami to Rome, even though it didn’t operate the flight. Lufthansa did. In any other industry, this would be unthinkable. I mean, imagine a Lamborghini with a Fiat engine. But in the airline industry, it’s accepted, even though many observers (including yours truly) believe it’s unethical.

If McNeill had taken a moment to brush up on code-sharing, she wouldn’t have been shocked by the schedule change. Her agent could have explained it to her, of course. But as I’ve already explained, she isn’t exactly the Great Communicator.

One other thing the agent could have done: helped her understand how schedule changes work. They’re fairly routine. They’re beyond her control, too.

The passenger also made mistakes. Lots of ’em.

By now, you’re probably adding up all the mistakes McNeill made. There are many. Instead of dwelling on them, I thought it would be helpful to offer some advice:

Always get a written itinerary after you make a reservation. A verbal confirmation doesn’t count.

Read the itinerary. Make sure it has the right city pairs, the correct seats, and the right days.

Don’t connect dots you shouldn’t. That applies to seats, meals, boarding privileges … pretty much anything.

“The fact that United charged almost $1,400 more than the total of $2,572 that it quoted is just mean,” she told us. “The fact [our agent] has been allowed to speak mistruths and mislead my husband is extremely disappointing.”

Dwayne and the rest of our advocacy team would have loved to help McNeill if she didn’t get premium economy seats, as promised. If we’d found even the smallest opening, we certainly would have tried. But we couldn’t find one. Both United and her agent played this by the book. It sure didn’t feel that way to her, and frankly, to me — but unless a voicemail turns up promising her premium economy seats, this case is going nowhere.

McNeill says she will never use a travel agent again.

“I will trust only myself, through direct contact with airlines, to make travel arrangements,” she says. I don’t blame her.

Christopher Elliott is the founder of Elliott Advocacy, a 501(c)(3) nonprofit organization that empowers consumers to solve their problems and helps those who can't. He's the author of numerous books on consumer advocacy and writes weekly columns for King Features Syndicate, USA Today, Forbes and the Washington Post. He also publishes Elliott Confidential, a critically acclaimed newsletter about customer service. If you have a consumer problem you can't solve, contact him directly through his advocacy website. You can also follow him on Twitter, Facebook, and LinkedIn, or sign up for his daily newsletter. Read more of Christopher's articles here.
79503