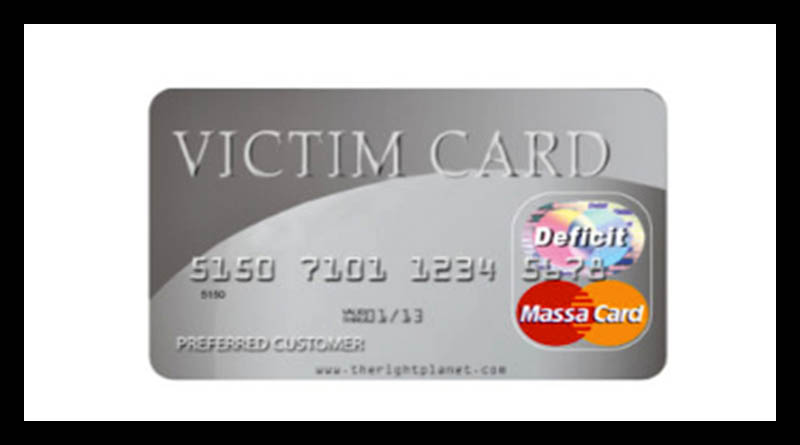 What color is your victim card?

I ask because everyone has one, whether they admit it or not. Sometimes they drop by this site and ask for help from my advocacy team, hoping to redeem some of their hard-earned points or invoke their “elite” victim status.

Does the victim card work?

Sometimes it works, but usually it doesn’t.

Increasingly, I’ve started to think of complaints as a kind of currency. It started off with the card deck analogy — also known as the Elliott deck of misfortune — but it’s evolved into something familiar to those of us who work in the travel industry.

Complaints are a lot like loyalty programs, come to think of it.

No, this isn’t what you expect. I’m not going to turn this post into yet another devastatingly effective critique of airline and hotel loyalty programs and those who promote and participate in them, although I certainly could.

Instead, I’d like to talk about the victim card and explain why you should almost never flash it or try to spend those frequent victim points you’ve collected. I’m here to tell you to let them expire unused.

It helps to understand how the victim card works. Everyone has a sob story to tell — a dead relative (hey, we all die eventually), a streak of bad luck or personal tragedy. Some of the folks who come to us for help know they have a platinum card, but they keep it to themselves. Others are barely silvers, but they act as if the world owes them something.

Here’s how I see it. And for this particular story, I’m going to stay away from specific examples, but I think we can all come up with one or two from the recent past, if not from our own personal experience.

A fair number of the cases are in this category. They’re people who don’t even know they qualify for a victim card. They have a problem with a business but they hope to resolve it based on facts and fairness. They can’t imagine invoking a personal problem in order to receive preferential treatment. These infrequents are pretty amazing, because they’ll refuse to play their cards even when they probably should. Companies should consider themselves fortunate to have them as customers.

The silver level: life or death

Silver-level complainers know their place at the bottom of the food chain and are usually reluctant to show the card or redeem their victim points. They typically only do it in the direst of emergencies: In the travel world, that would be the sudden death in the family, which forces them to buy a last-minute plane ticket, or a tragic terminal cancer diagnosis that makes them cancel a vacation. Silvers are good people, too, but their backs are against the wall. They need the money to pay hospital or funeral bills.

The gold level: making a case

Golds know that complaining can be profitable, and while they’re not overly eager to spend the currency of tragedy, they know that a compelling story can sometimes result in a refund or do-over. Normally, their emails start with, “I’m not the type to complain …” which of course means, they are the type to complain and their emails are long and contain lots of adjectives. The golds are often rewarded with what they want. Think squeaky wheel.

Platinums are absolute pros at complaining — at least they like to think of themselves as that. They string together a series of small misfortunes and send it directly to the CEO (with a copy to me) knowing that they’ll probably get a quick resolution to an inconsequential complaint. For the platinum cardholders, professional victimhood has its perks, and they feel entitled to them. They’re likely to say they missed a day of work because they had to wait for an appliance repair, and that they expect to be fully compensated for it. They may even demand a brand-new appliance to make up for the trouble. (Hey, I’ve seen it all.)

Don’t even get me started on the super-elites, whose level of victimhood isn’t even officially recognized as a level. They turn every molehill into a mountain and are the reason for so many restrictive corporate policies today on everything from refunds to warranties. These entitled elites give the true victims a bad name, and what makes it worse is that they don’t care.

Everyone has a victim card of some sort

Everyone’s a victim of something. Everyone has victim points to spend. But it’s how you spend them that matters.

The longer I listen to consumers complain, the more I’m convinced that playing the victim card is almost always a terrible idea. The representatives listening to you have heard it all, and they’ve developed a special ability to sort the expert complainers from those who are profoundly uncomfortable with disclosing the details of their personal tragedy.

Instead of pulling together a laundry list when something goes wrong, it’s better to just think of your victim card as expired. Permanently. In virtually every instance, your complaint will go further if you stick to the facts than if you’d wave the card in front of an employee.

If your card has expired, do what you’d do with your frequent flier miles. Let it go. The card, like the miles, wasn’t worth anything to begin with.