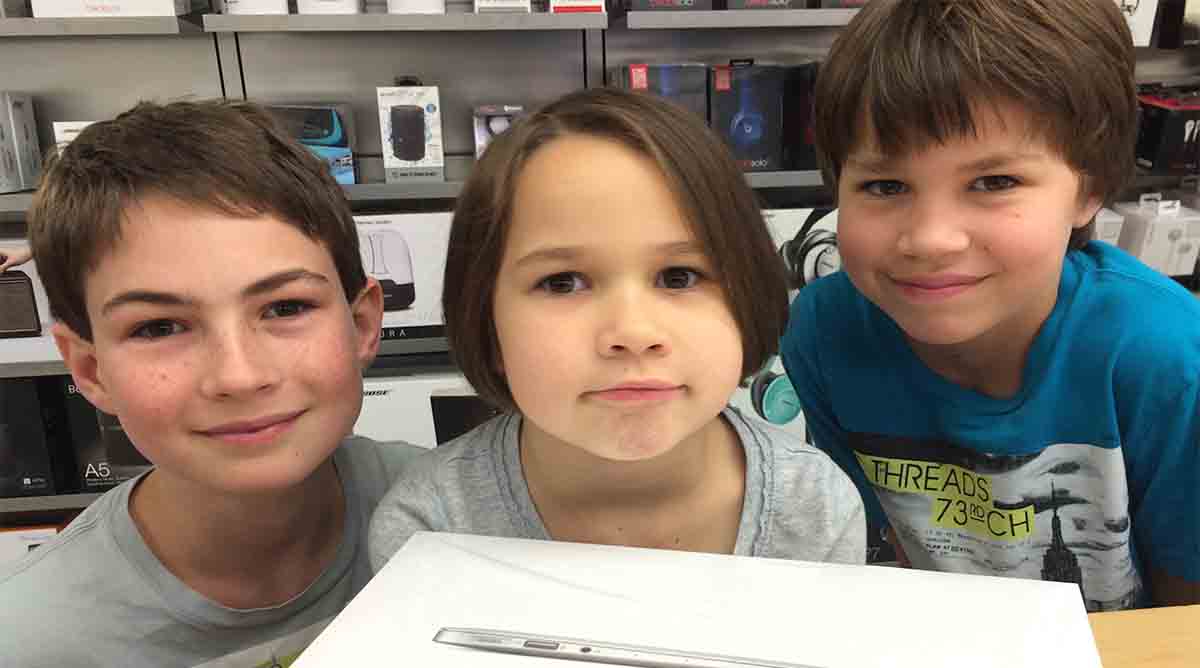 It was supposed to be a special day for my kids.

They couldn’t contain their excitement when we told them we were headed to the Apple Store to pick up three brand-new MacBook Air computers for school. Kari and I had been saving our pennies to replace their aging laptops, and truth be told, we were as thrilled as the children.

But the day ended in disaster. And, according to the police, it could have cost us a lot more than the thousands of dollars we lost in a few short minutes.

I’m sharing our story with you because, with the holiday shopping season just around the corner, I don’t want this to happen to you.

Yes, it’s embarrassing. I’ll admit from the outset that we could have taken steps to prevent it. But you also deserve to be warned.

It all started on a Sunday afternoon in September, when we headed to the Apple store at the Altamonte Mall in Altamonte Springs, Fla. Every Apple device I’ve purchased in the last decade has come from this store.

Our timing was not ideal. The store was overrun with customers who were waiting in long lines for the new iPhone 6. Lucky for us, there was a separate queue for computer buyers, and an associate helped us quickly. After setting up our preferences, we were on our way — each child happily carrying a new computer out of the mall in a conspicuous “Apple” bag.

From there, we drove to the grocery store to pick up dinner. We were in the store less than 15 minutes. When we returned, someone had pried open the drivers-side door of our 2005 Honda Accord. The trunk was empty.

The MacBooks had vanished into thin air.

“What happened?” our seven-year-old daughter asked me, her eyes welling up with tears.

I explained to her and her brothers that their school computers, which we’d saved for and waited patiently to buy, had been stolen.

After reporting the crime to the sheriff, we retraced our steps at the Altamonte Mall. We interviewed mall security, an Apple Store manager, and the employees who had helped us buy our computers.

Apparently, a team of career criminals had staked out the Apple Store that Sunday. A spotter was either near the store or in it, tagging potential victims. He or she then phoned or texted an accomplice with a description, who followed us to the grocery store by car.

Once we were inside the grocery store, the thief used locksmith’s tools to gain access to the car.

You’re probably wondering if insurance covered the loss. We have an annual travel insurance policy, but the crime must occur more than 100 miles from your home. My Visa card doesn’t cover items stolen from vehicles. Neither does my car insurance. My homeowners policy covers the computers, but I had to pay a $1,000 deductible.

We enabled tracking on the devices, so that if they’re turned on we’ll know their location and can report it to law enforcement officials. Apple has the serial numbers, so if the devices turn up, they would theoretically be able to bring the criminals to justice.

But here’s the kicker: A deputy told us this could have ended much, much worse.

See, the felons followed us for 20 minutes, and if we didn’t need groceries, guess where we would have gone? Yep, we were headed home.

When they know where you live, they can do one of two things. They can wait until you leave, and then ransack the house. Or they can confront you in the driveway and demand you hand over the computers. That’s what happened to some Houston-area Apple customers back in 2011.

What if the criminals had followed us back to Winter Springs? Then we might be dealing with more than lost property. One of us could be in the hospital — or worse.

The story had an anticlimactic, but noteworthy, ending. The computers were not recovered and we filed a claim against our homeowner’s insurance policy. The MacBook Airs will probably turn up on eBay.

Was any of this avoidable? Absolutely. We could have been more discreet with our purchases. But it’s hard to tell the kids to not be excited about their new computers.

The mall and the Apple Store might have done a better job, too. The surveillance inside and outside the store wasn’t enough to catch the bad guys on camera. And how about training employees to spot and report this kind of scheme? It’s hard to believe we’re the first victims, or that we’ll be the last.

Will we ever buy another computer from an Apple retail store again? If we do, we’ll be watching our backs to make sure no one follows us.

It sounds paranoid, but it isn’t.

So to those of you heading to the mall before Black Friday, please don’t become victims of this crime. Go window shopping and buy online. If you make a purchase, carry it out of the store discreetly, in a generic bag.