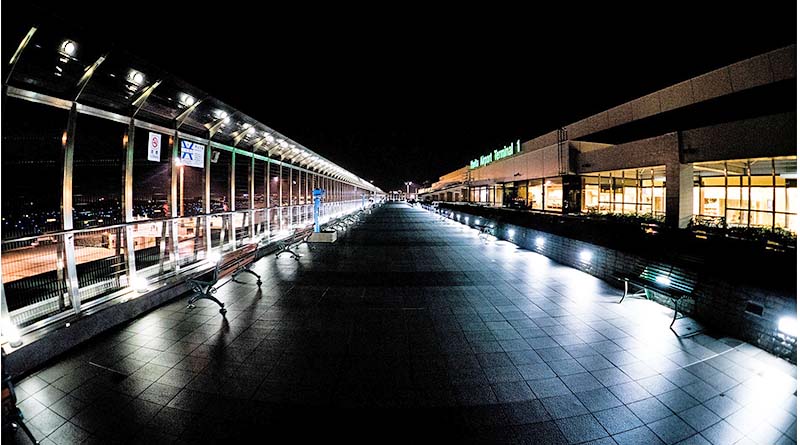 Sarah McKeown was supposed to fly from Baltimore to Okinawa, Japan, after Christmas, a trip made possible by her mother’s Chase rewards points. But after receiving the tickets, McKeown realized that Chase expected her to do the impossible to make the flight: to get across Tokyo in just 3 ½ hours during rush hour.

That’s right, mom had booked the wrong airport for her daughter — a potentially costly mistake. Her case underscores the importance of double-checking your itinerary when you’re DIYing your travel reservations. It’s also a reminder that assumptions can quickly derail your trip when you are your own travel agent.

How she booked the wrong airport for her daughter

But first, let’s hear from Debra McKeown, the mom who inadvertently handed her daughter a ticket she probably couldn’t use.

As she explains it, her 22-year-old daughter planned to travel alone just after Christmas to visit her boyfriend, who is serving in the military in Okinawa. She’d booked her daughter’s tickets online with her Chase rewards points. A few weeks before her arrival, the boyfriend took a closer look at her itinerary.

“He alerted us that her connection in Tokyo is in two different airports, with only 3 1/2 hours to deplane, get her luggage and go through immigration, find the train or airport shuttle and purchase the ticket, travel 90 minutes across Tokyo to Haneda Airport, recheck her bag, and go through security,” she says.

Her flight arrives at 4:30 p.m. Let’s see how that looks on the train schedule.

Assuming half an hour to 45 minutes for customs, here are McKeown’s mass transit options.

Of course, Tokyo is one of the most congested cities in the world, so it could take longer.

Yeah, 3 ½ hours is cutting it close. Too close. This kind of itinerary should carry an enormous warning label. Actually, it shouldn’t be allowed at all.

Trying to solve the wrong airport case by herself

McKeown called Chase Travel to try to fix the itinerary.

“I asked what would happen if she misses her impossible connection in Haneda, and was told she’ll be considered a no-show and the return ticket will be canceled, making it necessary to purchase a new, one-way ticket for her return at a late date price,” she says. “This is impossible for us and completely unfair.”

She explained that the Chase site did not show that a cross-city transfer would be needed for this itinerary. When she compared it to ANA’s site for the same itinerary, there was a major difference.

“It is both highlighted and states, ‘self-arranged transfer between airports required’,” she says.

ANA was willing to make the change for another $3,000. Chase asked the airline to waive the fare difference, but it refused. At that point, McKeown felt she had no choice but to buy another ticket.

Who’s responsible for booking a ticket at the wrong airport?

Should Chase have more clearly disclosed the airport transfer? Of course. Should ANA have stepped up and helped a 22-year-old flying halfway around the world? Sure. But whose responsibility was this mess?

People, if you are booking your own airline tickets, you have to check the itinerary v-e-r-y c-a-r-e-f-u-l-l-y. It is your responsibility, and yours alone, to ensure you are flying where you think you’re flying. There are no excuses (pick any from my famous deck of misfortune). Barely legal daughter flying solo. Boyfriend serving in the military. It matters not to the airline.

Don’t forget, you have 24 hours to cancel a reservation. All the more reason to check your itinerary as soon as you get it — not months later.

I tried duplicating the ANA itinerary on Expedia, the booking engine Chase uses, but couldn’t find any flight with a “you’re-on-your-own” switch in Tokyo. It’s unclear what kind of warning, if any, was given to McKeown before she finished her daughter’s reservation.

You can always contact one of the Chase executives listed on our site.

How we fixed this wrong-airport case

Our advocate Dwayne Coward reviewed the paper trail between McKeown and Chase. From the information we had, it appeared there was little or no warning that her daughter would have to make a mad dash across town to catch her flight to Okinawa. That’s not to say she wasn’t responsible, but still — it warranted a second look by our Chase contacts.

A few days later, we heard back from McKeown:

After the many calls and hours I have spent on the phone with Chase Travel, I was stunned that they called me this evening to apologize for the inconvenience I have been through and offer me $600 credit back on our credit card or award points.

I took the cash.

I also have the credit with All Nippon (at least that’s what I’ve been told) so I am pleased and, of course, very grateful that you advocated on my behalf. It’s unfortunate that I already laid out more money for another ticket for my daughter to travel to Okinawa, but since it was getting closer to the departure date, I felt it was the thing we had to do.

I don’t regret it one bit because I can enjoy the holidays and not be nervous that my daughter will miss the trans-Tokyo connection, be stuck overnight and have the remainder of her itinerary canceled.

Our team is happy, too. I can only imagine a 22-year-old American woman wandering the streets of Tokyo alone. A sequel to Lost in Translation no one wants. And I’m sure neither McKeown nor her daughter will ever push the “buy” button again before reading the itinerary twice.