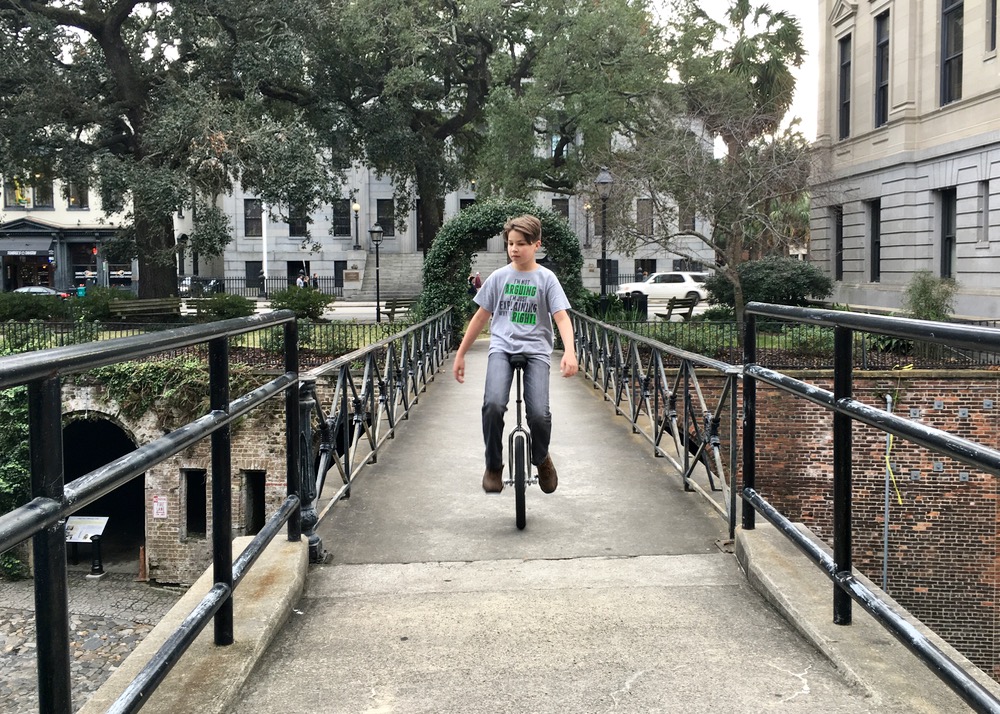 The circus hasn’t come to Savannah, but it sort of looks like it.

That kid you saw dodging tourists and on a unicycle recently in Georgia’s oldest city was my 12-year-old son, Iden. The guy chasing after him — well, that was me.

I kept thinking: Either he’s going to end up in the hospital or an innocent bystander is. Can’t figure out which is worse.

Savannah is a cycling city, but it’s not a unicycling city. With good reason: The sidewalks are often narrow and the pavement is uneven. That’s an historical destination for you. Maintaining your balance on a unicycle is challenging, but add chipped cobblestone to the mix, and you’re just asking for trouble. Then, line the streets with visitors, which is bound to happen during the holidays, and it’s not a question of if there’s going to be a collision, but when.

Unicycles are not unheard of in Savannah. The circus first came through here in 1801. There’s a family of unicyclists that’s known to ride through town — mom, dad, kids — but they were nowhere to be seen on our visit. If you’ve ever tried to ride a unicycle, then those parents will either have your respect or your pity, and maybe both.

How did my son pick up this balancing skill? Blame it on an Internet meme called Dat Boi, a unicycling frog. It’s probably best to leave it at that. Anyway, for Halloween, he wanted to dress up as Dat Boi, the unicycling frog, and in order to do that, he had to learn how to ride a unicycle. It took him the better part of a month to pull it off. And then there was the frog costume. Let’s not go there today.

We found a vacation rental right on Forsyth Park through Vacasa. It had a nice storage space on the lower level for Iden’s velocipede. Most important, it was only steps away from the park. Wiseguy that he is, Iden pointed out the signs that said “No Bicycling” as he rolled through the park.

So he boldly cycled around Forsyth Park Fountain, with the sightseers and wedding photographers giving him the eye.

Actually, following a unicyclist through a city like Savannah is like bringing a puppy to the mall. You’ll turn heads. People start to smile when they see you. Kids ogle: “Look, Mommy, a unicycle!” Dads tell their sons, “Look, the circus is in town!” Even members of Savannah’s transient population, who take up residence in the squares on a warm December day, feel compelled to smile when they see a unicyclist approaching.

What a great icebreaker. Or maybe, just a great way to break your arm.

A unicycle, or any oddity like a pogo stick, may offer a glimpse of a destination that few visitors ever see. People will warm to you in ways that they wouldn’t if you were on foot. Kind of hard to explain, but everywhere we went, we found the Southern hospitality amped up. We stopped in at our favorite coffee shop, the Foxy Loxy Cafe, and as we enjoyed a chai latte and zucchini bread, both of which I highly recommend.

The other patrons, most of them locals who had wandered over from the public library, seemed to have never seen a unicycle in person, let alone a kid who could ride it as well as Iden. I wouldn’t say that we’re ready to write a sequel to Midnight in the Garden of Good and Evil based on the people we met, but we met a lot of people thanks to Iden’s wheel.

Eventually, you’ll end up at Savannah’s riverfront, which isn’t the best place for unicycling because it’s packed with tourists. But it’s worth pointing out that our must-visit place in Savannah is located here. It’s a little store called The Peanut Shop where most of their flavored nuts are available for “sampling.” The heaviest damage was done by my 14-year-old, better known as the Son Who Does Not Stop Eating. He sampled every variety. Multiple times.

Let me take this opportunity to apologize to the good owners of The Peanut Shop. I promise we will return and buy more nuts the next time we’re in town. Also, we’ll leave the unicycle at home.

For the record, I don’t recommend riding a unicycle along East River Street, the main thoroughfare. You will eventually hit someone.

Remarkably, Iden only bumped into one person, a stroller-pushing dad. Iden’s dad was worst-case-scenarioing the whole thing as it happened, imagining bodies lying face-down in a deep pool of blood. But he didn’t need to worry. Oh, why am I writing about myself in the third person? I didn’t have to worry. It was more of a graze than an actual bump. My son apologized and all was well.

My nerves can’t take much more of this. Kids, if you go to Savannah, leave your unicycle at home. Because I said so, that’s why.