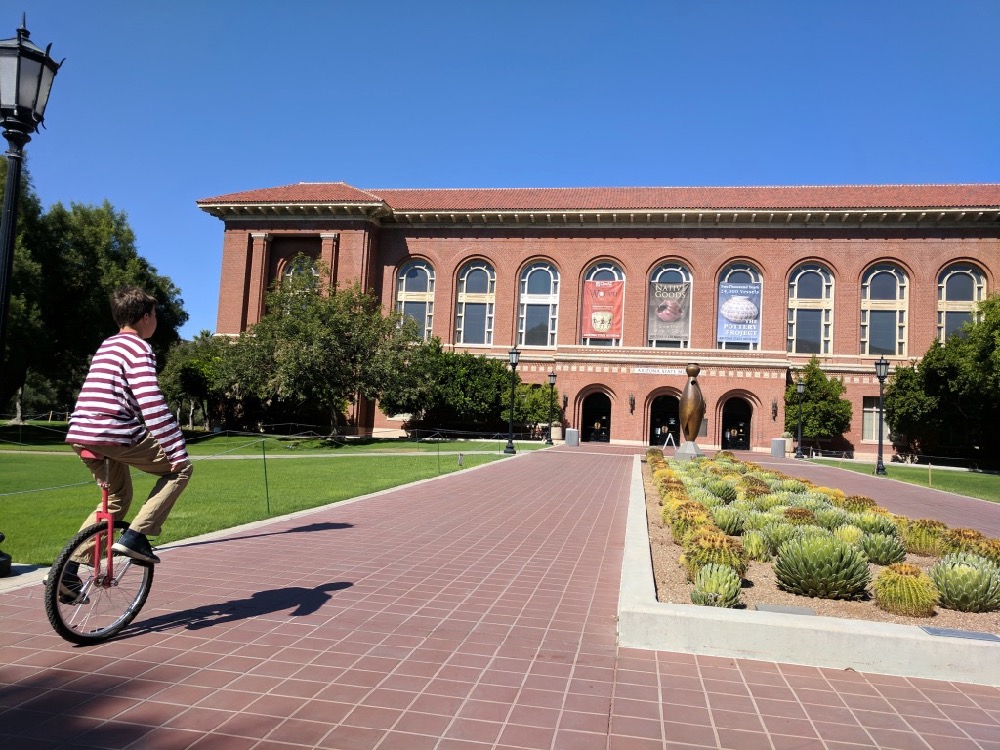 In Arizona’s Sonoran desert, things aren’t always what they seem.

Like those pigs scurrying around the Arizona-Sonora Desert Museum, a botanical garden a few miles outside of Tucson.

She’s right, of course. (She always is.) A javelina, sometimes also called a skunk pig, is a hoofed mammal that roams the desert. The babies are cute but the adults are aggressive and smell bad.

In other words, you want to steer clear of them.

The desert around Tucson is filled with things that appear to be something they are not, as we discovered on our recent adventure in Southeastern Arizona. Maybe my kids had something to do with these mirages.

OK, I’m sure they did. One of the best parts of our recent week-long adventure in Tucson, visiting the University of Arizona campus, allowed my 12-year-old to take his unicycle for a spin.

“Where’s the other half of your bike?” the students shouted, waving at him.

By the way, the university is an incredible place for cycling. It’s flat and offers broad sidewalks and long straightaways and, of course, an adoring audience for my preteen. My older son, age 15, had other things on his mind, like, “How do I get into here?”

But let’s get back to those javelinas for a minute. If you’re out here, you have to check out the Arizona-Sonora museum. Not only does it feature exhibits with real javelinas, but you can see actual Arizona wildcats (not the university mascot), deadly spiders, and learn about this fascinating desert. While there are no actual mirages, like in those westerns, you’ll see plenty of remarkable things. The Sonoran desert looks barren and lifeless at first glance, but the museum helps you take a closer look to see this vibrant ecosystem. The Pima Air & Space Museum, located just a short drive from the airport, is another case of what-you-see-isn’t-necessarily-what-you-get in Tucson. The Pima doesn’t look like much from outside — it’s several nondescript hangars — but again, looks can be deceiving. Inside, we discovered one of the most impressive aviation museums we’ve ever seen, and, as aviation geeks, we’ve seen a lot of them.

There are a total of five indoor exhibit hangars, including two dedicated exclusively to WWII. And behind them, we found rows upon rows of aircraft from every era, including a Boeing 787 Dreamliner. To give you an idea of the Pima’s vastness, it offers a tram tour. If you decide to walk, go in the early morning or late afternoon to avoid the heat of the day, which can be brutal. Our biggest surprise discovery, though, came on the last day of our trip, when we decided to take a stroll through the downtown area on a Saturday afternoon. In the older part of town, we stumbled upon a cafe that served delicious coffee cake, located inside what appeared to be a historically significant building. That cafe turned out to be Café a la C’Art, an award-winning restaurant housed in the Tucson Museum of Art. We were curious.

“How much is the museum admission?” I asked our barista.

And just like that, we were touring a newly-refurbished art museum, including an exhibit on desert apparel, folk art and art from the Spanish era. More importantly, we were walking among Tucson’s art patrons, who were grateful to have their museum back after a two-month hiatus. It was inspiring to see so many people come out to support the arts in Tucson, a place where you might be forgiven for thinking that culture is an afterthought.

And that’s the beauty of Tucson. Everything is not in plain sight to be discovered, but pay close attention and it will reveal itself to you like a desert sunflower in spring.

Where to stay. Check out the Staybridge Suites Tucson Airport, which is close to the Pima Air & Space Museum. The hotel is perfect for families and includes breakfast and, most importantly, laundry facilities. For a more high-end experience, try the Hacienda Del Sol Guest Ranch, an historic property with large rooms and a terrific spa and pool. Fun tip: Try the horseback riding in the dry river bed below the resort for a real close-up view of the desert.

Where to eat. If you can ditch the kids for a meal, head over the The Grill at Hacienda Del Sol for dinner, named one of the most romantic places for dinner in Tucson. We also enjoyed the takeout at Baja Cafe and the kids adored the mac and cheese at The Fix right across from the university. It is, I have to admit, the perfect meal during midterms.

Christopher Elliott is the founder of Elliott Advocacy, a 501(c)(3) nonprofit organization that empowers consumers to solve their problems and helps those who can't. He's the author of numerous books on consumer advocacy and writes weekly columns for King Features Syndicate, USA Today, Forbes and the Washington Post. He also publishes Elliott Confidential, a critically acclaimed newsletter about customer service. If you have a consumer problem you can't solve, contact him directly through his advocacy website. You can also follow him on Twitter, Facebook, and LinkedIn, or sign up for his daily newsletter. Read more of Christopher's articles here.
62416