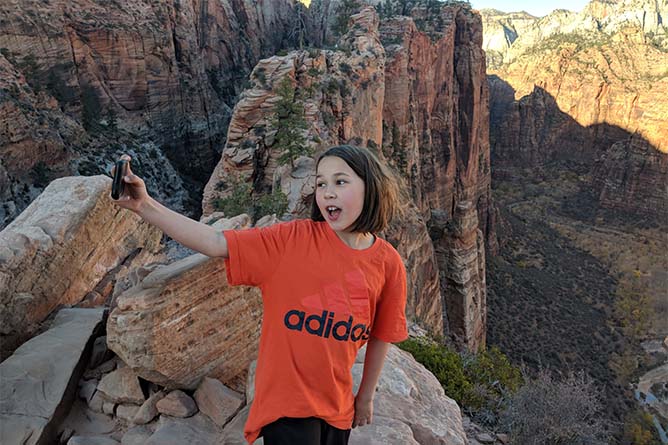 Kids do the darndest things on vacation. Their antics include dangling off cliffs in Utah, immersing themselves to the icy waves of the Gulf of Alaska, and braving some of the world’s most hazardous roads in Africa. I know because that’s what my children have done — and it scared the living daylights out of me.

Vacations are dangerous to begin with. If you don’t believe me, check out the State Department Travel Advisories. Or just browse the headlines for the latest “tourist killed” story. I don’t want to become another headline, so I tell my kids: Be safe. And of course, they don’t listen to me.

So today, instead of telling you what I’ve learned from the experience — or what you can learn — I’m just going to show you the pictures. After you see them, I think you’ll agree that when it comes to traveling with kids, the only thing you can do is give them a stern talkin’ to and hope for the best.

Don’t go off the cliff, kids!

“Stay away from the edge, kids,” I warned when we pulled into the parking lot at Canyonlands National Park in Utah, the less famous cousin to Arches National Park. Maybe they didn’t hear me. A minute later, my two youngest kids had already found the void and had taken a comfortable seat in front of it.

“Step. Away. Slowly.” I ordered. My daughter shook her head.

“Take a picture, Daddy,” she countered.

“If I take a picture, will you step away slowly?”

So that’s how that picture came to be. Oh, and you’re probably wondering about the one at the top of this story, taken at Angel’s Landing in Zion National Park. It’s probably the most dangerous hike in the National Park System.

I can explain. They ran ahead of me on the trail and by the time I caught up … well, that’s what I saw. Erysse taking a selfie.

How dangerous are these stunts? A 13-year-old died while climbing Angel’s Landing last year. In Canyonlands, she had a better chance of dying of exposure.

I never thought that taking a boat ride in Alaska’s Resurrection Bay would be dangerous. And for the record, it isn’t. Unless one of your kids decides it’s clothing optional day and strips down to a T-shirt in 50-some degree weather. But that’s exactly what my son Iden did on a recent trip to Alaska.

With the wind whipping around, it must have felt like it was freezing on the deck of the Callisto Voyager.

“Where’s your jacket?” I demanded.

For those of you without teenagers, that is actually an order. We phrase them as questions to make them more palatable to youngsters. Doesn’t work.

“I’m fine! I’m better than fine!” he claimed, doing his best “I’m-the-king-of-the-world” impression while standing on the bow.

“You are not. You are going to catch pneumonia. Put something on.”

“Take my picture,” he said. I did, and with a little prodding, he finally put on a sweatshirt just as an icy wave splashed over the deck.

Iden did, in fact, catch pneumonia a few months later. He took the antibiotics and laughed it off. Kids!

Taking your life into your own hands by driving in Africa

The most dangerous thing we’ve done as a family is driving in Kenya. By “driving” I mean we were in a tour bus or in a jeep. I counted the close calls, which came at predictable intervals. A motorcyclist swerved into our lane. Another bus came within inches of colliding with us. We almost plowed into a pedestrian. Seriously, the driving experience in Kenya is like a theme park thrill ride.

But it’s real. According to the World Health Organization (WHO), between 3000 and 13,000 Kenyans lose their lives in road traffic crashes every year. Most of the victims are vulnerable road users – pedestrians, motorcyclists, and bicyclists. Nearly one-third of deaths are among passengers, many of whom are killed in unsafe forms of public transportation.

There are no helmet laws in Kenya, according to WHO. Blood alcohol concentration levels for drivers or child restraints do exist, but they are poorly enforced. If you drive in Kenya, you’re taking your life in your own hands. Or someone else’s.

There are no profound lessons from my slideshow of near-death experiences. I am grateful to the travel gods that we survived to tell the tale of climbing cliffs, getting sprayed by icy waves, and narrowly avoiding collisions.