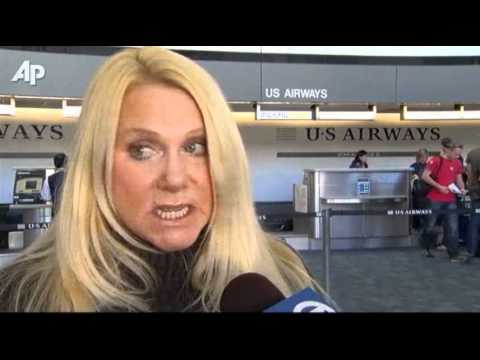 Teri Weissinger’s tale of being stuck at San Francisco Airport for eight days drew a swift and predictable reaction from readers.

“Can you do anything for this poor woman?” asks Judith Hill.

Let me fill in a few details, for those of you who missed the story. Weissinger, a self-employed furniture broker, was flying from San Francisco to Idaho when US Airways asked her to pay $60 for her checked bags. She says she didn’t know about the fees.

Since she was between jobs, didn’t have the money to cover the baggage fees. Weissinger couldn’t abandon her suitcases, and so she spent eight days sleeping at the airport until the nearby Airport Church of Christ gave her the $210 to cover the applicable extras.

And you can only imagine the reaction from the media, ranging from Gawker to Good Morning America. There was outrage. US Airways was charged with concealing its surcharges.

Talking heads and consumer advocates cluck-clucked that this is what you get when airlines are allowed to lie about the true cost of a ticket.

I’ve been critical of how air carriers disclose their fees for years, and as the member advocate for the nonprofit Consumer Travel Alliance, have pushed for new rules that would require airlines to disclose fees before the booking is made. Those regulations go into effect in January, thankfully.

But back to Weissinger. I thought I would give her a call to check on the status of her complaint. I received her number through Al Anolik, a San Francisco attorney who specializes in travel issues. Anolik had contacted me after the first report on Weissinger, saying he and Weissinger had been in touch.

“It sounds ditzy,” she told me, when I asked her why she didn’t know about US Airways luggage fee. “I guess it is ditzy. But I haven’t flown in five years, and that’s what happened.”

Weissinger was in a Bay Area suburb when I spoke with her, which confused me. Wasn’t she, as the various reports had suggested, now in Idaho?

No. As it turns out, the incident took place back in April. She was flying to Idaho for a seasonal job, but was now in California. That explains how the TV networks were able to tape her at San Francisco airport.

After arriving in Idaho, she was determined to get compensation from US Airways for her luggage ordeal. When she returned to California, she found Anolik online. After consulting with him, they decided to take her case to the media.

I wondered if US Airways had been in contact with her.

Yes, she said. Just before the first story aired, an airline representative phoned her to try and persuade her to pull the piece. She declined. After the report aired, US Airways offered to refund $60 in luggage fees.

What would be enough?

“You’ll have to talk with my lawyer about that,” said Weissinger.

I asked her if she was planning to sue US Airways. Again, she deferred to her attorney.

OK, one last question: “Have you had any contact with the Airport Church of Christ, which helped you in April?” I asked.

“No,” she said. “It’s been such a busy time since this story broke. I suppose I should.”

I’m deeply ambivalent about Weissinger’s case. No doubt, she suffered as a result of US Airways’ intransigent policies. I sympathize with her. But her story isn’t the smoking gun for luggage fees that airline critics are making this out to be, either. If it were, then her case would have been filed somewhere other than with the court of public opinion.

Weissinger’s problem reminds me of another woman who, enabled by a fawning mainstream media, parlayed a negative airline experience into a cause that set the consumer advocacy movement back by decades. We can’t afford a repeat of that.

I hope Weissinger and US Airways can work something out. But I also hope her story isn’t used to vilify an entire industry.

It’s doing a fine job of that on its own, thanks very much.