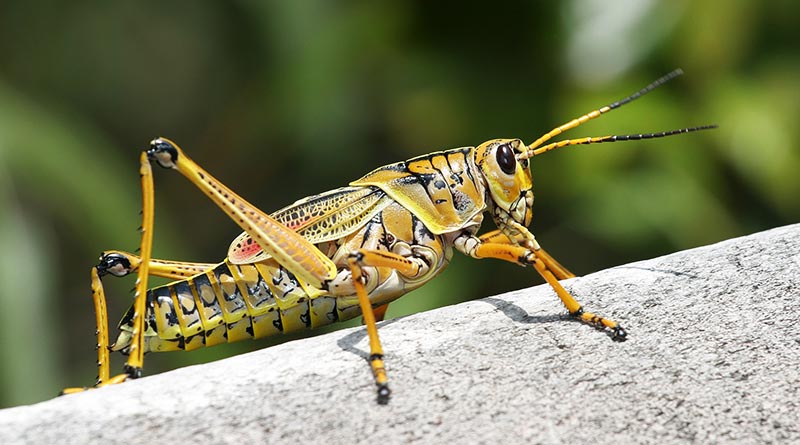 It’s a timely question. Swarms of grasshoppers have descended on Sin City this summer. We’re talking tens of millions of pallid-winged grasshoppers, like something straight out of an alien movie. The clouds of insects are so enormous that they show up on weather radar.

Surely, travel insurance would cover a trimerotropis pallidipennis outbreak? But a careful dissection of this little insect problem reveals the limits of insurance. It’s also a necessary reminder that the bigger winged creatures — the planes that fly you to Las Vegas — don’t care about bugs.

What’s happening in Vegas with the grasshoppers?

The insect problem is not small. People in Las Vegas are calling it the “Great Grasshopper Invasion of 2019.” A wet spring created the ideal conditions for a massive insect migration.

These herbivores love ultraviolet light. So you can find lots of videos of them swarming around the highrise hotels, particularly the glowing bulbs of white light. Their favorite: The Sky Beam, which shoots out from the top of the Luxor Resort and Casino.

The good news? The grasshoppers don’t carry disease, they don’t bite, and probably won’t cause any damage, say experts.

OK, I know what you’re thinking. Sounds like a wild weekend in Las Vegas. But for insect-phobic guests, the bugs are a serious problem. Chances are, Petersen isn’t the only one wondering: Is the Las Vegas grasshopper problem covered by my insurance?

She didn’t want her Janet Jackson concert ruined by insects

Peterson had tickets to fly from Minneapolis to Las Vegas and concert tickets to see Janet Jackson at the Park Theater at Park MGM last month. She paid $486 for the tickets and then splurged for a seat upgrade on her Sun Country flight, which set her back another $303.

“After I learned about this problem, I found dozens of articles written online about the enormity of this problem accompanied by dozens of pictures and videos,” she says. “Experts predicted in these articles that the infestation would most likely last for weeks.”

She imagined her special Vegas weekend with these uninvited guests.

“All I could think about after reading these articles, seeing these pictures and seeing these videos was how horrific it would be to have swarms of grasshoppers flying around us, jumping on us, and to have to step on them and kill them every time we went outside,” she says.

Sound a little over the top? A few years ago, I might have agreed. Except that my 12-year-old-daughter is terribly orthopterophobic. That’s the technical term for fear of grasshoppers, crickets and locusts. She will run into a busy street to avoid one. And the grasshoppers aren’t just in Nevada. They’re as far east as western Colorado, where we live. Needless to say, she prefers to stay indoors.

She thought she was covered by insurance

Peterson canceled her trip, accepting her airline’s ticket credit. Then she filed a claim with Allianz Travel Insurance. She wasn’t sure if insurance covered her Las Vegas grasshopper, but she was hopeful.

And she thought she’d exterminated her problem. But then she heard back from Allianz.

So is the Las Vegas grasshopper problem covered by my insurance — or not?

Here’s how Allianz responded to her claim:

We have completed our review of your claim, and unfortunately are unable to provide benefits under the coverage you purchased because:

Your insurance program provided event cancellation benefits for very specific reasons. They are preceded in the insuring agreement by the indication that we cover certain expenses which result from the cancellation of your plans if the loss is caused by one of those reasons. If a submitted loss does not fall within those parameters, there is no coverage under the contract.

Unfortunately, no longer wanting to attend the event due to fear of the grasshopper invasion in Las Vegas is not included among those reasons for which coverage is provided.

Based on the claim documents you submitted, we regret that we are unable to honor your claim.

Please refer to your copy of the Certificate of Insurance/Policy and Letter of Confirmation for more information on the specifics of the policy that you purchased.

So there’s the answer to the question: Is the Las Vegas grasshopper problem covered by my insurance? It isn’t.

Indeed, a look at Peterson’s insurance policy shows that it’s a “named perils” variety. Allianz is saying that her policy would have to specifically cover a grasshopper invasion for her claim to be successful.

I’ve never seen an insect infestation as a covered reason.

If she’d purchased a “cancel for any reason” policy, however, she could have filed a claim. Those policies don’t even require a reason for a cancellation. But she would only get a percentage of her ticket purchase refunded.

Could she appeal this decision to deny her Las Vegas grasshopper claim?

Peterson could have appealed her denial to one of the Allianz customer service executives listed on our site. But in this case, I wouldn’t have recommended it. The insurance company would have just sent her another rejection letter.

What about those Sun Country upgrades? There’s no mention of whether upgrade fees are — or aren’t — refundable on the Sun Country refunds page. A brief, polite email to Sun Country’s execs might get the upgrade transferred to the next Las Vegas vacation. (Travel tip: try rescheduling for January, when the grasshoppers are long gone.)

But to her second question about refunding the upgrades — no. It seems Sun Country plans to keep her upgrade fee.

How to protect your next trip against a grasshopper invasion

Grasshopper infestations happen. This one just happened to coincide with Petersen’s weekend in Las Vegas.

You don’t want to be the next person to ask: Is the Las Vegas grasshopper problem covered by my insurance? So here’s how to avoid problems like hers:

Unfortunately, the grasshoppers foiled Petersen’s Las Vegas vacation. But they don’t have to destroy yours.

How can I make Avis refund this surprise $4,228 car rental charge?

Why did this Vrbo host ruin her birthday party?

How can you get a full refund from Trainline? Not like this