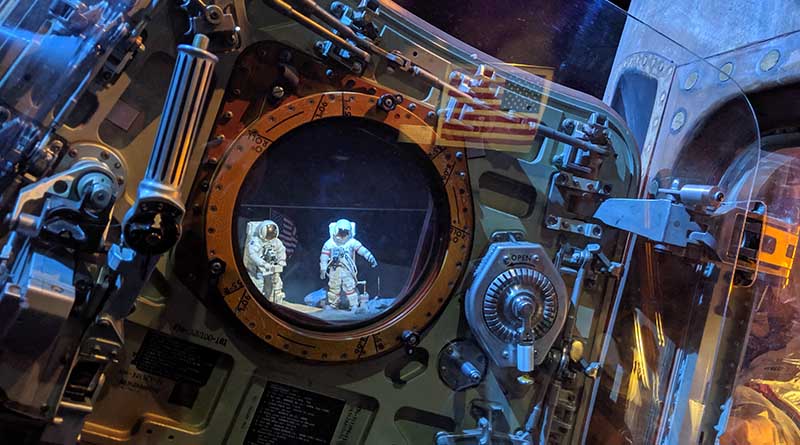 Houston with kids, in the middle of the summer. If those aren’t the perfect ingredients for a family adventure, then I don’t know what are.

A lot of Houstonians flee to the mountains during the hottest months, seeking relief from the 90-degree temperatures and oppressive humidity in Colorado or New Mexico.

We went the other way. My kids had a big school project that required their presence for a few weeks.

Turns out there’s a lot to keep the whole gang entertained in H-Town — and then some.

While many of these attractions don’t cost anything or have “free” days, I leaned one secret for cutting our entertainment costs. Houston’s CityPASS ($59 for adults and $49 for children ages 3 to 11) can offer savings of up to 47% on major attractions such as the Downtown Aquarium, Houston Zoo, or Space Center Houston.

We happened to be in Houston during the 50th anniversary of the moon landing. Johnson Space Center hosted a series of events, including an outdoor concert and festival, Apollo 11-themed pop-up science labs, mission briefings, and a special NASA tram tour featuring a just-reopened historic mission control.

My kids have probably been to too many museums. But Space Center Houston, the official visitors center for NASA Johnson Space Center, is no ordinary museum. You can walk through a retrofitted Boeing 747 that carried the Space Shuttle, or touch a real moon rock. That kind of show-don’t-tell philosophy is pretty engaging — even for the most jaded teenager. That kept the eye-rolls and “Dad, I’m hungry!” comments to a minimum.

Be sure to set aside time for a Level 9 Tour, which takes you behind the scenes at NASA Johnson Space Center. You’ll see spaceships, astronauts in training and the control center for the International Space Station. Our guide took us into an old building that used to serve as a command center for Shuttle missions. I felt as if we were walking through a part of history.

The Space Center tends to get crowded on weekends and during holiday periods. But if you arrive early, you can have the place to yourself, even if it’s just for a short while. It’s one of the best opportunities in America to learn about the history of spaceflight.

When it comes to seeing Houston with kids, there’s more than space.

The kids also enjoyed Houston’s restaurants, conveniently located near these museums. One of our favorites: Kenny & Ziggy’s New York Delicatessen. It’s an authentic deli that serves classics like lox and bagels or corned beef sandwich. They even have fairly unusual dishes, at least for an American deli, like Hungarian goulash. The kids also had a great time at The Classic, which serves terrific breakfast sandwiches and burgers.

Free things to do in Houston

But some of the best things to do in Houston with kids are free. Both of my sons were enrolled in a music appreciation class for community college. One of the class assignments: Go to a concert and write a report. That’s when we found out about the Houston Symphony’s free summer concerts.

We attended a tribute concert to Frank Sinatra and Ella Fitzgerald. My sons do not listen to either Frank or Ella. The Houston Symphony is a class act, and they were seriously impressed by the artistry. Oh yeah, and they got As on their assignments, too. We wanted to attend more of these shows, but had to leave town. Maybe we can come back for the Symphonic Spooktacular in October — just in time for Halloween?

I know what you’re thinking. Houston sounds so perfect, why would anyone want to leave in the summer? Let’s be honest: It’s hotter than a firecracker. Add the humidity of the bayou and you really feel like locking the door to your vacation rental and turning the AC down to 60 degrees. But there’s too much to do in Houston with kids to stay indoors, even during the summer. The kids might not feel like it, but get out there and experience this city.

They’ll thank you for it later. Maybe not in a month, or even a year. But they will someday. Trust me on that.