Home » Problem Solved » I wanted to share a car — not these parking tickets!

When Thomas Bifano booked a Zipcar to run a few errands in Boston, he thought he would only share a car. But Zipcar added one more thing: a parking ticket earned by a previous driver. Now Bifano wants my advocacy team to help us fix his car sharing problem.

This is an interesting case. Car sharing exposes renters to some risks that car rental customers don’t face. But Bifano’s car sharing problem is also bound to start a discussion about two-faced corporations that promise one thing but do the opposite.

Before we go there, let’s take a step back. Some of you are probably wondering what Zipcar is, and how it’s different from a car rental. So let’s get a few definitions out of the way:

Our advocacy team doesn’t handle a lot of car sharing problems. But we have some positive news to report on this one. I’ll have details in just a second.

What is car sharing, and how does Zipcar work?

Car sharing lets you rent a vehicle for a short period, usually by the hour. Zipcar, one of the largest car sharing companies, allows its members to share a car by the minute, hour or day. Zipcar members pay a monthly or annual membership fee in addition to car reservation charges. Prices start at $7 a month, along with a $20 application fee. An annual plan starts at $70.

Avis Budget owns Zipcar, but it’s significantly different from a car rental company. Just how different is not easy for the average traveler to discover.

For starters, Zipcar doesn’t publish its U.S. membership contract online. However, I found the U.K. version. The version is similar to other contracts mirrored on U.S. sites.

And here’s the clause that applies to Bifano’s rental:

The Member is required to pay all fees and costs incurred when due, including, without limitation, application fees, damage waiver fees (if applicable), membership fees (which are automatically charged when due), driving charges (including but not limited to mileage overage and surcharge and/or toll fees), parking charges incurred whilst parking any Zipcar vehicle in an area that is not within the Designated Parking Zone or a Dedicated Parking Space or while parking any Zipcar vehicle in an area where the parking permit provided by Zipcar is not valid, value added taxes and other taxes and levies on any of the fees, costs and charges incurred by a Member.

I’m a little troubled that Zipcar’s U.S. operation doesn’t make its member contract available right up front on its site. We should know all the terms and conditions and be able to access them quickly. I had to go digging for them online. That’s typically not a good sign.

What are you responsible for when you share a car?

A Member is responsible for any and all damage that occurs to a Zipcar
vehicle while in the Member’s possession or control (including the entire time the vehicle is reserved under the Member’s account), even if damage is weather-related, caused by a third party or arises from similar causes.

It’s no surprise that Zipcar just assumed Bifano would pay for whatever it wanted. OK, I’m only half kidding about that. But that contract is some piece of legal writing, if you don’t mind me saying so. 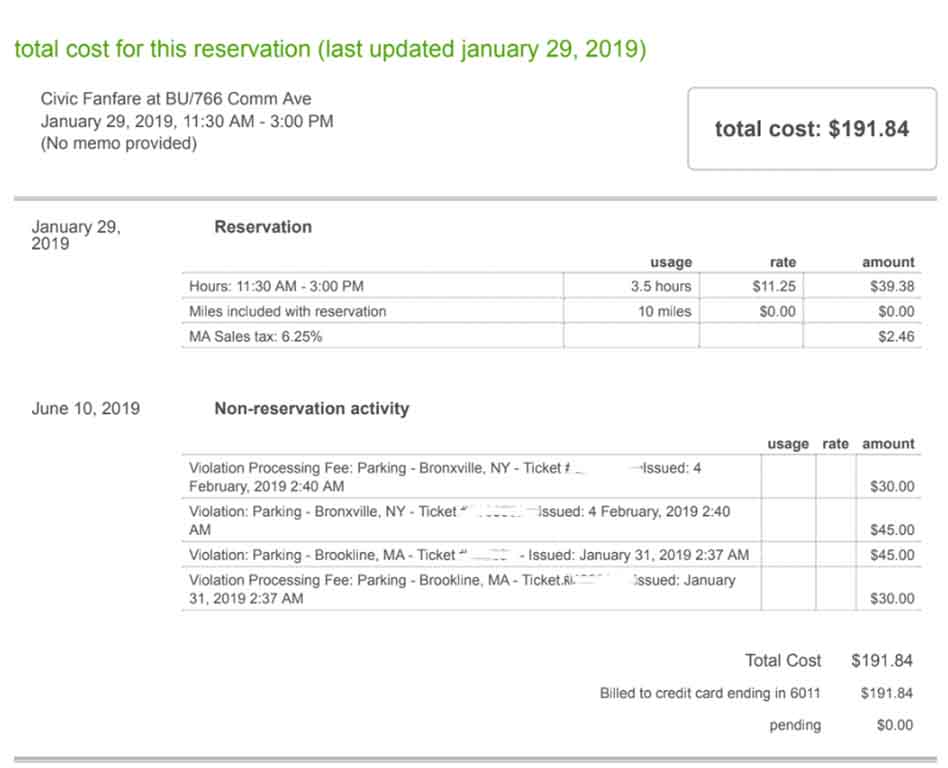 That’s a lot of money for two parking violations. And then there’s the “processing fee.” And it’s already charged his card for all of this? Come on.

But that’s not the most outrageous part.

Bifano says he rented his Zipcar on Jan. 29 for 3 ½ hours. He drove less than 10 miles to Cambridge, Mass., to his business and parked it.

Zipcar sent him a spreadsheet showing the car’s violations.

How to fix a car sharing parking ticket problem

Bifano appealed to Zipcar. He called the company twice — first when he received the erroneous bill, and then to follow up.

“Both times, the customer service agents agreed that the charges were inexplicable,” he says. “Both times, they indicated that they would contact appropriate people at Zipcar, but could not transfer me to them.”

“I haven’t heard from them,” he says. “There appears to be no way to resolve this issue through customer service. The customer service representatives agree with me on the phone, but won’t refund the charge.”

Wait, they admit that the charges are wrong, but they don’t do anything about it? That makes this consumer advocate’s blood boil.

We publish the names, numbers and email addresses of Zipcar’s parent company, Avis Budget, on this site. He could have appealed to one of them.

Bifano was more than patient. He waited almost seven months before contacting my advocates. He gave the company every opportunity to respond — and to make things right. What remarkable restraint.

What if a company says it’s wrong but doesn’t do anything?

Bifano’s case raises an interesting question: If a company admits it’s wrong but doesn’t do anything about it, what are your options?

Here are a few strategies I would recommend:

How this car sharing problem resolved

Our executive director, Michelle Couch-Friedman, contacted Zipcar on Bifano’s behalf. Zipcar refunded the money it had already charged his card and added a $50 credit to his account “as compensation for the inconvenience.”

None of this should have been necessary. Zipcar should never have charged Bifano. The moment he brought it to the company’s attention, it should have apologized and removed the charges.