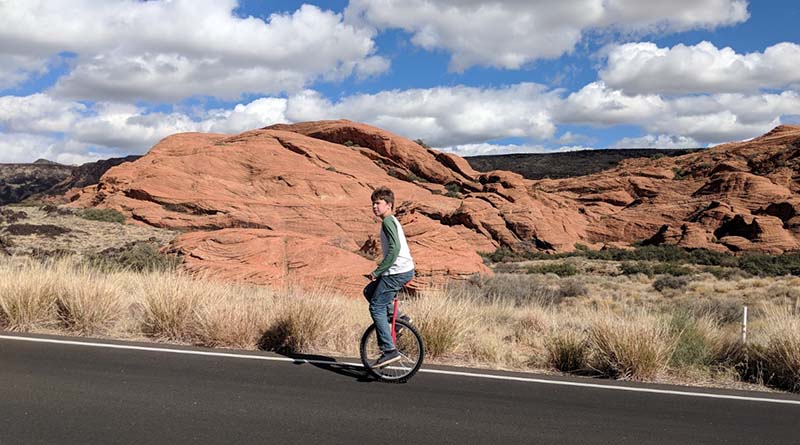 There’s no survival guide for long road trips with kids, but maybe there should be.

Chances are, you’ll drive somewhere in the next few weeks, and you’ll probably need one. Last Memorial Day, for example, an estimated 28 million Americans hit the road — the most since 2005 — prompting AAA to declare that the great American road trip is back.

If you’re one of those motorists, look back now. What do you see in the seat behind you? Kids! Don’t panic. They’re probably related to you.

I’ve tried to write stories on how to survive a long road trip with kids. They usually featured generic tips (“Get an early start,” “Bring plenty of food,” “Reward good behavior.”) Useless, all. Your kids read these articles and use them to develop sophisticated countermeasures to your carefully planned driving vacation.

So today, let’s try something different. I just happened to survive a solo, two day-drive from Spokane, Wash., to Prescott, Ariz., last week. That’s 22 grueling hours behind the wheel. Our road trip was a reminder that survival is more of an exercise in psychology — theirs, your fellow motorists’, and yours.

Want to survive a long road trip with kids? Win them over

And kids, if you’re reading this, I mean “game” in the nicest way possible. Really, I do.

This is especially true if you’re the only driver. You’ll be distracted and won’t be able to give the kids your full attention when a disagreement about seat assignments turns into a full-scale battle of medieval proportions.

Kids will argue about anything. My oldest son, Aren, is a devout vegan; his younger siblings are equally adamant omnivores. Rest stops have to accommodate everyone. In Salt Lake City, that meant half the family ate sandwiches at the Great Harvest Bread Co., and the other half tailgated.

My advice? Start the trip with an armistice. Make concessions, unless you’re auditioning for the World’s Strictest Parents. Negotiate seat assignments, food, device privileges and en-route stops in advance.

I began my last trip with all that, but the hardest negotiation involved devices. I have two kids with a touch of screen addiction, so when I informed them that I’d limit their consumption to a generous two hours, they were outraged. So I traded a desired food stop for some device time, and it seemed to work.

Ah, the power of negotiation.

No, you don’t own the road

The most delicate negotiation when you’re trying to survive a long road trip with kids is an unspoken one. It is between you and the other drivers. Some fellow motorists drive defensively, some drive offensively. And by “offensively” I mean their driving offends everyone else. You don’t want to be the latter.

A recent drive from Durango, Colo., to Silverton, reminded me that the road is a shared place where the most important thing isn’t being right — it’s living to tell the tale.

I’ll set the scene. It was a Saturday morning after a short but fierce snowstorm. The snowplows had cleared the way for us earlier that morning, but a half inch of ice still covered the road. That’s what happens when they plow while it’s still snowing.

For some reason, Highway 550 is the preferred route for people in a hurry who have nothing to lose. I was astonished by the number of out-of-state license plates passing us at high speeds, sometimes in the right lane, as we ambled up the hill with our all-season tires.

One particularly aggressive SUV sprayed a wake of slush on our windshield as it cut us off on the narrow road. “He’s late for his own funeral,” I joked. I tapped the brakes and let him have my lane.

Being right, I explained to the kids, isn’t even remotely important when you’re dealing with Road Rage SUV, or anyone else for that matter. Being safe is.

And you have to read the nonverbal cues other drivers give you. The evil eye. The “go ahead” wave. The finger.

Road Rage SUV could have slid off the road and plummeted down a ravine, but he met a more conventional end. We found him down the road, bathed in red and blue lights of the Highway Patrol. Gotcha!

“I will not let them break me”

But perhaps your greatest adversary on a long road trip is you. That’s especially true if you’re the only driver, a single parent who is outnumbered three to one. If you can’t get your head in the game, you’re in trouble.

I’d love to tell you that the secret to a successful long-distance road trip is simple, like bringing enough food. It’s certainly true that without adequate nourishment, your kids will try to kill each other and then turn on you. But you have to understand that even if they’re well-fed and entertained and happy, the children will eventually go rogue out of sheer boredom.

It doesn’t even take a marathon, 21-hour drive from Branson, Mo., to Orlando to set them off. They’ll do it on a drive across town, just because it would be fun to see what Dad will do if they pull his chain.

None of this will come as a surprise to you if you’re a parent. But what you might not know, especially if you take super-long drives with your offspring, is that with enough mental preparation, you can stay somewhat sane.

When I started traveling solo with three kids, I began a secret pre-trip routine. Yoga. Deep Breathing. And a mantra: “I will not let them break me.” So far, this little ritual has gotten me through crazy-long drives through Nevada, California, Oregon, and Washington — minus the crazy.