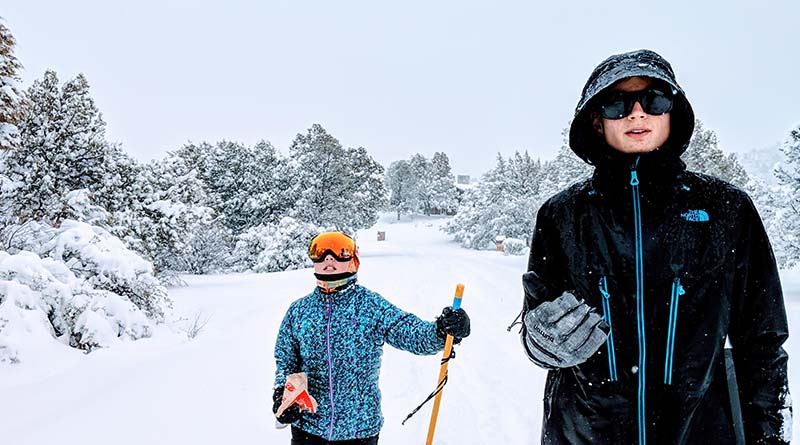 It’s the middle of summer, and chances are you’re indoors right now, a refugee from the unbearable heat. Maybe you’re imagining a cool family vacation.

I was a bad boy last week. I wrote about the triple-digit temperatures in Arizona and how I would happily go back at this time of year. And while that’s true, it would also be accurate to say that I think about snow this time of year. Every member of the Elliott nomadic clan does — even the ones who don’t like to ski.

In a few short months, the first ski resorts will open. First Arapahoe Basin, then Mammoth Mountain, then Lake Louise. And yet, it’s hard to imagine snow falling ever again, because it feels like an oven here.

So let’s think cold thoughts together. Snow can be a lot of fun, but even if you can’t find any in the summer, you can at least head to the mountains to cool off.

How cold does it get?

It’s really difficult to picture a cool family vacation now. On hot summer days in Florida, I used to open the freezer and put my head in it. Sometimes, I see my kids trying to do that, but instead of giving them an understanding nod, I offered a more predictable parent response: “Close that door, you’re letting all the cold air out!”

Your refrigerator is probably cooled to 28 degrees. It’s hard to imagine something much colder — like below zero — with a brisk wind. But I remember one such scenario in Crested Butte, Colo., when we went cross-country skiing in 2017. Colorado in January can be brutal, and the area around Crested Butte has some of the coldest weather in the state. Once the sun went down and we started along our tracks, I could feel the cold burn against my exposed skin. It’s not an entirely unpleasant thought as the air conditioner hums quietly, pumping cool air into my sweltering apartment. But I quickly found shelter, hoping to avoid frostbite.

For a cool family vacation, snow is more fun than heat

My kids and I have visited most of the major ski resorts in America and a few in Europe. When it’s not bitterly cold, it’s a lot of fun. Besides skiing, there’s hiking, snowshoeing, snow tubing, snowman building, and snowball fights.

Our favorite recent resorts include Sun Valley, which reminds me of every Austrian resort I’ve ever visited, and Utah’s lesser-known mountain resorts like Snowbasin and Powder Mountain. But at the moment, those resorts have no snow. It’s summer up there, just like it is everywhere in the northern hemisphere.

So where can you go for snow now? I’m about to violate one of the cardinal rules of travel writing by mentioning a few places I’ve never been. But I really want to take the kids to Valle Nevado, Portillo or Las Lenas in South America. I hear the terrain in Las Lenas is awesome.

Maybe next summer, we’ll head south. We need to brush up on our Spanish before we do.

If you can’t go south, here’s the next best thing

You don’t have to spend all day on a plane to get to a cooler destination. Take Sun Valley, Idaho, for example, where at this time of year the average daytime high temperature is just 79 degrees. That’s much better than the triple-digit heat torture typically found in the big cities. Plus, these mountain resorts tend to be much more affordable during the summer. If you’re an avid skier, you want to see the resort in the summer. In Breckenridge, Colo., last year, when we went ziplining, we had the opportunity to view the contours of some of our favorite slopes without snow. The next time I’m back, I’ll have a better idea of what’s under the snow — and I also have a few ideas of where I’d like to ski.

Mostly, though, mountain resorts in the summer are a relief from the heat. In Colorado last July, we had to wear jackets on the mountain. Now that’s what I call a cool family vacation. Meanwhile, the rest of the country was in a figurative pressure-cooker.

Even if you can’t escape the heat this summer, it’s comforting to know that September is right around the corner.