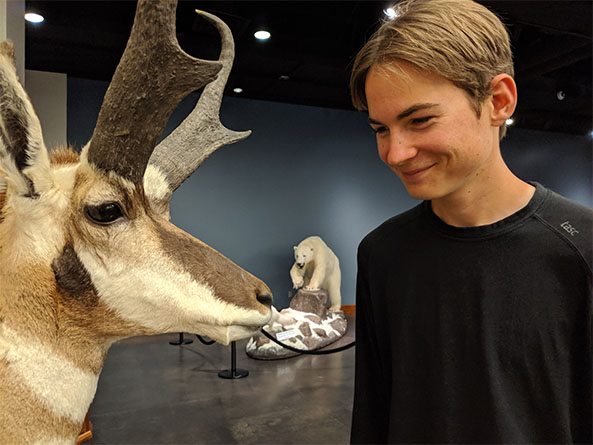 Everywhere we went in Provo, we saw Charlie. There were signs for Charlie on power poles. We saw Charlie — or at least we thought we saw him — zipping between the apple orchards on the sprawling Utah Valley Hospital campus.

No question about it. Charlie was having a wild time in Provo — and so were we.

And who are we? Like Charlie, we’re outsiders, too. We’re the family of four staying in that rental over on North 200 East Street. Oh yes, that’s how they name the streets in Provo and in a lot of other cities in Utah. It confuses Google.

Don’t let Provo’s squeaky-clean, straight-laced image fool you. It can be a wild place. And a little crazy. I’m not just talking about Utah Valley’s latest obsession, a skill that will serve you well in the zombie apocalypse. There are plenty of interesting museums, including one where you can try on a straightjacket. Oh, and we tracked down the llamas, but you’ll never believe where we found them.

How do you throw an ax and make it stick?

One way to have a wild time in Provo: throw an ax.

What’s ax throwing? It’s exactly what you think it is. You grab an ax and hurl it at a target. We stopped by a place called Phat Axe in American Fork to try our hand at it.

Ax throwing is a useful skill in case there’s a zombie apocalypse, a staff member told me with a completely straight face. But you have to throw it the right way so that the ax sticks in the zombie.

I couldn’t believe we were having this conversation here, in one of the most conservative parts of the United States. I guess everyone’s afraid of something. Might as well be the undead.

How do you throw an ax the right way? You have to put the right number of spins on the ax so that the sharp edge sticks in the wood. Also, you don’t throw too hard; let the ax do the work.

I spent a few agonizing minutes in front of a target before one of my kids showed me how it’s done.

Every morning, my oldest son and I walked from our vacation rental in Provo up to the Utah State Hospital, about a mile east. Along the path, we saw two things that made us want to come back. First, there was Charlie. At least we thought it was Charlie. He was eating the ripening apples in the orchards of the state hospital.

Also, there was a museum. It’s open only two days a week, on Tuesday and Thursday from 1 to 5 p.m. Housed in the old superintendent’s home, it displays old instruments used to treat patients from the Utah State Insane Asylum — the hospital’s former name.

Among the artifacts: an Oregon boot (a heavy metal shackle attached to a patient’s leg), a small cage used to subdue patients during treatment and a straitjacket. They even let my daughter try on the old restraining device. It fit pretty well, I told her. She said I shouldn’t get any ideas.

By the way, straitjackets aren’t used in modern psychiatric medicine. The Utah State Hospital Museum shows how far we’ve come in understanding and treating mental illnesses, something for which we should all be grateful.

There are plenty of other museums in Provo worth checking out. They include the Brigham Young University Museum of Art, with works from renowned artists such as Maynard Dixon, Norman Rockwell, and Minerva Teichert. We also liked the Monte L. Bean Life Science Museum, with an impressive exhibit on predators and their prey.

Oh, and speaking of animals, here’s a Charlie update: A docent at the Utah State Hospital said we probably saw a deer, not a llama, in the apple orchards. The deer run wild on the hospital campus. But so far, no one had seen Charlie.

Celebrating India Days (and finding a llama or two)

Our visit to Utah happened to coincide with India Days at the Sri Sri Radha Krishna Temple in Spanish Fork. The last thing you’d expect to see is an enormous and ornate Hindu temple in the middle of Mormon country. And this building is special. It’s based on the famous Kusum Sarovar Temple in Mathura, India, and it’s the only Rajasthani-style building in the US.

Apparently, we missed the big event, the Holi festival — also known as the Festival of Colors — which is said to be the biggest celebration of its kind in the western hemisphere.

The India Days festival featured yoga demonstrations, dancing and lots of Indian food. But it also had llamas. They were in a large pen just a few steps away from the temple. And sadly, Charlie was not among them.

So where was Charlie? On our last walk through town, up to the Brigham Young University campus, we saw the “Missing Llama” sign on a post and assumed that Charlie was still at large. What had happened to him? Did BYU students kidnap the camelid? Or did Charlie just get bored in his pen and decide to take off for the hills?

It’s a mystery. But our adventures on Provo’s wild side have changed how we feel about this place. If you ever find Charlie, ask him. He might agree.

Christopher Elliott is the founder of Elliott Advocacy, a 501(c)(3) nonprofit organization that empowers consumers to solve their problems and helps those who can't. He's the author of numerous books on consumer advocacy and writes weekly columns for King Features Syndicate, USA Today, Forbes and the Washington Post. He also publishes Elliott Confidential, a critically acclaimed newsletter about customer service. If you have a consumer problem you can't solve, contact him directly through his advocacy website. You can also follow him on Twitter, Facebook, and LinkedIn, or sign up for his daily newsletter. Read more of Christopher's articles here.
89072