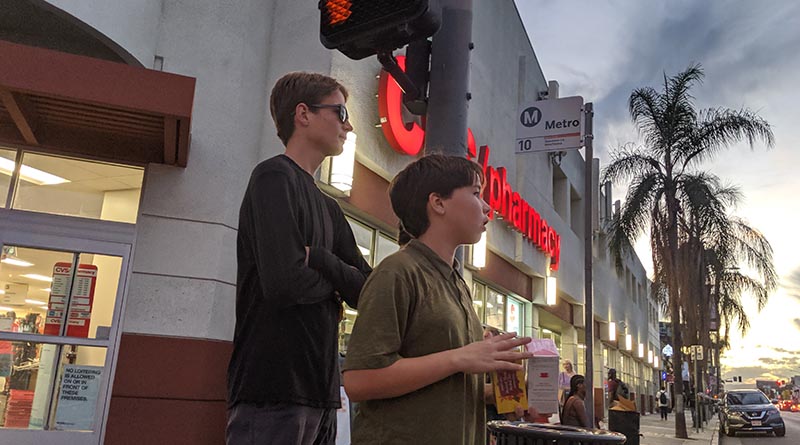 Do you laugh out loud when you hear the words “walkable Los Angeles”? I used to, too, since LA has a reputation for being all freeways and suburbs. But some of the best parts of the City of Angels are more accessible to pedestrians than you might think.

Take a place like West Hollywood, which gets a “walk” score of 91, the highest of any California city. (New York only gets an 89, and Boston scores an 81.) That’s where we recently spent an entire month.

How walkable is this part of LA? Well, we hardly used the car. Grocery stores, restaurants and attractions are easily accessible by foot. Which is a good thing, since gas prices average a little more than $4 a gallon. We explored the city’s cultural attractions and neighborhoods and hiked its canyons — all on foot.

On a side note, I love this kind of travel story because it defies a long-held stereotype, one that we believed until we arrived.

How walkable is Los Angeles?

“What’s here?” asked my skeptical 14-year-old when we arrived. He was unhappy. We’d checked in after dark and were staying in a vacation rental he didn’t like. I knew just enough about West Hollywood to know that it had to be seen to be believed. So that’s what I told him. You’ll need to get out and see LA for yourself.

He did. On the first day here, we walked a mile south to the Original Farmers Market, a small market with fruit stands and gift shops, with a large outdoor mall attached to it. The original market is just like I remember it when I went to school here in the ’80s, but the outdoor mall, which even had its own trolley, was a surprise. At the valet parking area, we saw Ferraris and Rolls Royces. The old LA farmers are probably rolling over in their graves.

The Farmers Market is a great place to find fresh and exotic produce. But to the question “What’s here?” there can be only one answer: everything.

The Hollywood Walk of Fame is a short walk away. So is the Petersen Automotive Museum, one of the finest car museums in the country. Just across from the market, there’s CBS Television City, where you can watch a taping of The Late Late Show with James Corden. And right down the street, you can find Paramount Studios and behind it, the Hollywood Forever cemetery.

And seriously, you can walk there.

Why LA’s walkable neighborhoods are such fun

The neighborhoods between all of the attractions I just mentioned are fun and relatively safe, once you get off the beaten path. For example, our vacation rental was less than a block from Santa Monica Boulevard., a thoroughfare with strip malls, coffee shops and adult entertainment venues. We only ventured on to Santa Monica to go grocery shopping at Whole Foods or Trader Joe’s.

Other than that, we explored the residential communities filled with aging Spanish revival homes and apartment buildings. This is a part of Los Angeles that few get to see unless they live here. It’s quiet even on a Saturday night, and it’s safe. Police cars regularly patrol the area, adding to neighborhood security.

For us, one of the most fun activities was finding homes used in the movies. There’s the Nightmare on Elm Street house on North Genesee Avenue, half a block from Sunset. A little farther south, near Paramount Studios, there’s the Happy Days house on North Cahuenga Boulevard, just off Melrose. For even more movie homes, you can always check out the Universal Studios Hollywood tour.

You can hike in Hollywood, too

If you like hiking, you’ll love LA. Our favorite trails were in Runyon Canyon Park up in the Hollywood hills. It’s a 160-acre city park that affords breathtaking views of Los Angeles. You can also head over to Griffith Park to get a closer look at the Hollywood sign. Bikes & Hikes LA offers a short guided tour to a vantage point to see the sign and the Griffith Park Observatory. The views of Los Angeles from there are even more spectacular than from Runyon Canyon, although my favorite vantage point of all time is from The Getty Museum, a short drive from where we stayed. On a clear day, you can see snow-capped mountains in the east. As you turn west, you can watch the planes landing at Los Angeles International Airport and beyond that the beach and the Pacific Ocean. What a view!

Maybe you can relate to this, but I felt embarrassed after we discovered walkable Los Angeles. After all, I lived in Southern California four years and drove through here a time or two, always judging the city based on busy and often unwelcoming thoroughfares like Santa Monica Boulevard or Melrose Avenue. Had I taken a moment to turn into one of the neighborhoods, I would have discovered the best part of LA.

And now I wonder what other destinations I have all wrong.

Christopher Elliott is the founder of Elliott Advocacy, a 501(c)(3) nonprofit organization that empowers consumers to solve their problems and helps those who can't. He's the author of numerous books on consumer advocacy and writes weekly columns for King Features Syndicate, USA Today, Forbes and the Washington Post. He also publishes Elliott Confidential, a critically acclaimed newsletter about customer service. If you have a consumer problem you can't solve, contact him directly through his advocacy website. You can also follow him on Twitter, Facebook, and LinkedIn, or sign up for his daily newsletter. Read more of Christopher's articles here.
89368