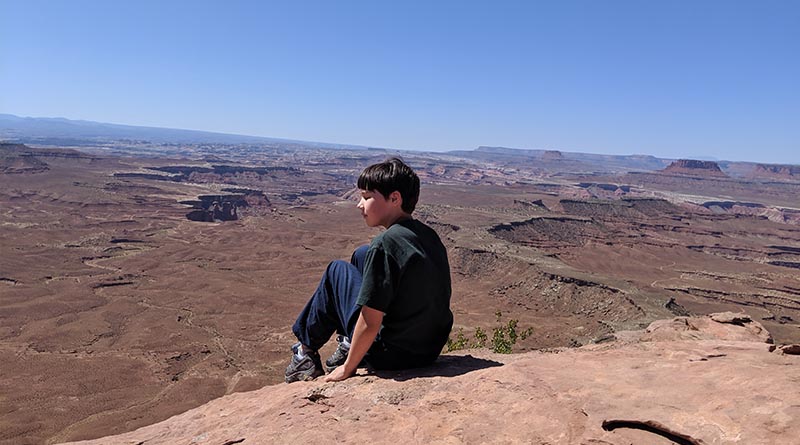 We’d just pulled into the little town of Fruita, Colo., and I peered across the next mountain range. “I wonder what that is?,” I asked no one in particular.

The answer, thanks to Google and a teenager who isn’t afraid to use it: Colorado National Monument.

I’d never heard of it.

As it turns out, my family has discovered a lot of hidden national parks beyond Colorado National Monument. Just a one-hour drive across the Utah state line, there’s another obscure national park, Canyonlands. And a few years ago, we found ourselves in a national park without even knowing it. Now that’s pretty hidden.

Imagine a sheer wall of red and orange granite rocks that rises abruptly from a flat desert floor. That’s Colorado National Monument. You can access the top of the plateau via a winding two-lane road that has “1930s public works project” written all over it.

It’s widely considered one of the great American landscapes — you can almost hear an Aaron Copeland tune echoing throughout the canyon walls.

Of course, I whipped out my annual National Park pass and gave it a good workout for the next few days. Colorado National Monument has some of the finest hiking trails in the national park system. My favorite was the Monument Canyon Loop trail, which takes you past Independence Monument, a 450-foot rock tower. Every time we hiked in the park, we saw herds of desert bighorn sheep and large rainbow-colored lizards wiggling around the rocks.

Colorado National Monument isn’t just hidden to us. While we were there, during the height of the summer travel season, we hardly saw a soul. Where were they? Crowding to the beaches, probably.

Even more Arches in Utah

We discovered the remarkable Canyonlands National Park in a similar way. Last year, we wanted to see Arches National Park, just a short drive from Moab, Utah. But then we heard about Canyonlands and, being adventurous, we decided to drive the extra hour to check it out. I’m glad we did.

Canyonlands has rock arches, too, but it also has enormous canyons the likes of which you won’t see unless you head farther south, to Grand Canyon National Park. That national park, everyone knows.

Canyonlands is a real-life geology classroom. You can see dramatic examples of erosion, deposition and uplift in these canyons. And where are the people? They’re all looking at the Delicate Arch in Arches National Park. But you can walk miles in Canyonlands without seeing anyone. That’s the test of a hidden national park — it’s all park, no people.

I’ve visited Canyonlands twice with my kids. Each time, I regret that I only have a few hours to explore the park. And each time, I come home and look at the photos and ask myself, “Was that really taken on planet Earth?”

Surprise! You’re in the park already

Maybe the biggest surprise, when it comes to a hidden national park, happened when I took a small-ship cruise in Alaska with my kids. The tour of Alaska’s famous inside passage, with its stunning seascapes, glaciers and wildlife, on Alaska Dream Cruises’ Chichagof Dream served up one postcard-perfect view after another. I’d heard about Glacier Bay National Park and hoped we might have a chance to see it.

“How far away is the park?” I asked a crewmember.

Oh wow. I guess I missed the announcement about the park encompassing more than 3 million acres. Everywhere we looked — glaciers, fjords, coastline — it was all national park. In fact, most visitors get to the park by boat, although a few do hike in. That makes this one of the truly hidden national parks, since it’s very difficult to reach except by boat.

Discovering hidden national parks is now one of my favorite hobbies. Whenever we travel somewhere, I search for the nearest national or state park. The more obscure, the better! But I’m not just doing it for journalism. There’s no better way of teaching your kids about our rich national park heritage than by showing it to them — one hidden park at a time.