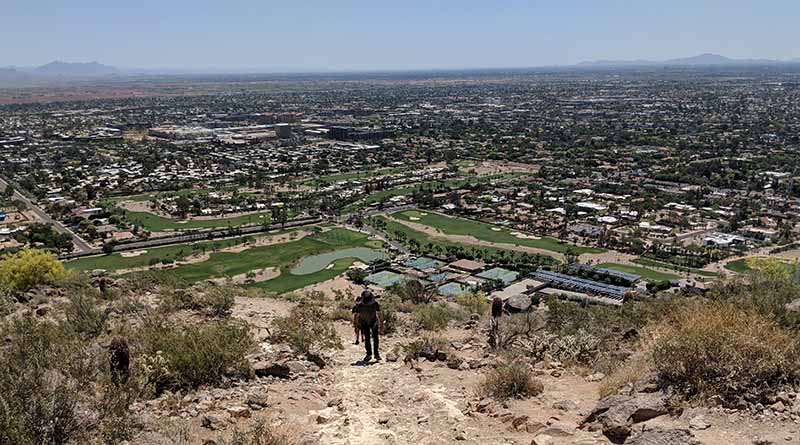 Maybe you laughed when I said Santa Fe was hot last week. That’s not hot! Betcha you wouldn’t go somewhere like Scottsdale in August.

The average daytime high in the Phoenix area is 103 degrees. Yes, that’s dangerously hot. The high temperatures drive away tourists, who are spoiled by the 70-some degree highs in late winter.
Let them have their perfect weather. I’ll take Scottsdale in the summer.

You can do outdoor things in Scottsdale in the summer, but you have to mind the heat and severe weather. Most of the action is indoors, and there are plenty of options to keep you busy. Scottsdale, located just a few miles northeast of Phoenix, has cultivated an image as the Beverly Hills of Arizona. But it’s not. It’s far more affordable and not quite as uppity as Southern California, with a fun Western flair. I wouldn’t go so far as to call it a family destination, but families won’t be bored here.

Yes, you can still hike in the summer, but …

I’m not going to sugarcoat this: Scottsdale in the summer is an inferno. Oppressively hot. Hotter than hot. But it’s a dry heat, and you can avoid the worst of it by doing all of your outdoor activities at dawn and dusk. Our favorite hikes up Camelback Mountain and Piestewa Peak are still doable in the early morning and late evening, but they can quickly turn into an adventure if you overstay your welcome and temperatures rise.

Our preferred walking spot in the afternoon is the Fashion Square, a 2 million square foot, air-conditioned retail space in the center of Scottsdale. (Oh, and did I mention, it’s air-conditioned?). I realize that mall walks sound like a copout, but this is different. Think of this as an enclosed version of the Ala Moana Center in Honolulu, which is probably our favorite mall in the world. Well, there’s the Mall of America, which we also like a lot. Anyway, you can hike this enclosed space endlessly and without getting bored, and it has almost every store in the Western world.

In Scottsdale, everything happens indoors during the summer

When the temperatures rise, we jump from one indoor area to the next. They include restaurants like Green New American and Uprooted Kitchen, two of our favorite indoor hangouts. The Phoenix area also has no shortage of museums, such as the Arizona Science Center, which had a fascinating exhibit on mummies when we were in town; the Phoenix Art Museum, which had a vast display of Islamic art; and the one-of-a-kind Musical Instrument Museum. These facilities are cooled to a comfortable 70-something degrees.

Why you should go when it’s hot

Look, there’s no two ways about it: This place is hot, hot, hot during the summer. You probably don’t want to be outdoors between 10 a.m. and 4 p.m., and nothing I write is going to change that. And as if that’s not enough, you also have monsoon season, a time of sudden, fierce rainstorms and post-apocalyptic dust storms. Beware of flash floods and golfball-size hail.

Yeah, Arizona gets it all at once.

And still, I like this place right about now. And that’s because — you guessed it — no one wants to be here! Even the people who live here try to get out, which makes it a ghost town. Hotels are giving away their rooms. Restaurants are begging you to make a dinner reservation. There are “local” discounts available to all, because everyone is presumed to be local.

In short, you’ll be treated very well if you come to Scottsdale in the summer.

Maybe I’m biased because I have family here, but you don’t have to twist my arm to come to Scottsdale during monsoon season. As a matter of fact, I could ask any one of my kids if they wanted to return and they’d probably say “yes.” That includes dropping them off here during a cataclysmic dust storm — as long as they can find their way to Green New American for a burger after everything settles.