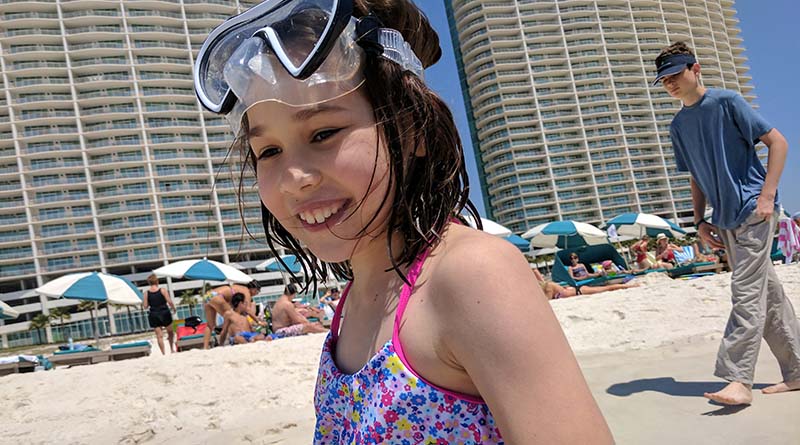 On a frenetic holiday weekend, I drove to Alabama’s Gulf Coast with the kids. Maybe I should have known better.

Shortly after taking the exit off I-10, the traffic on Highway 59 turned stop-and-go. More “stop” than “go,” actually. Our car lurched ahead intermittently, passing T-shirt shops and fast-food restaurants. And I started to wonder if I’d made a mistake coming here during the busiest time of the year.

I shouldn’t have worried. Not only did I survive Alabama’s Gulf Coast with my kids (otherwise, I would not be writing this story), but we actually liked it. As it turns out, there’s a lot to do for the entire family, even when the place is packed with visitors.

Wait, Alabama has a coast?

You might not even know that Alabama has a coast. It does. Alabama’s shoreline along the Gulf of Mexico stretches only 60 miles. Gulf Shores, the largest seaside city, is a tourist town with condo towers, beach houses and shops.

There are 32 miles of white sand beaches composed of quartz grains washed down from the Appalachian Mountains. If you visit Alabama’s Gulf Coast with kids, you’ll discover the beaches are just the beginning of the adventure.

What to do on Alabama’s Gulf Coast with the kids

There’s plenty to do:

Alabama’s Gulf Coast isn’t all condos and restaurants. In the heart of this destination, there’s a 6,500-acre state park. Gulf Coast State Park has 28 miles of bike trails leading through undeveloped wetlands teeming with wildlife. We picked up bikes at Gulf State Park Bike Rentals and headed into the park the next morning to discover this oasis.

Well, at least I thought of it as an oasis. My 12-year-old daughter did not, because it was hot and she was also afraid of alligators. My 17-year-old (you can see him in the background of the picture) was a lot happier to be getting out for a ride. Our hotel, the nearby Lodge at Gulf State Park, was bustling with activity, and he doesn’t like crowds.

The park was the perfect antidote. Even on a busy day, the bike trails weren’t crowded. We pedaled along Rosemary Dunes, then rode along an old access road to the campground. Finally, we biked up a small incline to an overlook on Gulf Oak Ridge, which afforded a view of the entire park and beyond it, the Gulf of Mexico.

My daughter has good instincts. There are alligators in the park — check out this video of a big one pulled out of the water at the park — but as long as you’re on a bike, they won’t bother you.

If you need to get away from the craziness of the beach, Gulf State Park is a good place to start.

Hop onboard a real submarine

If you’re in town for a few days, head over to the USS Alabama Battleship Memorial Park, an attraction featuring a World War II-era battleship, a submarine and warplanes. We happened to show up during a reenactment called Living History Crew Drill (the next one is planned for Oct. 12). Planes were buzzing the battleship, there were loud explosions on deck, and visitors seemed a little confused by the whole thing.

The drill teaches visitors about life on a naval vessel during the war. At 1 p.m., there’s a call to battle stations as vintage airplanes dive bomb the ship. We watched the men, dressed in vintage uniforms, defend the “Lucky A” with antiaircraft weapons. I asked the kids what they thought and they just shook their heads, a little stunned.

Almost every self-respecting American city has a military museum of some kind, but the USS Alabama takes it to the next level. Almost no part of the retired South Dakota class battleship was off-limits to my young explorers, so we got lost a few times.

Interestingly, the tourists from nearby Gulf Coast don’t really flock to the USS Alabama while they’re on vacation. Instead, you’re more likely to find school groups or tour buses full of special-interest visitors. That means it’s not that crowded on a busy holiday weekend.

So, besides the state park, the USS Alabama is at the top of my “recommended” list. Why? It’s not the beach.

So what’s up with the beach?

I’m not going to sugarcoat this part of the Gulf Coast. The beach gets crowded during peak season — and with good reason. You have to see Alabama’s Gulf Coast to believe it. The sand, like fine sugar, and the emerald water defy any description, and the photos don’t do them justice. But you can avoid all the people with a few simple tricks.

Making it through a busy holiday weekend with your kids on Alabama’s Gulf Coast may sound like a challenge, but it isn’t. If you avoid the peak times and head to the right attractions you can leave the crowds behind.

I think part of the charm of Alabama’s Gulf Coast is that it’s not as well known as Florida’s beach resorts. I write this with trepidation because I don’t want too many people to visit. Then again, if they do, they’ll know where to go.