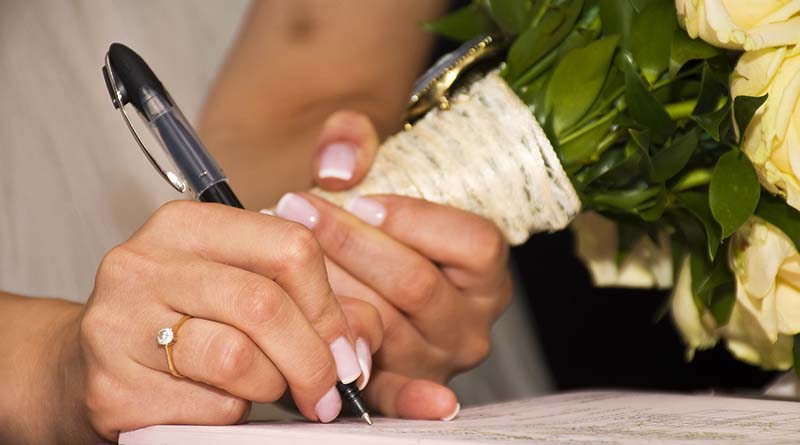 The number of couples signing a prenup is on the rise, according to a recent survey by the American Academy of Matrimonial Lawyers. Almost two-thirds of respondents have seen an increase in the total number of clients who are seeking prenups during the past three years.

At the same time, a tax law change has prompted a second look at many prenups. Under the old tax law, alimony payments were a deductible expense and included in the recipient’s income. But under the new law, if you’re paying alimony, you no longer get a deduction, and your ex no longer counts the payment as income. The new law applies to agreements entered after Dec. 31, 2018, or earlier agreements that are amended after Dec. 31.

“The way the prior law treated alimony payments was a useful tool in settlement negotiations because the recipient is usually in a lower tax bracket than the payor,” says Jessica Woll, a managing partner of Woll & Woll, a Michigan family law firm. “The tax deduction gave the payor a break.”

What does a prenup clarify?

A prenup clarifies your financial rights and obligations, offers protection from debts and settles property rights before you get married. It can also help you avoid a lengthy and painful divorce process.

“Prenuptial agreements can be vital to protecting the interests of both you and your soon-to-be spouse,” says Ted Bond, who founded a family and business law firm in Illinois. “While many couples avoid discussing this uncomfortable subject, a prenuptial agreement can become very valuable in the future.”

So where does that leave you?

Before we continue, let’s get a few things out of the way. Yes, prenups are decidedly unromantic, especially if you’re about to tie the knot. And no, I’m not a relationship columnist or a lawyer. (If you knew me, you would never take relationship advice from me. Let’s leave it at that.)

Still, this is an important topic for consumers, and it can have a direct and lasting effect on your finances for many years to come. There are a lot of reasons to consider a prenup. Given all that’s happened recently, what do you absolutely, positively have to do?

Talk to a lawyer

And not just any lawyer, but someone who specializes in prenups. “Speak to a matrimonial lawyer in that state to ascertain how a prenuptial agreement affects what rights and obligations you may have as a result of the marriage,” advises David Carton, a certified matrimonial law attorney at Mandelbaum Salsburg in Roseland, N.J. A pro can help you obtain a schedule and back up proofs of all assets, liabilities, and incomes, including obtaining any valuations, he says.

In fact, each of you should get your own attorney

Now that you’ve found someone to represent you, ask your prospective spouse to as well. “It’s really important that both parties have their own attorneys to advise them specifically on the terms and the provisions of the agreement,” says Raymond Hekmat, a Beverly Hills lawyer who specializes in prenups. And not just any lawyer, but someone who understands family law. “Some people go to business attorneys or estate planning attorneys, and many of these prenups miss the nuances of family law that are important to include in a valid prenuptial agreement,” he adds.

A basic understanding of your state’s marriage laws is important, says Shaolaine Loving, a Las Vegas attorney. “You’re signing a legally binding document that could alter your rights and obligations during and after the marriage,” she says. For instance, community property states treat property and liabilities as joint during a marriage, so couples may want an agreement specifically rendering each party’s assets and liabilities as separate during the marriage. “Prenups can also affect how property is characterized or disposed of in the event of a spouse’s death, so it’s not just about your rights, but your heirs’ rights as well,” she adds.

“Estate waivers may not be your friend,” says Deborah Kaminetzky, a family lawyer based in Cedarhurst, N.Y. An estate waiver releases an heir from the right to claim assets in the event of another person’s death. She warns that attorneys who only practice matrimonial law often gloss over this portion of the estate waiver in the prenup. “Often, especially in second or later marriages, there is already an existing estate plan,” she adds. “This needs to be acknowledged in the prenup to avoid litigation after your death and ensure that your well-drafted estate plan holds up.”

Make sure you do it right

“Prenuptial agreements are contracts and are generally enforced,” explains divorce lawyer Andrew Winters, with the New Hampshire law firm Cohen & Winters. “However, because of their sensitive nature, they are reviewed carefully to make sure that the agreement was truly voluntarily and does not contain any unfair or illegal provisions.” Winters says the exact requirements for enforceability vary widely by state. But one common requirement is that an attorney is engaged by each party. “It’s also frowned upon if the agreement was reached very shortly before the marriage,” he adds.

Most important, says relationship expert April Masini, make sure you make sure the prenup has been signed and executed by both parties before you walk down the aisle.

“You’d have to be crazy not to have a prenup before marriage,” she says. “You insure your car, your home, your health — you should insure your insurable assets against divorce. It’s not about love — it’s just business.”