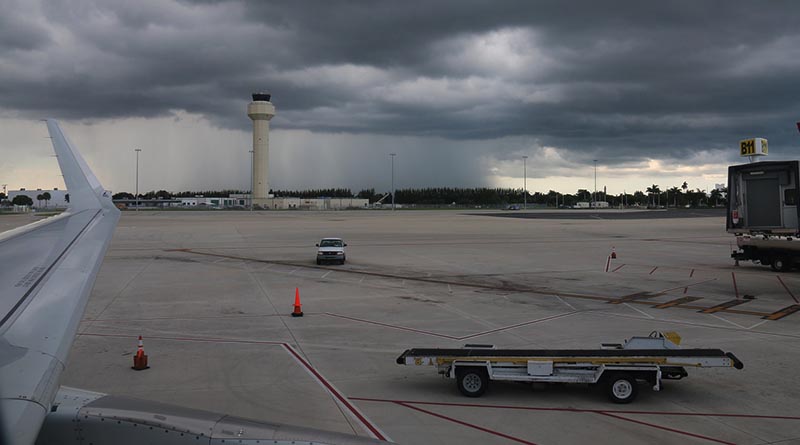 When Mary Herring’s Thanksgiving flight was canceled, she assumed the change fee she had to pay was a misunderstanding between her and the airline.

What followed is a case study in airline change fees from an airline that charges the most reasonable fees of any domestic carrier: Southwest Airlines. It’s also a teachable moment about technicalities that will help you on your next flight.

Her flight was canceled and options were few

Herring’s misadventure started on Nov. 26, the day she and her husband were scheduled to fly home from Raleigh-Durham to Tucson by way of Chicago’s Midway Airport.

“When we arrived at the Raleigh-Durham airport at 4:15 a.m., we learned that our flight was canceled — one of the hundreds of weather-related cancellations that day,” she says. “It was the Monday after Thanksgiving — a busy travel day in the best of weather. Everyone in the ticketing counter line ahead of us was similarly affected and needed to book a new flight.”

Herring checked online to see if there was any space on the next Tucson flight. There wasn’t.

“As we wound our way through the hour-long line to get to the ticketing counter, I listened as agents told most of the people ahead of us that there were no flights available that day, but that they could get them on a flight in one, two, even three days.”

That’s when Herring took matters into her own hands.

The downside of taking control of your itinerary

Herring phoned the Southwest reservations line and got a recorded message said there was a 90-minute wait to speak to an agent. That’s pretty typical for one of the busiest travel days of the year.

“Then I then checked flights to Phoenix — the nearest city to Tucson — and booked tickets on the only flight to Phoenix that day that still had a few available seats,” she says. “When I booked the tickets, there was a warning that I could be charged an additional fee for flying to a different destination than my original ticket. But I felt I had no choice. My husband had to get to work and I was fearful that if I waited until I got my turn at the ticket counter that those Phoenix seats might be gone.”

The Herrings remained in line after they’d made their new reservations, hoping to speak with an agent about their rescheduled flight.

“When it was finally my turn at the ticketing counter, the agent said there was nothing she could do about the added fees,” she says. “I believed her. In retrospect, I realize she could have looked to see if there were any other options. She failed to do that.”

How about a refund on the change fees?

Southwest had billed her an extra $405 to change her destination. Herring followed the Elliott method for addressing a customer service dispute. She sent brief, polite emails to Southwest asking it to review her case.

“I described the extenuating circumstances and asked Southwest to refund the $405 fee it penalized me for flying to the nearest city when Southwest couldn’t fly me to my original destination in time,” she explains.

Herring appealed, asking a supervisor to review her case. (We list the names, numbers, and email addresses of Southwest’s customer service managers on this site.)

“The Southwest supervisor who telephoned in response said she was the original reviewer. After reviewing my request a second time decided to deny it again,” she says. “After a lengthy debate, she offered two $50 vouchers and told me explicitly that they were not a refund but a ‘courtesy’ for my inconvenience.”

Airlines don’t control the weather. Southwest Airlines was correct to cancel the flights (safety first) and like other airlines, it charges change fees. Southwest’s fees are among the most reasonable in the airline industry.

To get a $50 voucher for the “inconvenience” is pretty generous. Sure, the Herrings were inconvenienced by their flight cancellations. And so were the hundreds of other passengers and so, for that matter, was Southwest.

Here’s the problem: When Herring’s flight was canceled, she didn’t wait until she got to the head of the line to give Southwest a chance to fix the problem. Although it’s difficult to predict what might have happened if she’d offered the airline an opportunity to get her home, I’m reasonably certain the airline would have made an effort to get her back home in time. Remember, Southwest also serves El Paso and Albuquerque — so Phoenix wasn’t her only option (but it was her best option).

The point is, you don’t want to be your own travel agent in a situation like this. You need to give the airline an opportunity to fix the problem.

But her flight was canceled. Shouldn’t Southwest waive the change fees?

Southwest’s contract of carriage, the legal agreement between you and the airline, is clear about what it will do on a nonrefundable ticket when there’s an “involuntary” cancellation. Let me quote chapter and verse:

Delays or Involuntary Cancellations. If a Passenger’s scheduled transportation is canceled, terminated, or delayed before the Passenger has reached his final destination as a result of a flight cancellation, Carrier-caused missed connection, flight delay, or omission of a scheduled stop, Carrier will either transport the Passenger at no additional charge on another of Carrier’s flights, refund the fare for the unused transportation in accordance with the form of payment utilized for the Ticket, or provide a credit for such amount toward the purchase of future travel.

Although it doesn’t explicitly say it in this clause, Southwest means that it gets to decide what to do with you — either transport you on another flight, refund the ticket, or offer a credit.

Bottom line: the time to negotiate a ticket to Phoenix is at the airport or by phone before buying the replacement ticket. After that, Southwest has your money; and since it isn’t required to refund the ticket or fee, it probably won’t.

Herring tried to persuade Southwest that it owed her a refund.

“You’re profiting off this ticketing change,” she wrote in one email. “All I have asked is that you refund the surcharge. I’ve incurred other expenses, such as rental car, gas, and food, caused by the delay. But I didn’t ask for that because the weather cancellation that required that was not the fault of Southwest. But refunding the change fee is completely within your control.”

So will Southwest refund those change fees?

We know the folks at Southwest, and we think they’re pretty fair-minded. I get the sense in talking to them face to face that they would prefer not to charge any fees. Given the competitive situation, though, they do — and they try to be as even-handed as they can in applying the rules.

Our advocate Michelle Couch-Friedman reached out to our Southwest contacts and asked them to review Herring’s case one more time. We felt the couple used the information they had to make the best decision possible. Unfortunately, they still managed to get on the wrong side of the rules. A little leniency might be appropriate.

Our contact reviewed Herring’s file and found that the original representative made the right call by denying her refund request. Herring and her husband flew back into a different city.

“This is technically the correct procedure,” our Southwest contact said.

“That said, we’re going to make an exception for her and refund the upgrades $202 per customer.”

That’s a decision that made Herring — and my team — very happy.

Remember this case the next time your flight is canceled. Before you take matters into your own hands, ask yourself: Am I dealing with an airline as fair as Southwest? And do I have the Elliott Advocacy team’s helpline saved in my browser?