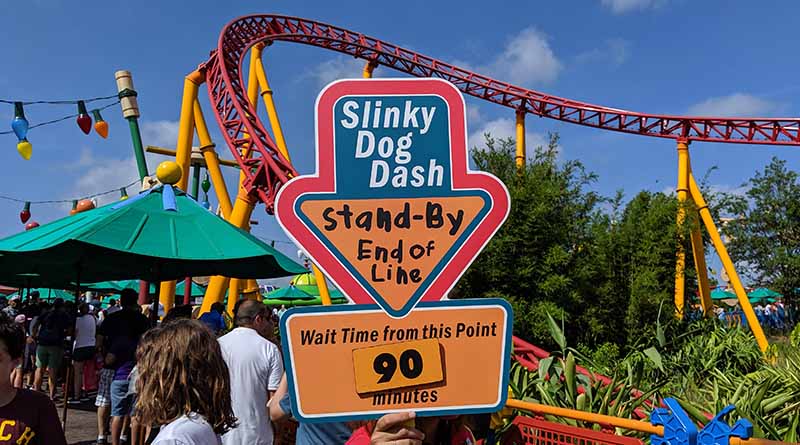 Of all the Disney World secrets I heard when I lived in Orlando, only one made me laugh out loud. It involved the tunnels under the theme park. They exist but are useless to the average park visitor.

Disney cast members use the passageways to move under the Magic Kingdom. And although I never saw them for myself, I always wondered how the tunnels would improve my theme park vacation. Would in-the-know guests slip into a hidden passage to cut the line at Space Mountain?

The Disney World secrets that matter — and which I learned on a recent trip to Orlando with my kids — are simple. Yes, you can cut the line. Also, there’s a best time of the year to visit the park. And even if your timing’s off, you can still avoid the crowds.

How I discovered these Disney World secrets

Actually, it would be more accurate to say I rediscovered these strategies when I spent a few days at Disney World this summer.

We chose three of the busiest days of the year, right after the Fourth of July. Kind of a rookie mistake. The parks were operating at capacity. On popular attractions like the Slinky Dog Dash, a rollercoaster ride at Disney’s Hollywood Studios, the posted wait times were more than an hour and a half. Add to that the oppressive heat and humidity of Central Florida, and you can imagine how everyone felt.

Many park visitors seemed just to be enduring their park visit. “I’m doing this for my kids,” the adults say, as they wait patiently in line.

Yet some of the visitors appeared to be having a grand time.

What was their secret? Deep breathing exercises? An adult beverage? And then I remembered all the tricks I knew but then had forgotten after I left Orlando. No, you don’t have to join a commune or raid the Publix wine section to stay sane during your Disney World vacation.

How to cut the line at Disney

True, a lot of people were waiting in that Slinky line. But they didn’t have to. Had they signed up for Disney FastPass+, they might have avoided a long wait. FastPass lets you reserve access to select Walt Disney World theme park attractions, plus entertainment and character greetings, a month in advance. If you’re staying at a Disney resort, as we were, you could sign up 60 days in advance. You can make up to three reservations per day at the same park.

Now, three reservations may not sound like a lot, but if you use FastPass+ on the most popular rides, you can avoid almost all of the lines. My kids used their FastPasses at Big Thunder Mountain Railroad, Toy Story Mania!, and Avatar Flight of Passage at Animal Kingdom, which is one of the best new Disney rides in years.

FastPass+ works with the RFID-enabled wristbands or admission ticket at the Disney parks. So there’s never a need to fumble around for a ticket. Just wave your wristband, and you’re in — as long as you made a reservation for the right time.

How to time your Disney World visit perfectly

Although Disney World is prepared for the onslaught of visitors during the holidays, it is better to avoid the crowds altogether. And you might not realize it, but Disney tells you how to do it.

First, check the blockout dates for annual pass holders on Disney World’s site. Check the silver or weekday select pass, which show more of the high-volume days. Typically, those are the days to avoid when you’re planning a Disney World vacation.

Next, Disney World recently changed to a dynamic pricing system, which means demand drives the ticket prices. So if you see higher prices, chances are the park will be more crowded. Avoid those days.

And finally, when you’re on the ground, the MyDisneyExperience app can also help. It displays monthly park hours, entertainment schedules and attraction wait times. If you see a long wait time and you don’t have a FastPass reservation, skip it and return when there’s a shorter line.

I’m one to talk. I knew about the passholder blockout date, but I wasn’t flexible on my Orlando dates. If I had my choice, I’d be there in early fall. That’s typically the slowest time of the year. It also starts to cool off in Orlando.

To take advantage of this secret, consider spending a few extra bucks for an on-property hotel. That will let you get into many of the parks a full hour early. Be there when the gate opens. Why? On even the most crowded days, few people bother to show up early. After all, they’re on vacation. They’d rather sleep in and enjoy that all-you-can-eat breakfast at the Whispering Canyon Cafe.

Let’s not kid ourselves about the weather in Orlando. By 11 a.m., it’s blazing hot, and no one wants to be outside. But if you’ve already seen the best rides, you can return to your room, have lunch and take a nap. Then return to the park around 4 p.m. when everyone else is leaving, take a few more rides, and see the fireworks.

So for the best Disney World experience, remember: Move in the opposite direction from the herd. Plan your visit during the off-season. Use Disney’s technology to reserve your favorite ride.

Sure, these may be open secrets. And maybe they aren’t as spellbinding as secret passages under the theme park. But I lived in Orlando for 12 years, and I had to relearn them when I visited Central Florida this summer. That doesn’t have to happen to you.