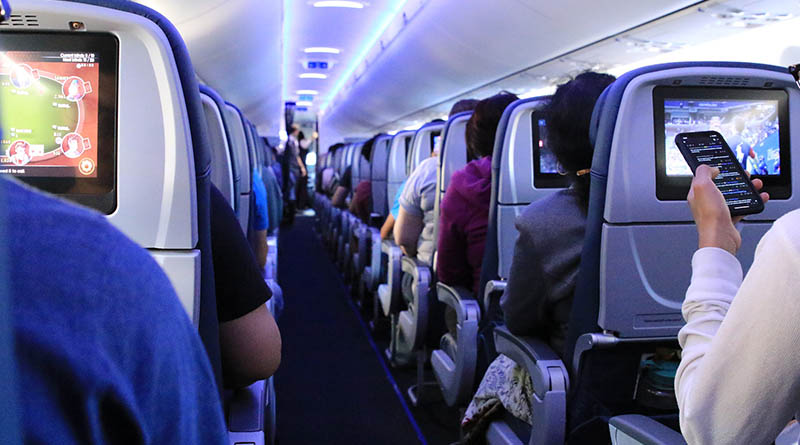 What’s the weirdest thing you’ve ever seen a passenger do on a flight?

If you said, “Change into pajamas midflight,” then maybe you were on my red-eye from Orlando to Frankfurt, Germany, during which a passenger disappeared into the restroom and emerged in a nightgown.

It happens more often than you’d think. John Gray, who owns a company that sells gift baskets in London, admits to changing into his jammies on long flights.

“I like to wear my Pikachu onesie,” he says. “It’s super comfy and helps me get a good night’s sleep on long-haul flights. I usually get a smile from everybody who sees me and nobody has ever said something weird.”

Some passengers like to get comfy — in their PJs

There’s a subset of airline passengers like Gray who take hitting 30,000 feet as an invitation to make themselves at home. And then some.

“Children in pajamas on a plane are one thing,” says Barbara Warrington, a retired occupational therapist from Incline Village, Nev. “Grown-ups are quite another — and, I would suggest, a no-no.”

But wait. Isn’t there a waiver for first-class passengers in those lie-flat seats? Yes, suggests Lauren Guilfoyle of Emirates Airline. Her air carrier hands out sleepwear with “moisturizing” qualities to first-class passengers. “The natural ingredients of shea butter and argan oil are released as you move, so your skin stays moisturized and protected,” she explains.

Well, if you have $12,000 to spend on an airline ticket, I suppose you can wear anything.

For the rest of us, April Masini, an etiquette expert based in New York, has the following advice: “Adults should not wear pajamas on a plane.”

They are, she says, “exhibitionists looking for attention,” and you should probably expect more and stranger behavior from them, especially if the flight is long.” (For the record, Gray says that other than wearing his jammies, he’s never done anything unusual on a plane.)

Whatever it is that causes some air passengers to put on their pajamas prompts others to take off their shoes — and even their socks. It’s baffling because, on land, these people would never dream of placing their shoeless feet on, say, a restaurant table. It can also turn ugly when those same passengers feel it’s acceptable to rest their feet on the seatbacks or armrests in front of them.

“It’s a personal-space invasion,” says Lori Geoffroy, a frequent air traveler from San Francisco who channeled her distaste for this type of behavior into her business. Her company, Ickerz, sells a line of novelty stationery products featuring cartoon animals stuck in (I’m not making this up) “smelly situations.”

“It’s annoying,” Geoffroy says, “when people put their feet on the armrest of the passenger in front of them — and it’s even worse if they’re shoeless.”

Todd Brown remembers a recent flight from Hong Kong to Istanbul when he saw the weirdest thing. A man across the aisle calmly removed his shoes and socks and began clipping his toenails. “After finishing his toenails and fingernails, he then got a bottle of clear nail polish and proceeded to start painting his nails,” recalls Brown, a sales manager from Newtown Square, Pa.

So what can you do if you find yourself getting a very close look at a fellow passenger’s pedicure? From my experience of mediating travel disputes, both in the air and on the ground, your options are limited. Dirty looks only ratchet up the tension. Your best move is to move. Find an empty seat or ask a flight attendant to reseat you. Don’t make a scene.

If another seat isn’t available, try hanging out in the galley in the back of the plane. You may have to take your seat if you hit turbulence, and a crew member might shoo you back to your seat during meal service. But it can be preferable to the alternative.

At best, the odd things other passengers do can make your summer vacation memorable. Amy Bloomer, a professional organizer who lives in Baltimore, recalls an overnight flight from Washington to Zurich during which she sat next to the weirdest passenger ever.

“She got up to go to the bathroom and then emerged with a full head of hot rollers,” Bloomer says. “I marveled at how she was able to sleep so easily with a head full of plastic.”

In the morning, she asked if Bloomer would be bothered if she removed the rollers in her seat.

“I said that would be fine,” she recalls. “She told me she had a photoshoot shortly after we were due to land and she wanted her hair to be perfectly coifed.”

Maybe it’s best to take the oddness in stride. Flights don’t last forever, and most of the unusual behavior isn’t offensive but may be photo-worthy. Of course, there’s an Instagram account for that: @passengershaming, which is run by Shawn Kathleen, a former flight attendant.

But you should probably wait until after you land to share your image of the barefoot passenger or the seatmate in rollers.