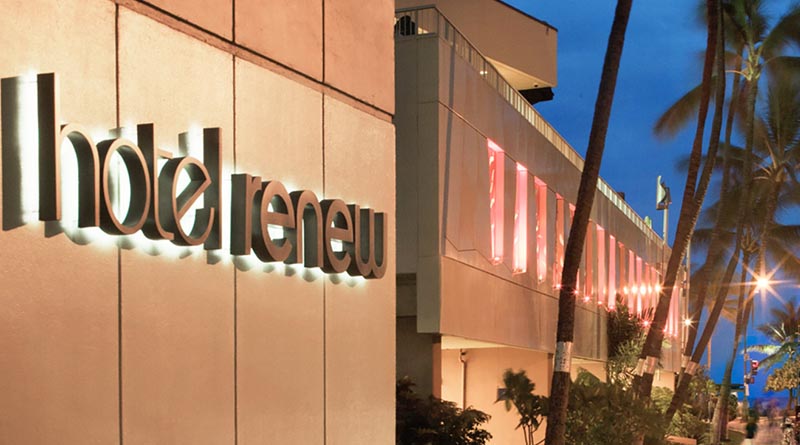 How do you improve a hotel’s service? One answer comes from a boutique property in Honolulu, appropriately called the Hotel Renew.

The Hotel Renew needs a renewal, according to its management company, OLS Hotels & Resorts. During the next few months, it’s transforming this 72-room property, located just a block away from Hawaii’s famous Waikiki Beach, into a different kind of hotel — shortened to just Renew.

“We’re brightening up the rooms, and giving the place more of an island theme,” says the company’s vice president, Rob Robinson.

Hotel Renew’s renewal is playing itself out across the entire lodging industry. Hotel occupancy is currently at record levels, according to analysts. PWC predicts steady rate growth through next year, amping up the competitive pressure but also giving hoteliers more money to invest in improvements. How they upgrade their properties can determine their success for years to come. And while it’s one thing to review guest comment cards, it’s quite another to thoughtfully implement the suggestions.

The Hotel Renew’s new look and approach to customer service, which brings it closer to its Hawaiian roots, will unfold in early 2019.

OK, who doesn’t listen to customers?

First, a little reality check: No hotel in the world will admit to not listening to its customers. And everyone cares about hotel service. The general managers I meet swear on Conrad Hilton’s grave that they read every guest comment card and take the feedback to heart.

But that’s not entirely true. Chain hotels are locked into franchise contracts that don’t allow them to make significant changes. Want to switch the hand soap in your bathrooms? Managers can’t. Even independent hotels have a limited budget to make improvements.

Truth is, hoteliers do what they can — which, often, is not much.

The Renew had an advantage: new owners who knew the property needed a facelift and were willing to pay for it. OLS reviewed the guest comments and then hired Honolulu design firm Vanguard Theory to execute the redesign.

“We pay attention to our guest surveys,” says Robinson. “They were asking for this.”

Hotel Service 101: What the Hotel Renew is doing

For the moment, the Hotel Renew is a nice but ordinary hotel. The small public areas are clean, with a minimalist feel. The rooms appear to be Asian-inspired. The furniture looks up-to-date, and the beds are comfortable. The staff is attentive and addresses some of the guests by name. In a place like Waikiki Beach, that is remarkable.

So what’s going to change? The new Hotel Renew is pivoting back to its boutique roots, becoming a conduit to the local community. It wants to be known for its connection to Hawaiian healing. When you think of the Hotel Renew, the owners want you to think of wellness, beauty, Ayurvedic elixirs, and of its holistic, lifestyle-conscious guests.

“People who come here want to experience a vacation beyond the places everyone visits — Pearl Harbor, Waikiki Beach, Manoa Falls,” says Robinson. “They want to connect with the local community. They want to buy local products.”

Practically speaking, that means establishing preferred relationships with local yoga studios, guides, and tour operators. Their goal is to offer off-the-beaten-path experiences no one else is likely to have on Oahu.

Hotels will serve as a cultural hub

“We want people to leave the place better than they found it,” says Robinson.

Hotel Renew is at the vanguard of a bigger lodging trend, and according to Alex Shashou, the co-founder of the hotel operations platform ALICE, this type of authenticity will be a major factor in hotel experiences in 2019.

“Hotels that don’t want to be viewed as a commodity need to stop treating their guests like one. A guest is so much more than their reservation,” he says. “Guests deserve to be treated like family. Once they are, meaningful and authentic relationships will not only forge, but flourish.”

Shashou says in 2019, he expects more hotels will strive to deliver authentic experiences to their guests.

“Hotels will serve as technology and cultural hubs, introducing guests to the tastes and sounds of the city,” he predicts.”Hotels will be choreographers and architected spaces for connection. They will play matchmaker for each guest and fill the expectation as a culture center.”

Then there’s the look and feel of the new Hotel Renew. The property is centering itself on a wellness theme, but it’s using a specific definition that it says customers wanted. Wellness, it claims, is “often associated with spa and fitness centers” that offer whirlpools, saunas, and steam rooms.

But some of these “wellness” concepts are less than authentic. For example, Hawaii spas often market their beauty treatments as “Hawaiian” because they use Hawaiian words. But guests want something real. They’re also frustrated by greenwashing, better known as fake environmentalism. That can mean not servicing a guest room to save the environment, but also to save the hotel from having to clean the room.

Finally, guests said they were frustrated because the idea of “wellness” seemed to be out of reach to all but the guests willing to pay big bucks for their accommodations. The Hotel Renew is marketing itself to guests who want to feel well without having to take out a second mortgage.

But the renovation, which will take between four and six weeks this spring, will be more than skin-deep. The Hotel Renew is also retraining its staff to help meet the new guest hotel service expectations.

“An important component of this redesign is time spent with staff,” says Robinson. “It’s important that they understand the concept and buy into the wellness theme.”

Will the redesign work?

There’s something potentially even more exciting happening behind the scenes as this hotel listens to customers. OLS is known for leveraging technology to improve the performance of its properties. So far, it has used data to optimize its room rate — in the industry, it’s called “revenue management.” There’s also the promise of taking guest feedback and other booking data to improve customer service.

Large hotel chains already use this kind of information to improve some of their customer service processes. That may account for the two-point rise in the overall industry’s customer satisfaction scores in 2017, which held steady this year. It may also explain the low level of hotel service complaints that I receive on my consumer advocacy site. Back in 2007, when the industry had a less-than-desirable score of 71 out of 100, I heard from a lot of unhappy guests. The industry score is now at 76.

I asked Robinson about the possibility of harnessing data to improve service. He said that OLS uses the data it collects to make its hotels more profitable and would also consider using these data to increase customer satisfaction.

And happy customers can directly affect a hotel’s bottom line. After all, a boutique hotel like the Renew relies on repeat guests — as long as they’re coming back, the Renew is likely to thrive.