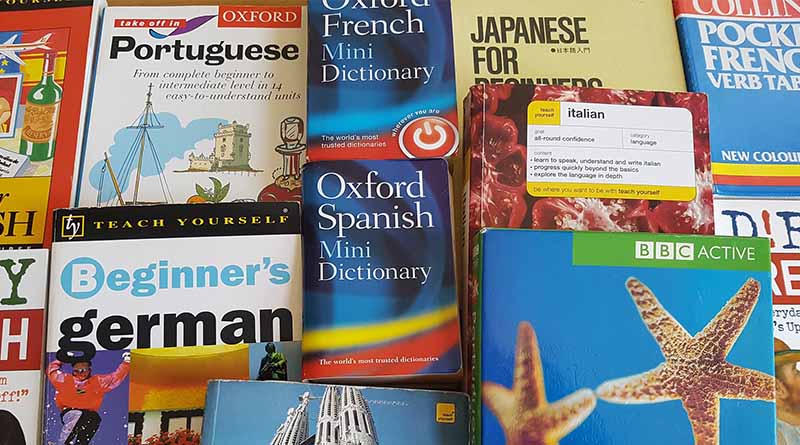 My parents moved from New Jersey to Passau, Germany, when I was a toddler. After a few weeks of playing with the neighborhood kids, I spoke fluent, Bavarian-accented German. That’s probably not an option if you want to learn a new language before your next international trip, but there are some new ways to learn key words and phrases before your departure.

“The ability to communicate basically can be done pretty quickly with almost any language,” says Marc Greenberg, who directs the School of Languages, Literatures & Cultures at the University of Kansas. “Acquiring literacy — writing, speaking in all circumstances, comprehension of all types of communication — takes a lot longer.”

Why should you learn a new language?

So why bother? Because not everyone speaks English. Knowing the difference between “Ja” and “Nein” can help you get around, and people generally are more receptive when you try to speak their language.

Besides playground immersion, the best way to learn a new language used to be in a classroom. My parents used the Berlitz method when we moved to Europe. Today, there are all kinds of options that use technology to give you a linguistic edge, and perhaps even a cultural one.

The last few years have seen a proliferation of language-learning software. These programs — many of which have popular mobile apps — use such techniques as gamification, crowdsourcing and adaptive algorithms to help beginners learn language basics.

For example, Memrise, a combination of user-generated language-learning platform and professional language course that uses flashcards as memory aids, can help you nail the basics. Memrise offers instruction in 25 languages, and its basic level is free, with some advanced features like progress statistics available at $4.99 per month.

Duolingo, another program with free and premium levels, offers courses in 37 languages. It’s one of my 16-year-old son’s favorite language-learning tools, probably because it treats the process like a video game, allowing him to collect points for scoring well on the evaluations. Mango Languages, another well-regarded program, includes notes on cultural context and language. Many of its best features are available only to subscribers, who pay $19.99 per month.

Rosetta Stone is perhaps the best-known language program and one of the most expensive. You can buy its classes — which focus on developing spoken fluency — through an online subscription.

There’s also Babbel. With more than 1 million active, paying subscribers, it’s among the largest language programs. It costs $6.95 to $12.95 per month, depending on your level of use. According to the company, 73 percent of its users could have a short, simple conversation in a new language within five hours of using the app.

There are so many language apps, all claiming to be the best, that there are even sites to help you sort it out. You can find detailed reports on these programs on Compare Language Apps, an independent testing site run by Roumen Vesselinov, a professor at Queens College in New York.

Vesselinov told me that he’s skeptical of some claims made about apps, particularly claims that you can learn a language quickly. “Language app users need to study, on average, 20 to 30 hours in a two-month period in order to cover the requirements” for the first semester of college Spanish, he says.

I’ve had access to most of these apps over the years, but found that they were either too complicated or too time-consuming to help me learn a language before an international trip. Maybe my experience of acquiring a language early in life and then trying to acquire another in a classroom (three years of French, which didn’t really stick) also contributed to my skepticism.

I’m not alone. Dane Kolbaba, who owns a pest-control company in Roselle, Ill., also has reservations about the programs, both in the classroom and online. He spent two years preparing for a move to Venezuela, which included intensive language classes.

“When I got to Venezuela, I was in for a rude awakening,” he says. “I had no idea what people were saying to me and no idea how to respond. The accent was just too different for me than my American teachers’. It took me about six months to really understand everything being said to me — and only after speaking Spanish 24 hours a day.”

Martha Merritt, the dean of international education at the University of Richmond, uses Duolingo to build her vocabulary and to fine-tune a language she already knows. But learning Russian took her five years in a classroom and a year in Moscow.

“That isn’t always a realistic expectation for language learning,” she says.

The language experts I spoke with say you shouldn’t allow the promises of a course or an app to fool you into thinking that you’ll easily learn a language before your next international trip. Greenberg, the University of Kansas professor, says that having already learned at least a second language helps a lot, “so that language-learning isn’t mysterious.” And experts agree that there’s no substitute for on-the-ground experience practicing and speaking a new language.

“Think of learning a foreign language like learning to drive or playing an instrument,” says Maureen Linden, a retired French and Spanish teacher from Miami. “Be satisfied with the basics for a long time and work slowly forward.”

What if you don’t have the time? You can always cut corners and let the app do the talking. A real-time translation program like Google Translate can quickly, and reasonably accurately, translate simple English words and phrases into another language — and translate into English what someone is saying to you. Be sure to download the language so you are not reliant on cellular service.

Michele Frolla, a Londoner who writes a blog about travel and language, called the Intrepid Guide, says she recently turned to the Google Translate app while visiting Ostrava in the Czech Republic.

“I couldn’t understand the staff at the train station, and needed to get a train to the airport,” she says. “It worked like a charm.”