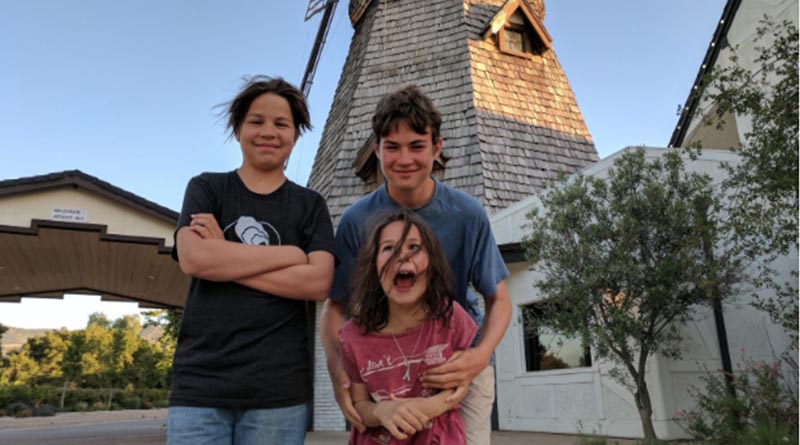 If your family vacations are fraught with conflict, then welcome to the cold, hard reality of life on the road. But the fights aren’t inevitable, even if you’re traveling with kids who seem to thrive on chaos. Yes, you too can end a vacation conflict and keep the peace — maybe.

I ought to know. I’m writing this story in my basement. It’s the only quiet room in the house. Every 10 minutes, one of my kids interrupts me with some intractable dispute. “Dad, he’s watching YouTube again — take away his phone,” or, “She hit me!”

No one knows exactly how much families fight on vacation, but a recent survey offers a clue. It found that couples squabble over technology use and money. I’m willing to bet that these arguments extend to kids, too.

The fix: a combination of positive reinforcement, sleight-of-hand, and logic. In that order.

Here’s a real-time update: As I tried to finish this paragraph, my 13-year-old son burst through the door, pursued by his 11-year-old sister. She was brandishing a gray styrofoam pool noodle, declaring, “I’m going to KILL you!”

“What’s the problem?” I asked.

“He breathed on me,” she said.

Seriously? OK, that’s a first. But for every conflict, there is a resolution. The pool noodle goes in “time out,” and we move to assigned seating in the living room — well out of breath range. Problem solved. Until the next conflict arises, which will be in about 10 minutes, give or take.

Oh, hang on. Didn’t even have to wait that long. Now the 13-year-old is challenging his sister to a “street fight.” I’m not making this up.

Want to end a vacation conflict? Encourage the opposite of it

Here’s a bit of advice I got from an animal trainer at an amusement park many years ago: Encourage positive behavior instead of punishing negative behavior.

When I took this photo of my son and daughter getting along, I was smiling from ear to ear. I didn’t want to overdo the reinforcement, because kids pick up on that too. They think it’s not cool when you do something Dad really likes. But still, it’s worth focusing on the positive. So how do you do that?

Verbal reinforcement. I believe my exact words were, “Awww, it’s so nice to see you getting along.” (My son threatened to drop her, but he didn’t.) They knew I was happy.

Rewards. You can offer anything from extra computer time to a special meal in exchange for approved behavior. In this particular case, it was a trip to Harmons, their favorite grocery store in St. George, Utah.

Written encouragement. In other words, this story, which they will probably read after it’s published.

I think it’s worth underscoring that a more positive outlook is far better than zeroing in on what’s wrong. (“Why are you two fighting again?”) Kids have a natural defense mechanism for that. But they can sense your desperation for peace when you’re on the road. You’re out of your element, and you want so badly for the experience to be perfect, that the balance of power suddenly shifts. And then it becomes a “what’s-it-worth-to-you?” proposition. You don’t want to go there.

Steer the conflict in a different direction

When you travel with your family, they inevitably aim their weapons on each other. I don’t just mean that in the metaphorical sense. On our last car ride, my daughter somehow got her hands on a Nerf gun and a few foam bullets. That wasn’t fun.

Finding something that looks forbidden, but is perfectly safe, is a nice diversionary tactic. It reminds me of the time the kids were arguing on a walk through Garden of the Gods in Colorado Springs.

To restore peace, I asked my daughter if she wanted to go past the gate that said “Stop! Climbing Gear and Permit Required.” She read it literally — that you were not allowed to go even one inch past the gate without ropes and crampons. I knew that the mountain was at a safe distance. The fight ended as she posed for a picture, and the kids got along for the rest of the tour.

You can use diversions at any point in your trip. If they’re complaining about a long car drive, refocus them on something interesting on the journey. (License plate game, anyone?) If they’re arguing about dinner, direct their attention to more important matters — like dessert. (By the way, this works great with adults, too. Just don’t let them know you’re doing it.)

You can stop laughing now. Your family might appreciate an occasional appeal to their rational side. I’ve found that adults constantly underestimate the ability of their kids to think reasonably. Exceptions include when they’re hungry, tired, or bored. If you said, “But Chris, that’s always,” then maybe you’re traveling to the wrong places.

For me, “reason” means explaining to the kids that some things are unchangeable. No one controls the weather, for example. It’s impossible to conjure up an In-N-Out Burger in Louisiana. No matter how hard you hug that bear statue in Rapid City, S.D., he won’t move.

Conversations like these are reserved as a last resort when all of my positive reinforcement and diversions have failed. And I should add that there’s no guarantee this, or any, of my vacation conflict strategies, will work. I mean, you know your family. If they’re anything like mine, they are who they are. You can plead and reason with them and still not get to a peaceful place.

That pool noodle is still in Toy Timeout. I think it’ll stay there for a while. Like, until next summer.