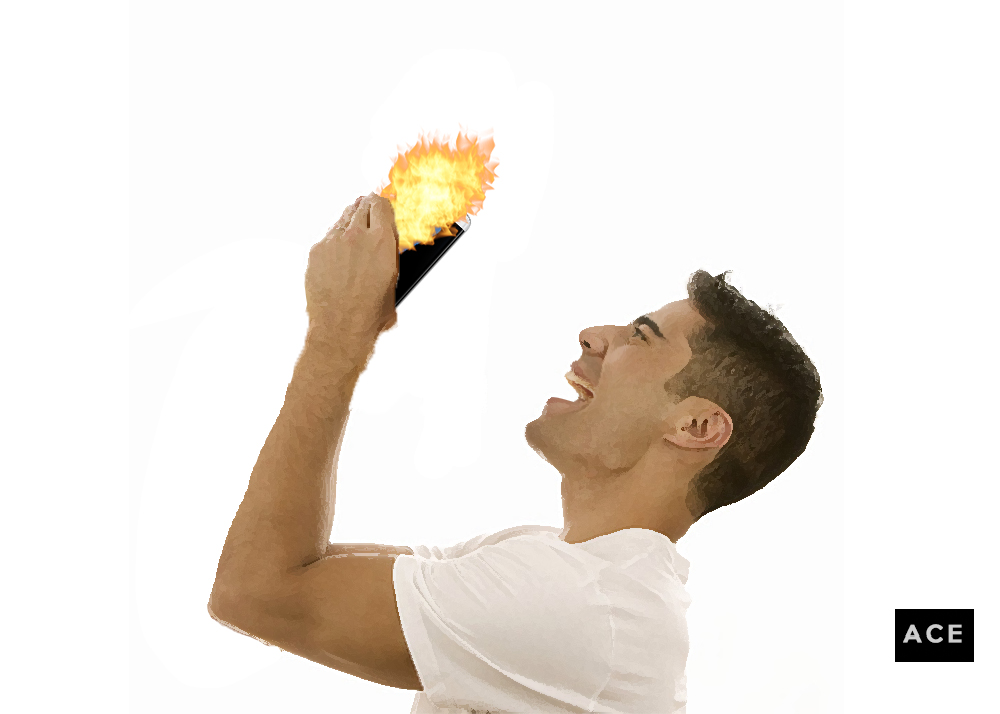 As Samsung’s Galaxy Note 7 problems take a turn for the worse, customers are facing new fears—and some have even encountered unexpected fees—in their efforts to find a safer smartphone.

Samsung recalled its newest phablet last month because of a defective battery that’s prone to spontaneously combust, offering an exchange or refund and a $25 gift certificate. Then several replacement units reportedly caught fire, too. Samsung “temporarily” halted production of the beleaguered handset on Monday and made it permanent today.

Now, nervous Note 7 owners are wondering what to do next. The short answer: Get a new phone—soon. A path to a refund or exchange is relatively easy. Customer service experts say this episode, as bad as it is, is an opportunity for Samsung to either win over their users or to lose face.

It’s not that Samsung hasn’t taken steps. “They apologized and they offered to fix the problem,” says customer service consultant Shep Hyken. But this crisis goes beyond replacing a faulty phone.

Consider Travis Grammer, an early adopter of the Note 7 who pre-ordered his phone Aug. 19. and received it a month later. Grammer, who works for an insurance company in Cape Girardeau, Mo., paid $879 for the smartphone and says it’s a “great device.” But when he heard about the recall, which Samsung claims affected only 0.1 percent of all devices, he immediately returned to Best Buy, where he’d purchased the Note 7.

“They were ill-equipped to handle the exchanges,” he says, noting that employees seemed to discourage exchanges and downplay the significance of the recall. As a result, he says, he’s lost trust in Samsung and will ask for a full refund.

“I’m now trying to determine what my next device will be and how quickly I can order it,” he adds.

According to Best Buy spokesman Shane Kitzman, “customers can visit a Best Buy store to return or exchange their Note 7 for a different phone of their choice.” In the meantime, Best Buy has stopped selling the Note 7.

That’s not the only option. Customers can also ask the manufacturer for a refund or exchange, or get a replacement device from their wireless carrier.

Soan’nae Watts upgraded from a Samsung Note 3 to a Note 7 on the day the new phone was released last summer. “I love my Note 7,” she says. But Watts, who works for an educational training company in Atlanta, says she’s worried that the replacement phone she picked up could catch fire, possibly injuring her daughter, who sometimes uses the phone, too.

When Felix Paraon tried to exchange the Note 7 he’d purchased from T-Mobile, he says, the company charged him a “return fee” of $15 and a “customer service” fee of $20. Paraon, who works for a semiconductor company in Carson, Calif., says that while he loves the Note 7, he’s put off by T-Mobile’s fees.

“They told us to return the phone,” he points out.

Still, Paraon plans to keep the new Note 7, which so far hasn’t exhibited any of the behavior of the recalled units.

“I leave it charged all day while playing apps and it doesn’t get as hot as what all these people claim,” he says.

T-Mobile this weekend said it had “temporarily” suspended sales of the Note 7 and that it would issue a $25 credit to users who exchanged their phones. According it its website, it does not charge any restocking or upgrade fees.

What Samsung should do

“Replacements and mea culpas are not sufficient,” says Chip Bell, author of Sprinkles: Creating Awesome Experiences Through Innovative Service. Samsung needs to add a list of other perks by way of an apology. “How about a gift catalog that lets the aggrieved customer pick their own symbolic atonement?” he asks.

Samsung did not respond to questions about the circumstances of its latest recall, its plans to halt manufacturing the Note 7, or any additional compensation it might offer customers who own a Note 7.

“Clearly, Samsung has to provide devices to customers that do not spontaneously combust,” says customer service expert Jay Baer, author of the book Hug Your Haters. “However, since the replacement devices are also now catching fire, telling consumers, ‘Trust us, this third one is perfectly fine,’ stretches the boundaries of believability.”

Instead, Samsung should offer a competitors’ device of equivalent size and functionality. That would go a long way to reassuring fearful customers.

“The goodwill they would gain back from a move like that would be enormous,” Baer says.

There might be some middle ground when it comes to compensation, Baer suggests. Samsung could offer a $600 coupon code for any Samsung-branded device or appliance as a way of saying “we’re sorry.” So far, Samsung’s best offer is a full refund and gift certificate, but that shouldn’t stop an unhappy Note 7 customer from asking.

Christopher Elliott is the founder of Elliott Advocacy, a 501(c)(3) nonprofit organization that empowers consumers to solve their problems and helps those who can't. He's the author of numerous books on consumer advocacy and writes weekly columns for King Features Syndicate, USA Today, Forbes and the Washington Post. He also publishes Elliott Confidential, a critically acclaimed newsletter about customer service. If you have a consumer problem you can't solve, contact him directly through his advocacy website. You can also follow him on Twitter, Facebook, and LinkedIn, or sign up for his daily newsletter. Read more of Christopher's articles here.
53457