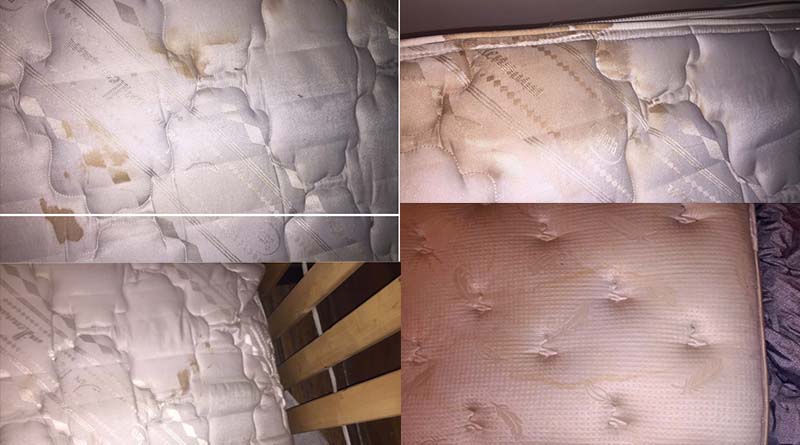 Koji Kawana and his family are looking forward to an exciting five days in New York City. The group has a tight schedule with plenty of activities planned. What they haven’t planned for is the Airbnb nightmare that is about to confront them. Now Kawana wants to know: Where’s his refund for this terrible vacation rental?

Help! We just returned from an Airbnb nightmare and as of yet, we haven’t received a refund for this terrible vacation rental.

Here’s our story. My family and I flew from Los Angeles to New York’s JFK on Easter Sunday. We landed late in the evening. We met the Airbnb host, and he gave us the keys, and we immediately ran out for some dinner.

When we returned, my wife discovered urine and blood staining the bedding in both beds. I have included the photos we took. As you can see, the stains were on both sides of the mattresses. I sent the photos in a text to the host, but he didn’t respond. Since it was already around midnight, we decided to sleep in our clothes that night. My wife refused and rested on the couch.

Around 7 a.m. with very little sleep I texted the host again. I also emailed Airbnb customer service for a resolution. I explained the rental’s problem to the representative. He told me not to move into a hotel and to allow our Airbnb host to remedy the problem. I told him that we had a busy day of sightseeing planned. I just wanted to get this problem fixed.

Then the representative from the Airbnb resolution center told me that he would help me find a new Airbnb rental. He sent me a link to other similar properties. I found another Airbnb apartment and booked the rest of our vacation with the new host. I assumed I would receive a refund for the unacceptable, unsanitary Airbnb rental.

Get me out of my Airbnb nightmare!

Thirty minutes after I booked the new place, the original owner called to apologize. He told me that he had no idea of the condition of the mattresses. He promised to have new mattresses sent over. But the new owner would not allow me to cancel, and I preferred to stay at the new location.

The end resolution is that Airbnb only refunded $750 out of $1,893 for the Airbnb nightmare rental. I find it hard to believe that the host didn’t know about the urine and blood. It is evident that more than one person made the stains because it was several spots on each side. If they even bothered to change the sheets anyone would notice the stains. I submitted a credit card chargeback, but I lost the dispute. I don’t know why.

Can you help me get a refund for this awful vacation rental? Koji Kawana, Los Angeles

Yuck! No one wants to sleep in a bed stained by multiple strangers’ urine — or worse, their blood. And to have paid $1,893 for that experience makes it even more egregious! Your experience is truly an Airbnb nightmare.

When I looked at your photos and read through your paper trail, I wondered what happened here. You followed every step in the Airbnb Resolution Center. And still Airbnb, the owner and your credit card company sided against you.

This case puzzled me. The photos you took showed two mattresses with a variety of dark and light stains. And you had a well-documented paper trail to show your efforts to resolve this problem.

Our advocacy team receives many requests for help when Airbnb rentals go wrong. And in most of these cases, the Airbnb renter has not followed the steps in the resolution center. And so it’s easy to identify the reason for the delay or rejection of the refund.

Recently Andrea Walker  (A stay in a filthy Airbnb rental is just not her thing) almost lost $700 after she neglected to follow the Airbnb resolution process — despite also being an Airbnb host herself. And then there was Jennifer Tudor (No, this isn’t the worst Airbnb we’ve ever seen)  who asserted that she had found the worst Airbnb rental ever. She didn’t. And since she completed almost the entire reservation before making a complaint, Airbnb rejected it.

Most Airbnb complaints can be resolved by using the Airbnb resolution center. Either the host will correct the problem or Airbnb will work to rehouse the guest. But it’s critical to follow the resolution guidelines established by Airbnb.

In fact, the terms and conditions of Airbnb require the guest to give the host an opportunity to correct the problem. If that isn’t possible, you must allow Airbnb the chance to find you alternative arrangements.

You couldn’t sleep through this Airbnb nightmare

You had a lengthy paper trail. As soon as your family discovered the blood and urine stains on the mattresses, you alerted the host and Airbnb.

In fact, the next morning, after you had suffered a mostly sleepless night in this apartment, the Airbnb representative sent you a list of alternative properties. Since the owner had not responded to your texts from the night before, you chose a new property and paid for it. It was only after you packed your bags and got in the taxi and left that the original owner answered you.

Your sleep-deprived family wasn’t inclined to give this owner a chance to replace the filthy mattresses. You told me that you weren’t convinced that he would replace them by the time you returned from your day of exploring. And you just wanted a clean place to sleep for the night. What a novel idea!

You completed your vacation without incident and waited for the full refund from Airbnb. But it never arrived.

Something went wrong in the Airbnb resolution center. That is certain.

The apartment you rented wasn’t inhabitable by any health code standard. And further, you were directed, in writing, by an Airbnb representative to rebook from the list that he sent you. Lastly, your request for a refund was above and beyond reasonable — you agreed to pay for the night that you “slept” in your clothes in the terrible vacation rental. You only requested a refund for the four additional nights that you didn’t sleep there.

I contacted the executive Airbnb resolution team, and they quickly agreed. It’s not clear why the initial representative rejected your claim or why Airbnb challenged your credit card dispute. However, you soon received this Airbnb message:

I wanted to start by apologizing for the way in which your case was handled — this should have conducted to a better outcome and efficiency. Thank you so much for your patience and being cooperative with us. We truly appreciate it.

Secondly, I wanted to make sure you received a full refund for the canceled reservation too. I am personally authorizing the remaining $1,117.60 to be refunded back to you (for a grand total of $1,893.10 instead of the only amount refunded which is $775.50). The situation certainly merits this.

So, in the end, you received a full refund for the entire amount paid for this Airbnb nightmare rental. You shouldn’t have to pay for any nights at an Airbnb property where it’s necessary to sleep fully clothed.