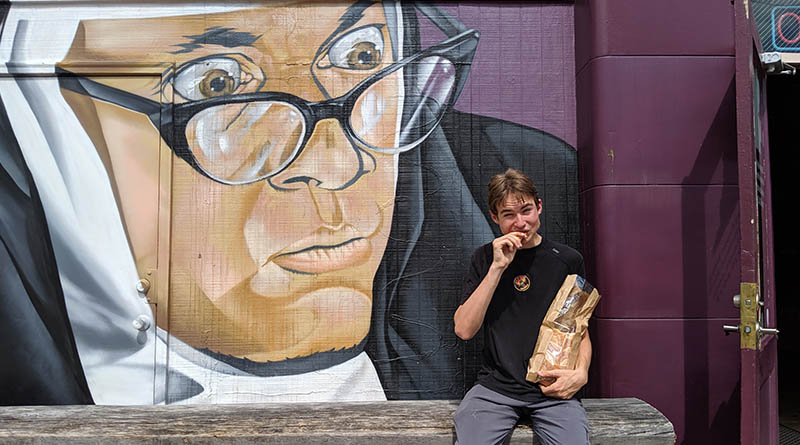 North Carolina’s mountains are always an adventure, whether you’re negotiating hairpin turns in the Appalachians or fleeing a freak hailstorm outside of Asheville.

But there we were, just past Waynesville on what looked like a perfect midsummer day, when the heavens opened and the hail pounded us like antiaircraft fire — Boom! Boom! Boom! — on our Honda’s thin roof. I haven’t seen such schizophrenic weather since we spent a spring in South Dakota.

That’s western North Carolina for you. It’s not everything that it seems and at times a little mercurial. For example, Asheville is much more than architecture and farm-to-table restaurants. And if you only visit antique stores in Highlands, you’ve missed the best part.

Somehow, we made it through the violent storm that blocked the path to Asheville. I don’t know how. It sounded as if our little SUV would come apart in the storm, and my 17-year-old son, who had just gotten his learner’s permit, thought this was the end. But it was just the beginning of our North Carolina mountain adventure.

It turns out that severe thunderstorms aren’t uncommon in the spring and summer, thanks to the warm, humid air from the Gulf of Mexico and the Atlantic Ocean, combined with the position of the mountains. The cloudbursts can be crazy.

Asheville is a fun, quirky town. My daughter joined her aunt for a tour of the Biltmore Estate, a palatial mansion just outside of town that’s now a museum. My sons and I decided to explore the town, which started with a curious discovery: the Black Mountain College Art Museum.

We didn’t know about the now-defunct Black Mountain College, where some of the most innovative artists of the 20th century taught. Nor did I expect to find a small but impressive museum and library that pay tribute to the experimental nature of the college and its faculty.

When you stroll through this town, you get a sense that there are really two Ashevilles — one for tourists and one for everyone else. The visitors like to cluster in the center of town, right near where Biltmore and College avenues cross. With good reason; you’ll find lots of compelling attractions there, including museums and shops.

But take a walk around Asheville and you’ll be rewarded with more, like fun, eclectic neighborhoods and restaurants. My favorite find was the Western North Carolina Farmers Market, just off Interstate 26. It’s a no-nonsense open-air market where you can buy fresh fruit by the peck. (A peck is about three pounds, give or take.) And they don’t have just standard fare like fresh peaches, but exotic apples such as Green Pristines, which you almost never see in grocery stores. They’re best eaten when they’re not quite ripe, according to my oldest son, who spends a fair amount of time obsessing over fresh produce.

I think many farmers markets have been touristified, by which I mean they’ve gone from selling real food to peddling souvenirs and trinkets for visitors. Not this farmers market.

Once you set foot outside Asheville’s designated tourist areas, you might be pleasantly surprised. It’s a southern town with a mountain twist, which makes it intriguing and lures you back again and again. Within a short week, we came to Asheville three times, always to the farmers market but also to different neighborhoods in search of good food or photos. It did not disappoint.

Exploring Highlands and beyond

During most of our North Carolina mountain adventure, we stayed with my uncle near Highlands, a town known for its antique shops and country club. But there’s a lot more to this place. For me, one of the most memorable events was a hike to Whiteside Mountain, a short drive from nearby Cashiers in Nantahala National Forest. It’s a moderately difficult, two-mile loop that takes you along the eastern continental divide, which separates the eastern Atlantic Seaboard watershed from the western Gulf of Mexico watershed.

In a sense, this is where some of the violent storms we encountered are born, where air from the Atlantic and Gulf of Mexico clash. But on the day we visited, it was perfectly — deceptively — calm.

It’s called Whiteside because of the pale, 750-foot cliffs that you see from the top of the mountain, said to be the highest cliffs in eastern North America. At this time of year, the white rock contrasts against the green and yellow foliage of early fall. When we hiked up here, it was every shade of green from chartreuse to shamrock.

Climbing to the summit

It’s worth climbing to the summit, not just for the spectacular views of the continental divide, but also because you might see a peregrine falcon circling in the distance. My 12-year-old daughter also found a lot of insects. I didn’t see them, but I know she did because she screamed whenever she discovered one. The Field Crickets really freaked her out.

And then there’s the fishing. Of course, you’d expect a place like this to have great fishing, and it does. So while your family is shopping for antique lamps in town, which mine was, you can head out to your favorite fishing hole for some peace and quiet. Western North Carolina is known for its trout fishing, with the brown trout, rainbow trout and the native brook trout in abundance.

For all matters relating to fishing, I defer to my younger brother, Dustin. He pulled a record trout out of these waters a few years ago using (I’m not making this up) his bare hands. The enormous fish, which he named after his grandfather, Walter, is stuffed and mounted in my uncle’s living room in Cullowhee.

We had the benefit of my uncle’s pond while we were in town, but I’m told the Chattooga River is an ideal place to fish.

I didn’t want our North Carolina mountain adventure to end, but it did, and too soon. You come here thinking this place is one thing. Then you discover it’s something completely different. That’s western North Carolina for you.