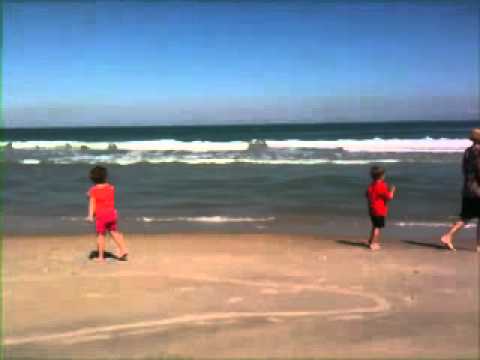 This was supposed to be a post about Mickey’s Not So Scary Halloween Party at Disney World, which we attended on Friday evening. It was great fun, like last year, except that we stayed for the parade.

The kids loved it. We’re grateful to Disney for inviting us.

So why are you watching a 30-second clip of our trip to Canaveral National Seashore yesterday? Well, let me explain.

When we met up with our friend Charles, who works for Disney, just before the party, he mentioned the park’s new ad campaign, Let The Memories Begin. Disney is inviting guests to share their home videos with the world.

• Who doesn’t shoot at least one video while they’re on vacation? But unless there’s an “America’s Funnies Home Videos” moment, these clips are usually stored on the hard drive of your computer. Occasionally, they’re posted online. But they aren’t really recognized in a meaningful way.

• Family vacation videos are about people while they’re traveling, and there’s probably no more effective way of marketing a destination than by showing how much fun a place can be.

• In the early years of online video (2003-2010) there was an overt bias against home videos about destinations (the tinny audio, the bad focus, the shaky image). Destinations wanted professional B-roll with models showing off their resort. But viewers know that’s not authentic. Jerky images, standard definition and bad audio are in, because they’re real.

We’ve been looking for a new project, now that Kari is done with her MBA, and we think Disney is on to something. In fact, we think this would make a great business.

Since late 2008, we’ve been posting our own vacation videos on Souvenirist.com. It’s been moderately successful, but now, inspired by Disney, we think the time has come to expand its scope and sharpen its focus. We think Souvenirst might make a great site for featuring your vacation videos.

So here’s what I’m wondering: Would you visit a site that highlighted the funniest, most entertaining, most poignant family vacation videos? Would you participate in a site that gave you tips for creating vacation videos with the technology you already have (a cell phone, a PC and an Internet connection)?

(By the way, the video at the top of the page was shot Saturday at Canaveral National Seashore, which is just a stone’s throw from Cape Canaveral, Florida. It has developed something of a reputation for its clothing-optional visitors, a fact I learned only after our visit, when I notice a preponderance of signs that urged beachgoes to remain clothed at all times. The beach was practically abandoned, since tourist season is long over.)