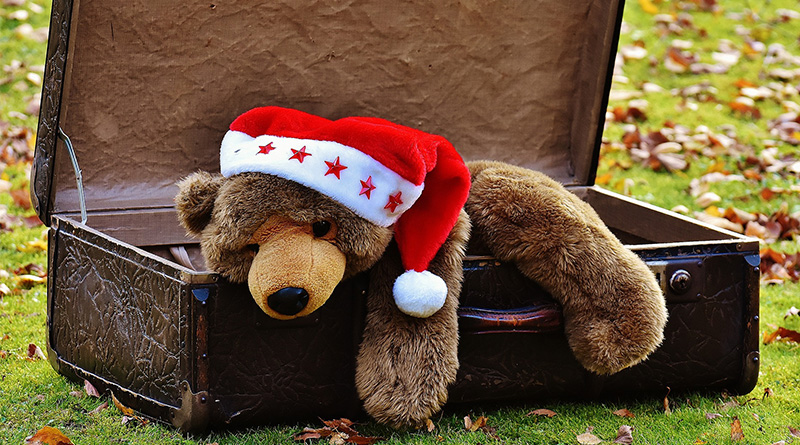 It’s the season of the squeeze.

That should require absolutely no explanation, but just in case: Picture thousands of stressed-out holiday travelers in airport terminals, train stations and bus terminals, bundled up in winter clothing, all piling into a claustrophobia-inducing cattle-class cabin.

Is your blood pressure rising yet? Mine, too.

“The worst offenders are people who abuse the carry-on luggage limit and take up more space than they are supposed to get,” says Raymond Lee, a finance director for a consumer goods company in New York and a frequent traveler. “They are also the ones who will put their luggage sideways and take up more space for no reason other than they just don’t care to do it right.”

But don’t take his word for it. Simply board a flight, grab a seat and watch. Chances are, you’ll see a fellow passenger try to wedge a too-large carry-on into an overhead bin, or a thoughtless passenger with a backpack whacking another traveler, or two people bickering over the space under their seats. It’s chaos.

What better time to brush up on your luggage etiquette and learn a defensive maneuver or two?

It starts with what you bring. “Consumers are looking for the most possible space and lightest-weight case possible,” says Scott Niekelski, a direct import manager at the National Luggage Dealers Association, a luggage distributor.

That may be the wrong impulse. When it comes to proper luggage etiquette — less is more. The most experienced passengers travel light. Some don’t bring any luggage.

“I ship my gear ahead to my destination, especially if I plan to be in one place for an extended period,” says Brian Teeter, the Irvine, Calif., author of the “Healthy Trekking Travel Guides” series. “That way, I can travel light and have my main luggage waiting when I arrive.”

Having no luggage is probably the only way to ensure you’ll never fight about it. But let’s be realistic: Most of us travel with at least a backpack, purse or some other kind of carry-on.

On planes, carry-on luggage is a never-ending irritant. Airlines are partly to blame, since checked luggage fees incentivize passengers to carry most of their belongings with them. Protocol experts say the key to avoiding scraps over luggage is packing light and moving fast. Downsize to a smaller carry-on, like a 22-inch rollaboard or a backpack, and place it in the bin above your seat — not someone else’s (that’s called bin-hogging, and it will almost certainly annoy the passengers below).

Speed matters. Don’t overstuff your bag to the point where you have to wrestle it into the compartment. “Stow carry-on luggage quickly in the overhead bin so other passengers may pass in the aisle,” says Rachel Wagner, a corporate etiquette consultant in Tulsa. “If you need extra time to stow it, step into the seat area for a moment so others may pass by, then step back into the aisle when there’s a short break in the aisle.”

No one likes a blocker, and that’s true at the luggage carousel, as well. Consider the mad dash for the best position. For some reason, passengers feel they own the spot immediately next to the conveyor belt, and they refuse to give it up for anyone, even if those people see their luggage and want to collect it.

“Don’t hover around the baggage carousel,” says photographer Gary Arndt, who travels constantly for work. “You block everyone else when their bag arrives. Stand at least several steps back from the carousel, and only step forward when your bag is actually coming past.”

Backpacks are another source of pain for travelers, and that’s true not only on planes but also buses, trains or any mode of transportation with narrow corridors. The problem? During boarding and deplaning, it’s easy to turn quickly and unwittingly hit fellow passengers with them.

“Take bags off of your shoulder, especially backpacks, before walking down the plane aisle,” says Sarah Howell, a corporate trainer and frequent business traveler based in Austin. “I can’t tell you how many times I’ve been whacked in the face by someone carrying the contents of their entire life on their shoulder, with them none the wiser.”

A special note about kids: Parents, if you can avoid taking a stroller, do. Strollers are clunky and they’re easily damaged when you gate-check them. Or, to put it into luggage terms, your baby makes a better carry-on than a rollaboard. Also monitor older kids with luggage.

“Don’t let children wheel their own suitcases through the airport,” says Evie Granville, a writer from Houston who hosts a lifestyle podcast that often deals with etiquette issues. “Instead, pack a backpack for them to carry.”

I concur. My 12-year-old son thinks his wheeled luggage is a go-cart. After a long flight to Anchorage this summer, he had a chance to realize that dream. There’s an area between the main concourse and the car rental terminal that slopes down and, without warning, he threw himself down the incline with the enthusiasm of an Olympic bobsledder. He nearly collided with a passenger. Needless to say, he’s using the backpack next time we hit the road.

The passenger at the bottom of the ramp taught us a valuable lesson about survival. Even though he looked as if he had endured a marathon flight to Alaska, as well, he remained alert and stepped out of my son’s way.

Luggage etiquette is only a partial solution to the seasonal squeeze. You have to also play defense . Watch out for the backpacks, the passengers with the overstuffed bags, the moms and dads with strollers and, yes, the tweens with wheeled luggage. Don’t assume they have the same good manners you do, and don’t be surprised if you have to dodge speeding carry-ons.