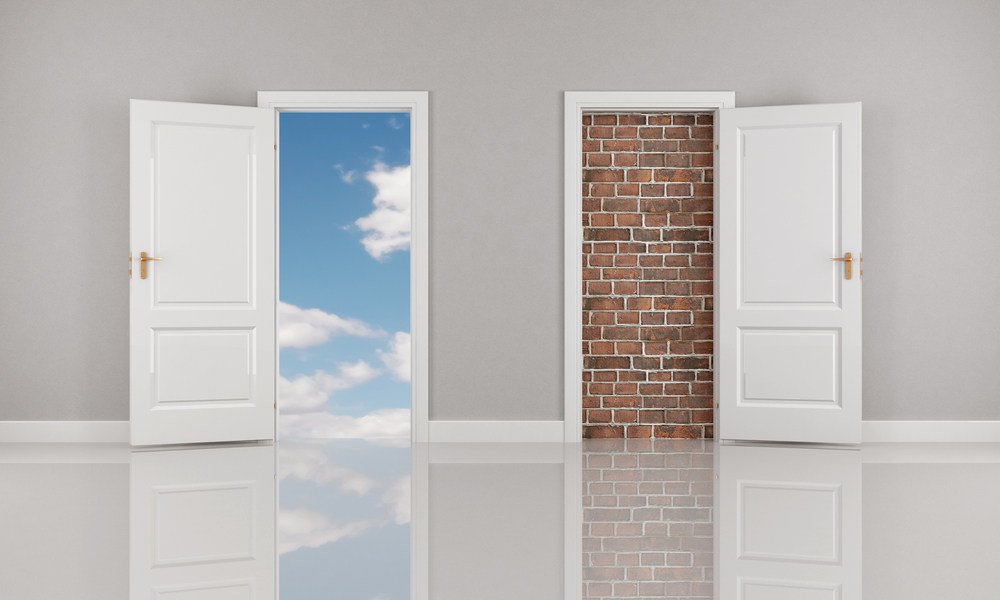 Last month, two pivotal things happened to this site that you might not be aware of. Two opportunities have presented themselves as a result.

But which door should we walk through together? I need your help deciding.

The first was a fundraiser that blew away everyone’s expectations. We recruited dozens of volunteers and raised more than $10,000 for the cause of consumer advocacy within a few short weeks.

I’m speechless at the response from readers, supporters and corporate underwriters. You really care.

The second development: joining BoardingArea, a blog network that specializes in loyalty programs.

You can see the results now.

• The banner above the top, which links to the other member sites.

• The ads, most of which are for mileage-earning credit cards.

• The numerous mentions — some positive, some not — from other loyalty program bloggers about this site’s participation in the network.

Although BoardingArea didn’t pay for the site redesign — you did — our new network friends helped us configure our forums and assisted with setting up the new contacts database. I’m grateful to Randy Petersen and his IT team for their help.

So what’s the problem?

I’m being pulled in two different directions. There are two paths I can take in 2015.

Door #1: Become an airline and loyalty program advocate
I’m being drawn deeper into loyalty and airline advocacy. This makes sense, economically. I can earn a living wage from the credit card ads already running on the site. Who knows, I might even be able to pick up an affiliate agreement with a credit card company, which would allow me to start collecting a commission from sign-ups. Besides, there are plenty of frequent fliers who need someone to help them read the fine print and retrieve those missing points and miles. That’s a full-time job.

Door #2: Become a general consumer advocate
Many of you see me as more than an advocate for airline passengers. More, even, than an advocate for travelers. You’ve told me you want me to help all consumers. You’re willing to write checks to make that happen. You didn’t mind the Google ads that appeared on this site before October, but you find the new credit card pitches to be disingenuous, if not dangerous. After all, I’ve spent the last two decades criticizing loyalty programs and now my site has become a billboard for them. I hear you. If I do what I think you want me to, it would profoundly reshape my career as well, taking me out of the travel industry’s orbit. It would also be an expensive step with no guaranteed income of any kind waiting behind the door.

These aren’t easy decisions, and I’m not making them lightly. Take the money and be an advocate for a few consumers or take a leap of faith and help everyone.

What should we do?

Update (Dec. 1): Thank you for your feedback. I hear you, loud and clear. Starting in 2015, this site will broaden its focus to general consumer advocacy topics. We’ll continue to fight for the 99 percent of travelers who need an advocate, as we have in the past, but we’ll also be there for all consumers who are wronged and need help. Many of you also said you strongly prefer this to be a member-supported, ad-free site. I share your goal. I’ll do everything I can to make that happen.