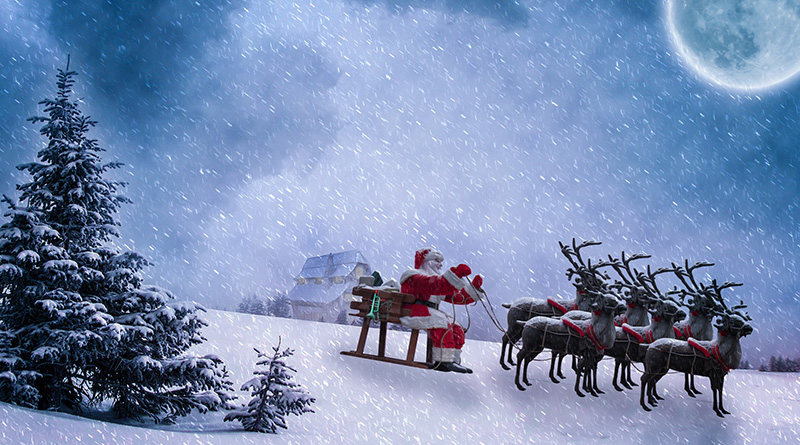 Yes, Jeff, there is a Santa Claus.

And Macy’s can prove it.

We see all sorts of consumer complaints here, but Jeff Loiselle’s recent request is a first. He contacted us and asked us to help him get a Macy’s ad pulled. Why? Because he thinks the ad campaign is “awful” and has caused his three-year-old to — gasp — ask him if Santa Claus is real.

An ad campaign that encourages little children to question Santa’s existence? Of course, we were as outraged as Loiselle. So, we raced to the internet to see this irreverent commercial.

Questioning Santa’s existence is nothing new. In fact, the most public questioning of Santa’s actuality was in 1897 when eight-year-old Virginia O’Hanlon, discouraged by her friends’ insistence that Santa was not real, wrote a letter to The New York Sun. Her father told her that if she saw something written in the New York Sun, that would prove its truth. So, she asked the very question: “Is there a Santa Claus?”

What resulted was a beautifully written published response from the editor: “Yes, Virginia, there is a Santa Claus.”

The editor explained to Virginia that her little friends have been “affected by the skepticism of a skeptical age. They do not believe what they do not see.”

I would suggest that with the internet inundating our lives, the skeptical age has exploded.

For his part, Santa has never publicly attempted to prove his reality. Presumably, he is much too busy running his affairs in the North Pole to fight against this “Santa Does Not Exist” propaganda. And the fact that he has always maintained that children must be asleep “all snug in their beds” when he arrives also bolsters his mystery.

On a practical level, this policy makes a lot of sense. You can only imagine how long his Christmas Eve route would take if he needed to stop and make a little idle chitchat with each family. That problem is easily solved if everyone is sleeping.

Now, back to Loiselle’s concerns about the Macy’s ads. The ad campaign is called: #SantaProject: Our Movement to Keep the Magic of Santa Claus Alive. I watched the ads and did not agree with Loiselle’s negative perception of the campaign. While it does acknowledge that children are being exposed to information on the internet, and elsewhere, that Santa doesn’t exist, the goal of the campaign is to prove that he does exist.

The commercial starts out with children of various ages and ethnicities explaining who Santa is and what they love about him. Later in the commercial, they express concerns about the things that they have seen on the internet telling them that Santa doesn’t exist. They show one child typing “Does Santa exist?” into his phone.

Other children complain of fake videos they have seen on the internet that say Santa is pretend. And one little girl tells us that she heard “about 1,000” people who said he isn’t real. All this negativity does not seem to sway the children’s beliefs, but they do appear to feel bad for Santa that he has to endure this cynicism.

Macy’s has a solution to all this negativity on the internet concerning Santa’s existence. The commercial states, “Macy’s Believes.” It suggests that the internet be flooded with stories, pictures, tweets, videos that confirm a belief in Santa. The idea is that when children do an internet search for “Does Santa Exist?” they will encounter all of the information that is hashtagged #SantaProject.

The commercial ends with the children happily giving clear evidence that Santa exists by explaining that on Christmas morning the cookies that were left in the kitchen for Santa are eaten and that the milk carton is empty. Who can argue with these facts?

A current Google search of #SantaProject reveals thousands of submissions on a variety of social media platforms.

Naturally, there will be many who say that children should not be on the internet unsupervised at an age when they would be asking such a question as “Does Santa Exist?” But, the ad campaign can be used with parental guidance to help reinforce your family’s holiday traditions that involve Santa.

Loiselle took to our forums to elaborate his complaint. He said his daughter didn’t really understand the commercial and, at the conclusion, her take was that the kids were saying that “Santa isn’t real.”

She misunderstood the message.

But a three-year-old misunderstanding a message certainly is not uncommon. That’s why children have parents to help guide them and correct misunderstandings at this age, especially while watching TV. Loiselle says he “used some quick thinking” and handled his daughter’s question, but was angry at Macy’s for putting him in that position.

As a parent myself, I feel for Loiselle. But I also know that this will not be the last time that his child asks him an unexpected or startling question that will need quick parental explanation. It’s par for the course in parenting.

The concept of Macy’s ad is heartwarming and the premise is sweet and innocent. Macy’s believes. Not just in Santa, but in the spirit of the holidays and magic of the season. Macy’s wants children to see positive Santa-related stories on the internet. How can that be wrong?

We can’t join Loiselle on his quest to shut down this campaign, but we wish him and you a very happy holiday season!

Fortunately, there are no more “fake” Santa ads this year, but this was a worthy discussion when we had it a few months ago, and especially important if you have young, impressionable kids.