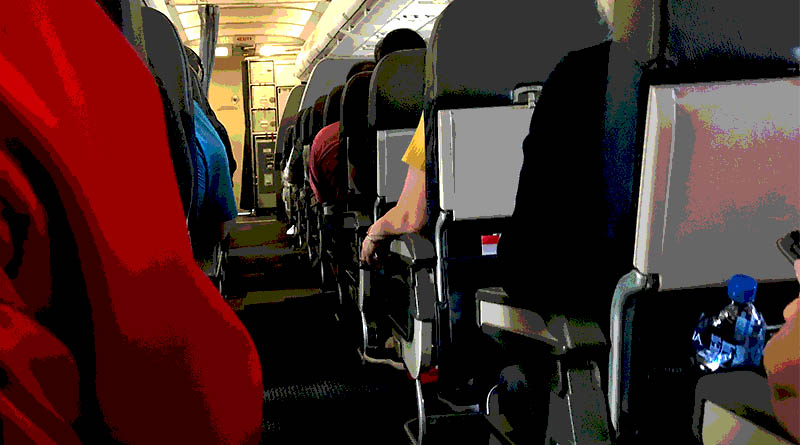 On a recent flight, Jetblue forced Samuel Cristol to share his seat — the whole way across the country.

That’s correct, Cristol had a partial seatmate — a man who did not quite fit in his own seat. And although the guy seemed pleasant enough, Cristol did not want to share his seat. Now he wants JetBlue to compensate him.

Cristol’s story is one that points to the importance of self-advocacy. If an airline presents you with an unreasonable situation, it’s critical to clearly voice your refusal — immediately. And politely. Otherwise, your complaint after-the-fact may not have the intended impact.

He didn’t want to share his seat with a stranger

“I was on a six-hour flight,” Cristol recalled. “As I got to my seat, I noticed a very large man in my seat. I politely told him that was my seat. He moved over as best as he could but was still half in my seat.”

Cristol then recounted a very unpleasant cross-country journey. And he included multiple photos of his experience. He didn’t want to share his seat, but he says JetBlue forced the situation onto him.

He acknowledged that the large man in the middle seat did his best to remain there. But…

“I’m 73 years old. He was sitting on half of my seat,” Cristol explained. “I spoke to the attendant, but there wasn’t anything he could do. The flight was full. This guy could be a lineman for a major team.”

If you are ever faced with any seatmate problems, it’s critical to alert a flight attendant before the flight leaves the ground. There is very little that can be done 30,000 feet in the air if that’s the time you decide to lodge your complaint.

Before I had children, I had my own seat-sharing experience. I was traveling alone from New York to Paris in business class. A man boarded the flight with his “lap child” who appeared to be around five years old.

The duo sat down beside me, and the little girl made herself comfortable on the shared console between our seats. She was a friendly little girl. And she was very excited to be traveling to Paris. As the flight was boarding, we had a long conversation about all the things she planned to do there.

But I didn’t want to spend the next eight hours with her at my arm. I wanted to sleep or watch a movie. I asked the flight attendant about the situation. She took a quick look at the manifest and realized that the man had booked his small child’s seat in economy — alone. He booked himself in business class.

I felt slightly guilty as the man was forced to take a seat in economy with his child. But as a mom now myself, I’m not sure what he was thinking. A parent’s place is by their minor child’s side while traveling. And she was far too old to sit on his lap — or on our shared console.

All of this was taken care of before the plane took off. On the ground. That’s the place where the airline has the opportunity to correct these seatmate problems.

Airline seats are getting smaller

Unfortunately, the problem of seat encroachment on flights is getting worse. The airline seats are shrinking, but the average U.S. passenger is getting larger. This is an equation that can result in only one thing — angry, uncomfortable travelers. Whether you are a person of a larger or smaller size, you will likely be affected.

The airline industry is ignoring an undeniable fact — a portion of their customers do not fit comfortably in their seats. Some don’t fit in the airline seats at all. And this problem can affect every traveler.

Our publisher Christopher Elliott has also weighed in on the issue (Why the government thinks shrinking your airline seat is just fine).

We have a problem here. So it’s important for passengers of all shapes and sizes to voice their objections about these shrinking seats to the Department of Transportation.

This situation is the plight of us all. Big or small — short or tall.

Fortunately, lawmakers are making moves to force airlines to stop squeezing us into smaller and smaller seats.

I contacted JetBlue about Cristol’s complaint that he was forced to share his seat. I edited some of the photos to conceal the identity of his seatmate. But the photos still showed that this gentleman was not contained in his own seat. Cristol was undoubtedly sharing his seat space with this man.

Hi Michelle, Our Customer Support has reviewed your reader’s comment and our past engagement with him regarding his experience. We understand this is a sensitive issue and we try to make each customer as comfortable as possible in order to provide the best flying experience, and we regret that there may not have been another available seat to move to. While we aren’t able to honor the request for a full refund for the value of the flight as a gesture of apology, we issued both customers a $100 JetBlue credit in hopes their experience next time is more enjoyable.

Unfortunately, this is the final answer from JetBlue. Both passengers had an uncomfortable and unpleasant flight. The value of their tough 6-hour journey is $100 each in a future travel voucher according to JetBlue.