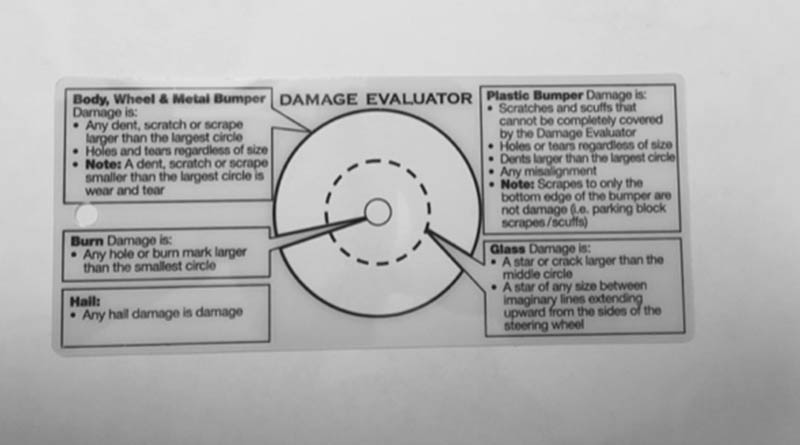 I asked Roger Van Horn, Enterprise’s vice president for corporate loss control, what was behind the decline. Van Horn has gone on the record before to defend the huge volume of loss claims. I expected him to tell me they’d stopped pursuing as many cases, but I was wrong.

Before I go any further, a few disclaimers: My perspective on damage claims is distorted by the crush of complaints I receive from readers like you. It pains me to hear about a frivolous $495 claim for a few dings and dents. Like you, when I see enough of them, I smell a scam.

An Enterprise scam or are consumers damaging those cars?

At the same time, I believe that when you damage a car, you should pay for the repair. Van Horn and I can agree on that. Where we can’t agree — and probably never will — are the so-called “junk” fees for loss of use, diminished value and administration that often accompany these claims. I feel they should be baked into the cost of doing business; Van Horn and Enterprise want to separate them.

Several years ago, after acquiring Alamo and National, the rental companies had “different standards” for evaluating damage to a vehicle, he says. This created unexpected problems. For example, a franchisee in Los Angeles would have no problem with a small ding, but another location in, say, Phoenix, might rush to repair the blemish. When cars were transferred between locations, that would lead to finger-pointing, and inter-franchise warfare. You get the idea.

At the same time, customers were confused about what constituted damage to a car. Representative A in Atlanta would say the car was fine and that “anything smaller than a golf ball” was acceptable. Representative B at the same Atlanta location would disagree and write up the damage when the car was returned, even though the customer had been given a green-light previously. That kind of inconsistency can get you into trouble with your consumers, and it did.

The Damage Evaluator determines if you damaged a rental

The solution: The Damage Evaluator (see above).

Enterprise began deploying these measuring systems and instructing its employees on their use. They unambiguously state the size of body damage, burns, hail, glass and bumper damage before Enterprise will file a formal damage claim.

And that, my friends, is why the Enterprise complaints are on a downward slope. They finally defined important terms like “damage” and “wear and tear.”

I think there’s a sense that they’ve managed to eliminate many, if not most, of the frivolous claims, thanks to training employees to use the Damage Evaluator. But how do you eliminate the rest?

First, it may be a good idea to circulate these Damage Evaluators to customers. Specifically, in the envelope of their rental agreement. Why would you share this only with employees? Travelers need to know what is and isn’t damage, too.

Take before and after photos

Beyond that, the only way I know is to take “before” and “after” pictures of the car. And I really don’t think that’s an unreasonable request. Car rental companies already send its employees into the parking lot with a fancy handheld device that helps them note mileage and print a bill — why can’t it also be used to take pictures of the car?

It seems to me that the only reason for not taking pictures of a car is so that the absence of photographic evidence means the car rental company automatically wins. The car is damaged because we say so, and if you can’t show us time-stamped “before” and “after” pics, you have to pay.

The Damage Evaluator is a great start, but more needs to be done. Enterprise’s cars — indeed, all rental cars — are ready for their close up.

Take the picture. Get a customer to sign off on it. Every damage claim will be quick and painless.

And make sure to check out my ultimate guide to renting a car so you can avoid getting dinged during your next car rental.