So what exactly is the problem here?

This case highlights a frustrating trail you might be headed down if you have an airline credit stored somewhere. Travelers beware: Flight credit expiration dates and rules vary. So it’s up to you to correctly decipher the often confusing language in the terms and conditions of yours. Otherwise, you might be in for an unpleasant surprise later.

And don’t forget — if you use a third party-booking agent, you’ll be adding another layer of confusion to the mix.

A canceled trip leads to a $3,962 United Airlines flight credit

Unfortunately, a few weeks before their flight, a lightning strike caused a devastating wildfire near Lake McDonald in the park. 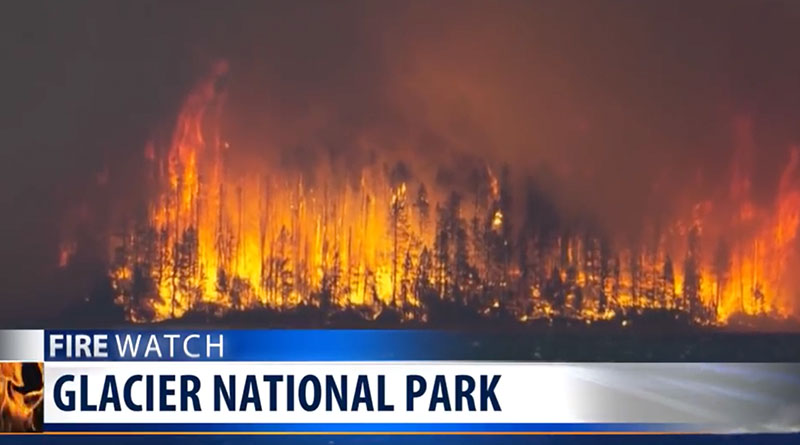 Over the next several weeks, the fire grew in intensity and the National Park Service closed much of Glacier to tourists.

After news reports showed tourists trying to escape from the wildfires in Glacier, Poleshuck called Expedia. He knew it was time to reschedule this much-anticipated trip.

“Expedia gave us a United Airlines flight credit for our canceled itinerary to Montana,” Poleshuck recalled. He noted that the voucher indicated a May 12, 2019, expiration date for the flight credit. The family filed the information away and planned to book the following summer’s vacation using the banked $3,962.

If only it were that easy.

Why can’t I use my United Airlines flight credit for next summer?

In March, Poleshuck’s thoughts turned back to that United Airlines flight credit. He knew that it would expire in May, so the family needed to use it fairly soon. They decided to take a trip to the Caribbean. After doing the initial research, Poleshuck picked the flights the group would take for their tropical vacation in June. And then he picked up the phone to call Expedia and book his selected itinerary.

Poleshuck says that was the moment his excruciating struggle to spend their United Airlines flight credit began. He assumed the process would be relatively easy — pick available flights and apply the voucher. It turned out to be anything but easy.

In fact, Poleshuck hit a barrier to his new vacation that proved impossible to navigate.

The flight vouchers were issued by Expedia for United Airlines. It stated that we could go to their website, find a United flight and then call them. But we spent over 3-1/2 hours being hung up on (supposedly transferred). An Expedia representative admonished me for not staying on the line (I waited patiently). I waited for a second level supervisor for almost 45 minutes.

At one point Expedia even transferred me to United Airlines. That customer service individual stated that we had to book through Expedia. That made sense since that is what the Expedia voucher said. But Expedia just kept transferring our call to other Expedia personnel. That meant having the line go dead after a long wait.

Seeing no end in sight to the pointless go-rounds with various Expedia and United representatives, Poleshuck turned to the Elliott Advocacy team.

When I read through Poleshuck’s plea for help using his United Airlines flight credit, I reviewed his Expedia voucher. It clearly stated that he must contact Expedia by May 12 to use the credit balance. That was the one-year anniversary of the family’s original booking date for their flights to Montana.

I suspected that United Airlines must have adopted the “fly-by” expiration date policy. So I started reading through United’s contract of carriage and I found Rule 7, Ticket Validity:

United Airlines makes it clear in Rule 7 that the traveler must book the new flight within one year of the original ticket purchase. But it does not clarify if the customer must complete the new flight by that date.

Conversely, the language in American Airlines contract of carriage makes it clear that all travel must be completed within one year from the date of the original flight:

I have a nonrefundable ticket; can I use it for future travel?

Depending on fare rules, you can apply the unused value of your American Airlines ticket toward a future trip as long as:

Since United’s contract of carriage didn’t provide the clarification needed and Poleshuck had been prevented from booking flights in June, I sent a request over to United Airlines. I asked if the expiration date of United Airlines flight credit is a “book-by” date or a “fly-by” date. It seems like a straightforward question, but several weeks later I’m still waiting for an answer.

Poleshuck was understandably agitated by the situation. With almost $4,000 in United Airlines flight credit, neither Expedia nor the airline could help him use it.

Poleshuck’s Expedia voucher notes the airline credit expires on May 12. But it gives the impression that he can book a new flight right up to May 12. Regardless of whether United Airlines has a “fly-by” or “book-by” date, I thought Expedia should honor the voucher as written.

The executive resolution team at Expedia is always willing to delve into the problems of the consumers who contact our team. So I reached out to Expedia with Poleshuck’s dilemma. I shared what I suspected was the problem that was preventing him from booking flights for June using the United Airlines flight credit.

There was soon good news for Poleshuck and his family. They will be traveling to the Caribbean on their chosen dates using their United Airlines flight credit after all.

As a rule of thumb, Expedia encourages customers to ensure they review and understand all language associated with credits, including details such as “book by date,” “expires by date” and “travel by date.” In this particular case, the rules and restrictions of the voucher were provided by the airline, not Expedia. We were happy to work with our provider to come to a satisfactory resolution and ensure we could book our customer on their flight of choice.  The customer is our #1 priority.

Poleshuck is pleased with the end result. But he suggests that both United Airlines and Expedia should be more transparent with the terms and expiration dates of these flight credits. And after researching this article, I agree.

When do flight credits expire on the major airlines?

*This article was originally published in April 2019. It was checked for accuracy in July 2020. It is important to note that these are the standard policies. During the coronavirus pandemic, the airlines have adopted temporary policies that extend flight credit expiration dates. Please see the following article for more information:  Coronavirus fears: What you need to know about canceling your vacation.