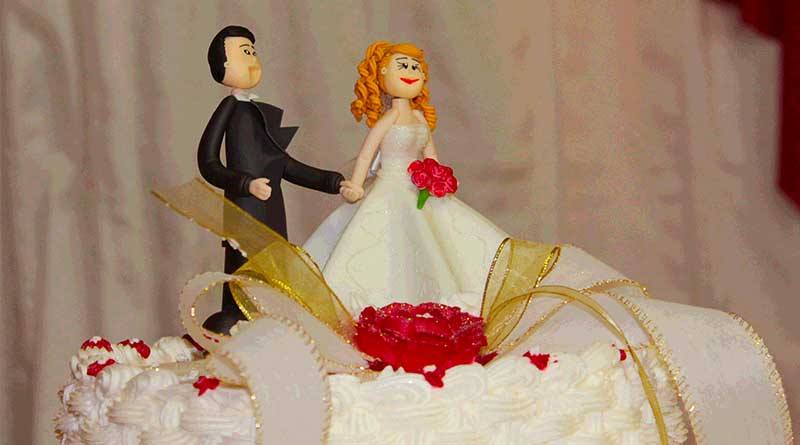 Wondering what you can bring on the plane for an upcoming trip? I recently discovered a quick and often funny way to Ask TSA what you can — and can’t — bring through security during your next airport adventure.

If you think you hate the Transportation Security Administration, read on. You just might come out on the other side of this story with a slightly more humanized view of this government organization.

Bring a cake on the plane? How can a passenger ask TSA?

Judy Harkess is a thoughtful matriarch. She has been carefully storing her son and daughter-in-law’s wedding cake topper throughout the past year. Now, as tradition dictates, it’s time to defrost that confection and celebrate the couple’s one year anniversary.

But there’s a problem. Harkess and the cake are located in the state of Washington. But the couple lives in Florida.

“My mission is to get their wedding cake topper to them for their first anniversary,” Harkess explained. “How can ask TSA if it will allow me to bring the cake on the plane?”

Having read an awful story about a birthday-cake-carrying family being kicked off of a JetBlue flight, Harkess was understandably worried about the feasibility of her plan.

In that incident, the family had successfully gotten the cake through security. However, the situation escalated after a JetBlue flight attendant objected to the birthday girl putting the bakery item in the overhead compartment. According to witnesses, words were exchanged, and soon the Port Authority police arrived. The family’s birthday plans were abruptly changed. Instead of Las Vegas they, and the cake, ended up back home in New Jersey. The entire fiasco was a decidedly disappointing way to spend a birthday.

Will this cake be allowed through security?

Hoping to avoid any similar problems, Harkess researched her options.

“I looked into shipping it frozen overnight but there was no way to guarantee it would arrive safely,” Harkess explained. “And the price was as much as a plane ticket!”

Rejecting that idea, Harkess visited the TSA website and hoped to get an assurance that she could bring the cake on the plane. Finding no specific information that calmed her fears, she called Alaska Airlines.

“I am not sure TSA will allow it,” Harkess lamented, “They told me it would all depend on the guy at the X-ray machine as there is no firm rule on every type of cake.”

In turmoil over her quandary, Harkess then turned to the helpline at Elliott Advocacy hoping for a definitive answer.

When I received the plea for help from Harkess, I wasn’t sure how to approach the case. Bringing a cake on a plane seems like a messy affair. We’ve all seen the items on the conveyor belt in the TSA security line being tossed and turned. It’s not a gentle process — things fall off, other passengers pick up the wrong items or push other passengers’ belongings out of the way.

Then even if the cake successfully made it through that leg of the journey, what about on the flight? With onboard storage space a precious commodity, passengers are often seen defying all laws of spatial awareness — shoving items into any available space.

How could a cake survive all that tousling and still resemble a tasty treat?

Although I was distracted by the logistics of bringing a frosted cake on a plane across the country, I realized that wasn’t the question at hand. Harkess was committed to getting this cake to Florida one way or another. She just needed to know if TSA and Alaska Airlines would allow her to do it. So I set to work at finding her an answer.

I reviewed all the information on the TSA website about what can and can’t be carried through security. Likely, because of the incident with the family on JetBlue, the question of cakes on planes seems to be a popular one.

The answer from TSA is “Yes, but…”

The final decision rests with the TSA officer on whether an item is allowed through the checkpoint.

And that’s the fine print that made Harkess uneasy about attempting this cake-delivery operation.

“I want to be able to carry the cake on the plane with confidence that I will not be asked to throw it away at the TSA inspection line,” Harkess explained. “Do you know of any way to get special approval from TSA?

As a nonprofit consumer advocacy organization, we get many inquiries that involve the TSA. Typically, these are complaints from passengers who believe the TSA mistreated them during their travels

In most cases, I recommend writing a polite email to the using our TSA contacts. And in worse case scenarios, a passenger can escalate a complaint to the Department of Homeland Security’s Traveler Redress Inquiry Program (DHS-TRIP). However, since I know from experience that it can take weeks or even months to get an official response, I knew this would not be useful to Harkess’ plight. I needed to find a more expeditious route to a real person at the TSA.

And soon I found the answer.

As I was researching a better way to reach someone with clout at the TSA, I found Ask TSA.

We’re the magic 8-ball of travel. While we can’t see into the future, it’s magical how fast you’ll get an answer. Did you know TSA is available 365 days a year to answer any questions about security-related travel? We can help…if you forgot your ID, lost something at security or want to know what you can bring on a plane! Just send us a photo and we’ll let you know!

Impressive! If true, Harkess would soon have an answer to the question that had been troubling her for weeks. I sent the information over to Harkess and hoped that Ask TSA was truly all it claimed to be.

But then we hit another problem. Harkess does not do social media. And it would appear that Ask TSA is conducted entirely through social media accounts. This could be a stumbling block to many passengers who aren’t computer savvy or social media mavens.

Never fear though — I do have a social media account. Harkess sent me a snapshot of the cake topper posed against a ruler for scale. I uploaded the picture to Ask TSA through my Facebook messenger and then I waited for that Magic 8-ball answer.

And voila! A few hours later, I had good news for Harkess. The cake topper is cleared for takeoff!

We’re glad you asked, Michelle. Solid foods, including this round cake topper, is allowed through security checkpoint. Please send our happy anniversary wishes to the lovely couple — Polly

Although we mostly receive complaints and hear bad press about the TSA, a quick scroll through its Instagram account will give you a different glimpse of the organization. This account is funny, sometimes serious and will give you a peek into some of the wacky things travelers try to take through security on a daily basis.

The TSA’s Instagram account is run by Bob Burns. He is the TSA’s social media publicist and he has a great sense of humor. Burns recently explained to NBC news that although the site is meant to be “cheeky,” its primary purpose is to educate passengers and to give useful travel information.

Here are a few recently confiscated items posted to TSA’s Instagram account. It’s hard to imagine the thought process behind a traveler who tries to bring a chainsaw on board an aircraft.

Or a live crab:

The TSA Instagram account often highlights some of the rejected items that are uploaded to Ask TSA as well. Here is a cake, that unlike Harkess’, was rejected for travel because of its many un-cake like qualities: 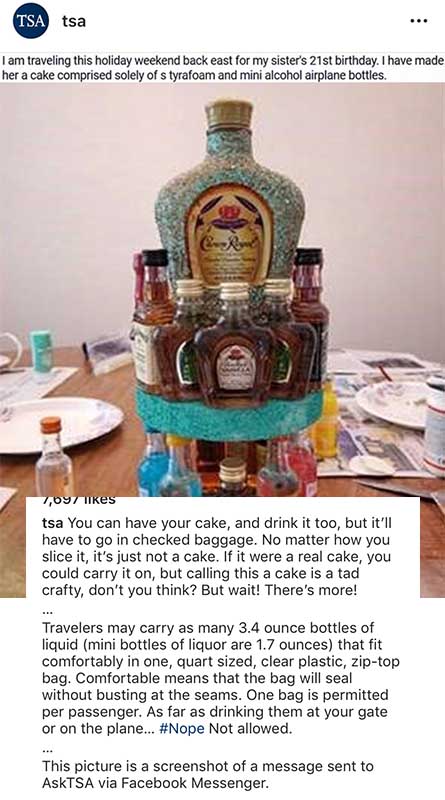 Nice try… But I agree, that’s not really a cake.

For Harkess, the Ask TSA news was a giant relief. She is pleased that she’ll be able to bring that cake topper to her son and daughter-in-law for the happy celebration.

I wish her luck — since approval to carry that cake on the plane is only one step in the success of her self-described “mission.” She plans to put the cake in a clear box and keep it under the seat in front of her.  I look forward to hearing from her once this is a “mission accomplished.”

Editor’s note: Sadly, since we first published this article, Bob Burns, the creative mastermind behind Ask TSA has died. You can read the TSA’s tribute to him here.