Home » Advice » His hotel refund was approved. So why did he do this?

Phil Huffman says he had a hotel refund coming his way for his stay at the Holiday Inn San Antonio-Downtown on Market Square. It just wasn’t coming fast enough.

You’ll never believe what he did next.

Then again, if you’re a longtime reader of this site, maybe you will believe it.

Huffman’s case involves Hotwire, my long-suffering team of consumer advocates, a credit card chargeback, and an unnecessary threat of litigation. But it’s also a textbook example of how not to handle a hotel refund request — especially a goodwill refund from a company that rarely offers refunds.

Why Hotwire promised him a hotel refund

Hoffman had booked the hotel room, but then learned he would have to have surgery.

Hotwire’s hotel rooms are nonrefundable for a reason:

For all Hotwire Hot Rates, bookings are final and cannot be cancelled, refunded, exchanged, transferred, or changed, even for a fee.

Hotel suppliers are able to offer their unsold rooms at discounted rates on Hotwire because we withhold their name until after the customer books and our reservations are non-refundable. These restrictions enable the hotels to better manage their unsold rooms, and are a big reason why we can offer you great deals.

It’s unclear if Huffman was fully aware of Hotwire’s strict refund policy before he made his reservation or if he knew he might need surgery. If he’d had an inkling that he might need medical treatment and that Hotwire wouldn’t refund his room, he might have chosen a site with a more flexible booking policy (but more expensive rooms).

Huffman described his condition as “emergency surgery on a broken ankle,” and he provided documentation of the procedure.

Then again, it’s possible that Huffman knew about the no-refunds policy and was fully aware that he might need surgery. Maybe he planned to use his medical condition to persuade Hotwire to bend its rules.

Either way, that’s what happened. Huffman made the reservation and then contacted Hotwire to ask for a $364 refund.

The official word about hotel refunds from Hotwire

Hotwire is crystal clear about refund requests: Hot Rate hotel bookings “are final,” it says on its page about hotel itinerary changes. 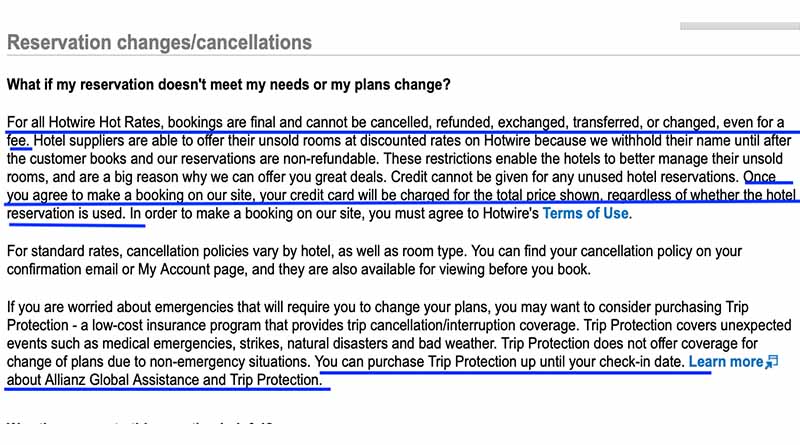 Huffman did not have insurance.

And yet Hotwire agreed to refund his hotel rate as a goodwill gesture.

Hotwire approved his hotel refund — so what’s the holdup?

So what’s the problem? Hotwire said it would send him the money but then took its time, according to Huffman.

Why the delay? Let’s take a look at the letter from Huffman’s physician:

Please be advised that this patient was unable to travel during the dates of July 21-25 due to a medical condition. Please contact my office with any questions.

If I were reviewing this message, I would probably wonder about the specifics of the condition that led to surgery. But, more to the point, Hotwire’s instructions asked Huffman to email his documents to a special address. It appears he did not send his documents to the correct place.

In fact, Hotwire did not promise him anything. It only said it would review his case:

We understand you, an immediate family member or travel companion has been under the care of a physician and are no longer able to use your reservation as planned. We know this can be a difficult time and that’s why Hotwire has a policy which allows us to refund your booking after receiving validating documents.

…
After emailing the required documents, you will receive an email response from Hotwire within five business days advising you of the outcome of our review.

How to get a hotel refund approved

What follows is an agonizing exchange between Huffman and Hotwire, in which he asks for his refund but only gets a form letter:

Thank you for reaching out to Hotwire and to follow up the refund of your reservation.

Unfortunately, we have not received the documents you’ve sent. We apologize if it’s taking longer than expected to be able to process the refund. We need the medical documents to be able to validate your request.

Again, Hotwire didn’t get the documents because it appears Huffman was sending the email to the wrong address.

There’s a right way to handle a refund request. I outline the procedures in this story and I also list the executive contacts for Hotwire on our site.

My advocacy team reviewed his paperwork and quickly identified the problem. Huffman had sent his documentation to the wrong address. Our advocate Michelle Couch-Friedman contacted Hotwire on his behalf to see if our contact could jumpstart the process.

And here’s where things got weird.

Our Hotwire executive contact confirmed that her team would contact Huffman and get his information and send his hotel refund through Paypal. But in the meantime, it seems Huffman filed a credit card chargeback — meaning that Hotwire no longer had the money and couldn’t return it.

Then, after Hotwire already confirmed that he would get the refund, and Michelle let Huffman know the good news, things got even weirder. After a week, Huffman grew tired of waiting and sent the following email to Hotwire:

I contacted PayPal and they essentially said you LIED about the transaction: that it doesn’t take 1-2 billing cycles. It only takes a DAY, so PLEASE WIRE THIS MONEY TO ME IMMEDIATELY OR I WILL FILE SUIT AGAINST HOTWIRE FOR FRAUD. .

Certainly not the right move. A goodwill gesture is exactly that — a gesture of goodwill. Hotwire was well within its rights to keep all of Huffman’s money. There is no fraud case.

When Michelle pointed this out to Huffman, he became argumentative. He finally ended the discussion with a note that said, “Our communications are terminated. Bye.”

Huffman ignored our advice about resolving a consumer complaint, relying on legal threats and chargebacks when attention to detail and politeness would have been far more effective. I thought I’d seen it all, but this hotel refund case is one of the strangest ones of the new year.